Bernard Bosanquet, the man who invented the googly and changed spin bowling forever, was born in October 1877. In the 1926 Wisden Almanack he explained his mysterious art and how it came into being.

The visit of the South African team has revived interest in the googly. Poor old googly! It has been subjected to ridicule, abuse, contempt, incredulity, and survived them all. Nowadays one cannot read an article on cricket without finding that any deficiencies existing at the present day are attributed to the influence of the googly. If the standard of bowling falls off, it is because too many cricketers devote their time to trying to master it, instead of carrying on with the recognised and hallowed methods of bowling. If batsmen display a marked inability to hit the ball on the offside, or anywhere in front of the wicket, and stand in apologetic attitudes before their wicket, it is said that the googly has made it impossible for them to adopt the old aggressive attitude and make the old scoring strokes.

But, after all, what is the googly? It is merely a ball with an ordinary break produced by an extraordinary method. It is quite possible and, in fact, not difficult, to detect, and, once detected, there is no reason why it should not be treated as an ordinary break-back. However, it is not for me to defend it. Other and more capable hands have taken it up and exploited it, and, if blame is to be allotted, let it be on their shoulders. For me is the task of the historian, and if I appear too much in the role of the proud parent, I ask forgiveness. In view of many conflicting statements, it may be of interest if I recapitulate the inception and development of the googly.

Birth of the googly

Somewhere about the year 1897 I was playing a game with a tennis ball, known as Twisti-Twosti. The object was to bounce the ball on a table so that your opponent sitting opposite could not catch it. It soon occurred to me that if one could pitch a ball which broke in a certain direction and with more or less the same delivery make the next ball go in the opposite direction, one would mystify one’s opponent. After a little experimenting I managed to do this, and it was so successful that I practised the same thing with a soft ball at Stump-cricket. From this I progressed to a cricket ball, and about 1899 I had become a star turn for the luncheon interval during our matches at Oxford. That is, the most famous batsman on the opposing side was enticed into a net and I was brought up to bowl him two or three leg-breaks. These were followed by an off-break with more or less the same action. If this pitched on the right place it probably hit him on the knee, everyone shrieked with laughter, and I was led away and locked up for the day. 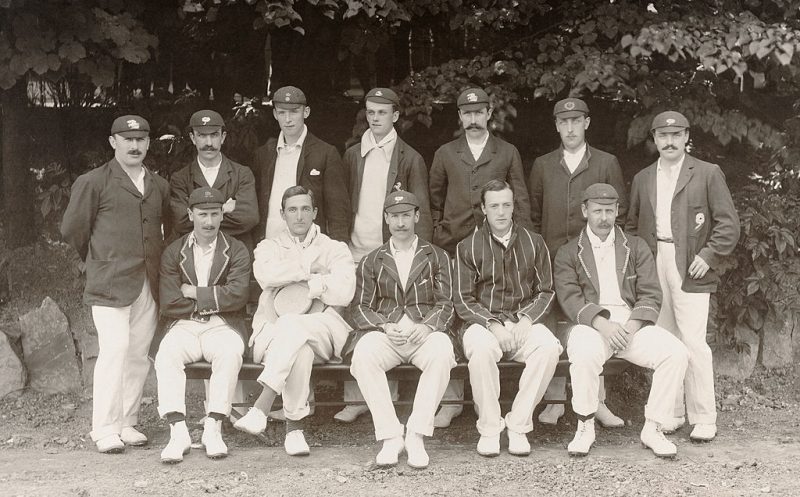 The England team that faced off against Australia at Headingley, July 3, 1905. Bosanquet is second from right in the front row

During this and the following year I devoted a great deal of time to practising the googly at the nets, and occasionally bowled in unimportant matches. The first public recognition we obtained was in July, 1900, for Middlesex v. Leicestershire at Lord’s. An unfortunate individual (I believe it was Coe) had made 98 when he was clean bowled by a fine specimen which bounced four times. The incident was rightly treated as a joke, and was the subject of ribald comment, but this small beginning marked the start of what came to be termed a revolution in bowling.

From then on progress was slow but sure. We achieved marked success at Nottingham in August, and attracted a certain amount of notice, and my old friends Gregor McGregor and Plum Warner were fully alive to future possibilities. At that time I myself always endeavoured to convey the impression that the result was unintentional and accidental, as I did not wish batsmen to be too much on their guard. I even persuaded Plum not to write about it, which he nobly refrained from doing for nearly a year! By that time, however, human nature had to be served, and, following on other successes I obtained, he and others began to write it up, and considerable attention was attracted to it as a new development.

At this stage I would like to say that it was in reality nothing new in itself. Many leg-break bowlers (including Attewell and E. R. Wilson to my knowledge) had dismissed batsmen with balls which, intended to break one way, had done the opposite. The sole difference was in achieving this result at will; and although leading cricketers and the more knowledgeable critics appreciated that this could be done, it was some time before the ignorance and prejudice of others was overcome. The googly after all (bowled by a right-handed bowler to a right-handed batsman) is nothing more nor less than an ordinary off-break. The method of delivery is the secret of its difficulty, and this merely consisted in turning the wrist over at the moment of delivery far enough to alter the axis of spin, so that a ball which normally delivered would break from leg breaks from the off. That is all there is to it.

To revert to ancient history, from the moment it became generally recognised that a ball could be bowled which left the batsman in doubt as to which way it would break, the fun began. I must confess that in the beginning I persevered with the googly chiefly because I found that the lot of an average fast-medium bowler on a county side was not a happy one. It generally meant being put on under a sweltering sun, on a plumb wicket, when the other bowlers had failed and the two batsmen were well set.

If one was lucky enough to get a wicket, the original bowlers resumed, and unless the same conditions recurred one was not wanted again. If the wicket was difficult, one was never thought of. As a result, partly from a natural disinclination to work hard on hot days (how much more pleasant to walk slowly up to the wicket and gently propel the ball into the air), and partly, I hope, from a sneaking ambition to achieve greater things, I persevered with the googly. It took any amount of perseverance, but for a year or two the results were more than worth it, for in addition to adding to the merriment of the cricketing world, I found that batsmen who used to grin at the sight of me and grasp their bat firmly by the long handle, began to show a marked preference for the other end!

Contemporary history has recorded the progress of the googly from this period onwards, and I do not propose to enlarge any further on my personal connection with it. There are a few incidents, however, which stand out vividly.

There was the first time it was bowled against the Australians – at Lord’s late one evening in 1902 – when I had two overs and saw two very puzzled Australians return to the Pavilion. It rained all next day, and not one of them tumbled to the fact that it was not an accident. The first googly ever bowled in Australia, in March 1903; Trumper batting, having made 40 in about 20 minutes. Two leg-breaks were played beautifully to cover, but the next ball (delivered with a silent prayer), pitching in the same place, saw the same graceful stroke played – and struck the middle-stump instead of the bat! W. Gunn stumped when appreciably nearer my wicket than his own! Arthur Shrewsbury complaining that it wasn’t fair. These are a few impressions.

There are two or three bright patches I can recall, as, for instance, in 1904, when in three consecutive matches I got five wickets in each innings v Yorkshire, six in each v Notts, and seven in each v Sussex (including Fry and Ranji). There was one week in 1905 in which I had eleven wickets v Sussex at Lord’s (and got 100 in each innings. The double feat is still a record); and during the next three days in the first Test match at Nottingham I got eight out of nine wickets which fell in the second innings, the last man being out just before a thunderstorm broke – and even then if Trumper could have hobbled to the wicket it meant a draw! This recalls the fourth Test match at Sydney in 1904, in which at one period in the second innings I had six for 12, and then got Noble leg-before, and never appealed. The last man was in, and the match won, and there were reasons!

I have the balls used in these two matches, both presented to me by my old friend Dick Lilley, the best wicketkeeper in a big match we have known. There is a good story of Lilley (whom I last saw pigeon-shooting at Monte Carlo in 1914!) in the Gentlemen v Players match at the Oval, in 1904. I got a few wickets in the second innings. Then one of the Pros came in and said: “Dick’s in next; he’s calling us all a lot of rabbits; says he can see every ball you bowl. Do try and get him, and we’ll rag his life out.” Dick came in. I bowled him two overs of leg-breaks, then changed my action and bowled another leg-break. Dick played it gracefully to fine leg, and it removed his off-stump! I can still hear the reception he got in the dressing-room.

If the preceding lines seem egotistical, let the following be my excuse. Last year a great pal of mine, with whom I have played a lot of cricket, said at a dinner-table: I know old Bose invented the googly and that sort of thing, but did he ever get any wickets? I can truthfully say that after 1905 he didn’t, and one over subsequently bowled at Harrow elicited about a quarter of a column of ribald comment in a newspaper, which finished the googly so far as I am concerned, and I had better finish this article.