Clyde Walcott was one of the three Ws, a trio of great batsmen who played for West Indies in the 1950s. In 1958, he was a Wisden Cricketer of the Year.

One of the pillars of West Indies cricket in the last ten years has been Clyde Leopold Walcott, the brilliant all-rounder, who was born at Bridgetown on January 17, 1926. When, in 1951, Wisden paid tribute to Frank Worrell and Everton Weekes, the Editor remarked in his preface: “My only regret was that room could not be found for C.L. Walcott.”

Now, the opportunity is taken to include the third member of the famous W triumvirate, all of whom first saw the light of day in that lovely sunny island of Barbados. All were born cricketers. Walcott grew up in a cricket atmosphere; his father and two uncles played club cricket and were keen enthusiasts. 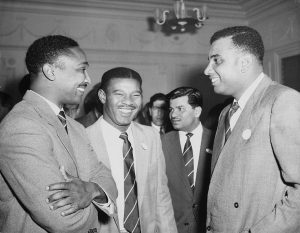 As far back as he can remember, Walcott had a bat in his hand, and he has always played cricket because he loves the game and it gives him immense enjoyment. With his upright style and general command, he gives the impression that he was coached during his early development, but he says that is not so. There are no coaches in Barbados. All he can remember is receiving some advice from the games master at Combermere School, where he was in the first team with Worrell at the age of 12. The same year, he went to Harrison College, the only public school in the island, and it was at that time that he decided to take up wicketkeeping, because he could not get runs and the college needed a stumper. Walcott filled the vacancy.

That such a small island as Barbados – area 166 square miles; population 228,000 – should turn out so many excellent cricketers is because everything there is right for cricket. Everyone plays on perfect turf pitches; young batsmen can make their strokes confidently and bowlers must be accurate in length and direction.

Walcott progressed so rapidly in this environment that on his 16th birthday, he made his first-class debut for Barbados. It was against Trinidad at Bridgetown. He went in first and was dismissed for eight and nought. He played with his elder brother, Keith, for Barbados and the Spartan club at a time when E.A.V. Williams and J.E.D. Sealy were coming to the fore.

Standing 6ft 2in and turning the scales at 15st (now he is slightly heavier), Walcott has a commanding presence on and off the field. Modest and quietly spoken, he remains completely unspoiled despite all the publicity he has received for his wonderful achievements. His powerful physique enables him to drive with tremendous force. He has a peerless off-drive and a dazzling square cut, and is no less adept with the pull and hook, so that on his day he is rarely lost for a stroke. In addition, he is an accomplished slip fielder, and in his younger days, he was the Test wicketkeeper, as well as a really good fast-medium bowler. 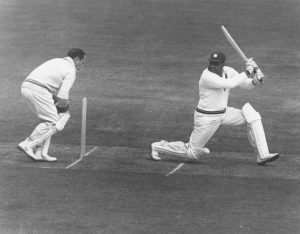 When West Indies resumed Test cricket after the war with the visit of the MCC under G.O. Allen in 1947-48, Walcott had already placed his name among the records. Two seasons earlier, he made 314 not out on the mat at Trinidad, establishing with his schoolmate Worrell (255 not out) the world’s highest partnership of 574 for Barbados. The following season, those figures were surpassed by Vijay Hazare and Gul Mahomed, the present holders; they put on 577 for Baroda against Holkar at Baroda.

Walcott signalised his first appearance against MCC by hitting 120 for Barbados, but although he played in all four Tests, his highest score in seven innings was 45. He had no regular place in the batting order; instead, he was a valuable member of the side by virtue of his safe wicketkeeping.

West Indies broke fresh ground in 1948-49 when they visited India and astonished their hosts by their batting strength. Six of the side shared eleven centuries in the five Tests and Walcott, the wicketkeeper, claimed two. Next came the tour of England in 1950, when West Indies, winning three of the four Tests, firmly established themselves among the great cricketing powers. As many as 37 centuries were hit for them, and Walcott and Weekes, seven each, shared the honours. 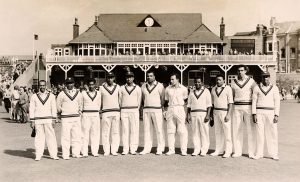 It was Walcott’s 168 not out at Lord’s which turned the scales and brought them their first Test victory in England – a day followers of West Indies cricket will long remember. To get that innings in its true perspective, one should mention that at that time, it approached within a single the highest score by a West Indies player in Tests in England – 169 not out by George Headley in 1933.

And so to Australia in 1951-52. That journey was full of hope. Some said it was for the Championship of the World, but against the shock, bumping attack of Lindwall and Miller, West Indies suffered a setback. They won only one of the five Tests and Walcott, although gladly relieved of the job of wicketkeeper, figured among the failures. Nevertheless, he soon benefited by abandoning his position behind the stumps, and when the side moved on to New Zealand, he hit three centuries in the four matches, including one in the Tests.

Back in his own islands, Walcott proceeded to perform such remarkable feats that he challenged Hutton for the title of the world’s best batsman. India, England and Australia, in turn, toured the Caribbean, and all their bowlers suffered from his merciless punishment. In five Tests against Hutton’s team, Walcott scored 698 runs, average 87.25, including three centuries, with 220 at Bridgetown, the highest in all his 38 international engagements. 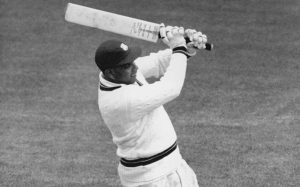 Facing Australia in 1955/56, Walcott performed feats achieved by no other player in history, when, both at Port-of-Spain and Kingston, he hit a century in each innings of the two Tests. Lindwall, Miller, Johnson, Archer, Benaud and Johnston all tasted the full fury of his devastating hitting. His aggregate of 827 was the highest for West Indies in any rubber, and yet he was on the losing side, for Australia won comfortably, gaining three victories, with two matches drawn.

Walcott had hit 12 hundreds in his last 12 Tests. Small wonder he was appointed vice-captain for the tour of England last summer, but he found the conditions vastly changed from 1950. No longer were the pitches at Lord’s, Leeds and The Oval discouraging to bowlers. Unfortunately, he strained a leg muscle when batting beautifully in the first Test at Birmingham and for some weeks laboured under a big handicap, but against the counties in May and August, he looked as good as ever. Indeed, he finished fifth in the full season’s averages, with only May, Worrell, Cowdrey and Graveney above him.

Walcott is a great favourite in Lancashire, where he played for Enfield from 1951 to 1954. Since then, he has gone to live in British Guyana, where he is coaching their young players, as well as playing for the colony.