In this article from the 2018 Wisden Cricketers’ Almanack, Richard Whitehead heads down memory lane courtesy of the British Film Institute’s digitised archive of cricket footage.

In the shadow of a sun-scorched Italian mountain, a group of men wander among neat rows of gleaming gravestones. Their dress – Sunday-best smart – suggests respect. They find the stone they are seeking, carefully lay a bunch of white roses, and stand back in contemplation. The camera focuses on the inscription: “Captain Hedley Verity. The Green Howards. 31st July 1943. Age 38.”

It is September 1954. Alongside the England captain, Len Hutton, are Yorkshire team-mates Vic Wilson and Bob Appleyard, and a group of journalists, including the former fast bowler Bill Bowes, Verity’s close friend. Bowes, now a writer for the Yorkshire Evening News, spent three years in a North African prisoner of war camp. It is hard to imagine how painful this moment must be. 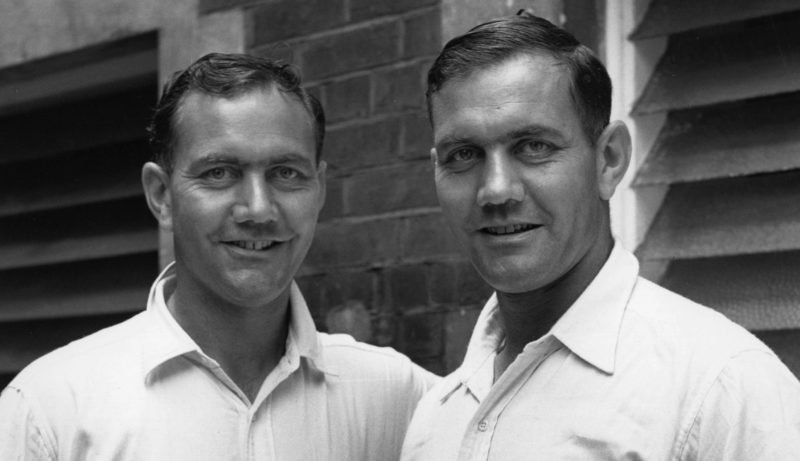 The man behind the cine camera at the Caserta military cemetery is a Bedser, though whether it is Alec or Eric, who accompanied his twin on every tour, is uncertain. The MCC party en route to Australia had first called in at Naples, 45 minutes south of Caserta.

The 1954-55 Ashes was to be Alec’s final tour, and proved a chastening experience, but he (or Eric) kept the camera rolling throughout one of the most celebrated of all England series. The twins would have intended the footage for private use, or to give friends back in Woking a glimpse of far-off lands. They would have been astonished to discover that, more than six decades on, those flickering images are available to millions.

The collection is rich and diverse. There are Test stars, county toilers, pioneering women, flinty northern league pros, village enthusiasts. Some clips last a few seconds, some several minutes, some up to an hour; many are beguiling.

Cine films such as the Bedsers’ are an irresistible draw – an opportunity to see cricketing greats amid relaxed informality. As well as the travel, the social events and the golf, “Alec Bedser Cricket Home Movies” – as the BFI call them – give us a chance to study the bowling of Brian Statham, Frank Tyson, Johnny Wardle and Bob Appleyard. There is also slow-motion footage of Alec’s own famously muscular action. 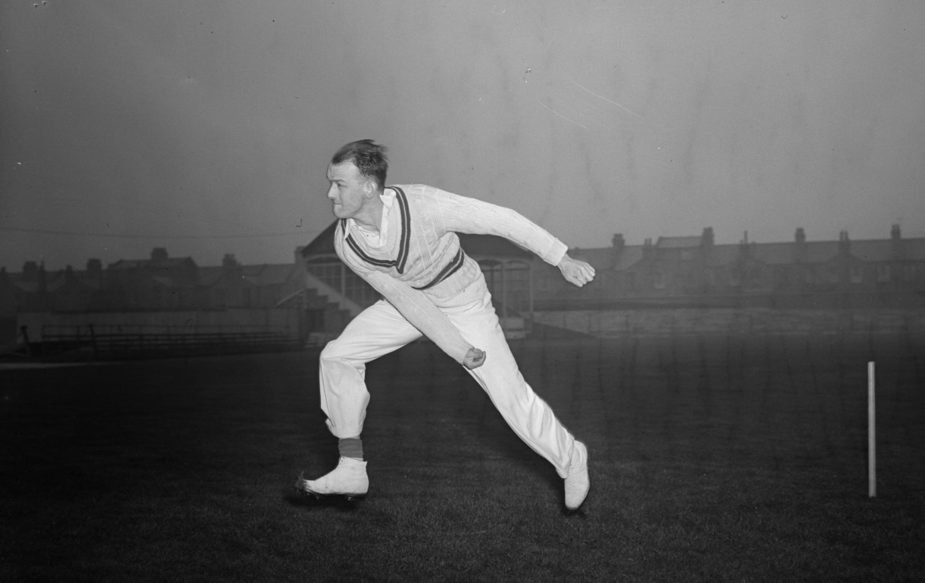 An earlier cinematic tour diary, shot by Maurice Allom on the 1930-31 trip to South Africa, captures all the japery, including captain Percy Chapman blatantly cheating in fitness drills on the ship’s deck.

Perhaps inspired by the Bedsers, Wardle wielded his own camera on another trip to South Africa, in 1956-57 – one of three Wardle productions available at the BFI site. He confirms what a leisurely business it was: the next cocktail party or tourist outing seldom seems far away. And he gives a glimpse of the ugly truth of 1950s South Africa, photographing a segregated beach. 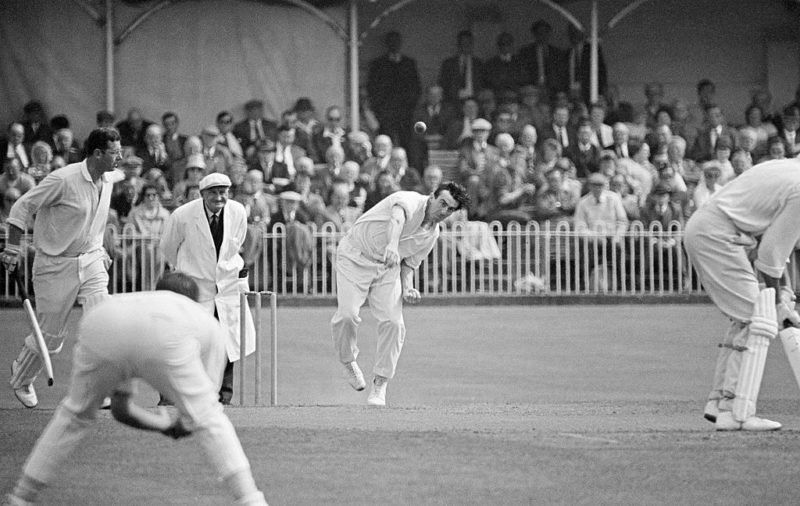 Later, Wardle – recently sacked by Yorkshire and dropped by England, and now working as a columnist – performs a service for cricket historians by filming some of the Australians’ dubious actions during the controversial 1958-59 Ashes. He also has footage of his old team-mate and rival Tony Lock’s questionable quicker ball; by way of antidote comes the thrilling purity of Fred Trueman’s run-up and delivery.

Trueman crops up several times in an amble around the archive, poignantly so in a short black and white film of Yorkshire’s final game in the 1968 Championship, against Surrey at Hull’s Circle Ground. There is some priceless action: captain Brian Close fielding inches from the bat with his usual cavalier regard for health and safety; slow left-armer Don Wilson’s bouncing, balletic stride; and Trueman, with a shorter approach than in his pomp but still a stirring sight. There is no sound, and it requires a glance at Wisden to reveal that Yorkshire’s win in the dying minutes completed a hat-trick of titles. Nor do you learn that Trueman, who bowled six wicketless overs in each innings, retired at the end of the season.

Longer films include a stunning 1970 documentary called The Summer Game, narrated in reverential tones that do justice to some evocative images: “Cricket, the ever changeful, changeless game.” There are shots of West Indies at Lord’s in 1969; of the Sussex team arriving by coach at New Road, with Tom Graveney waiting in the car park to welcome them; and of county action at Southampton’s old Northlands Road and at Bath. 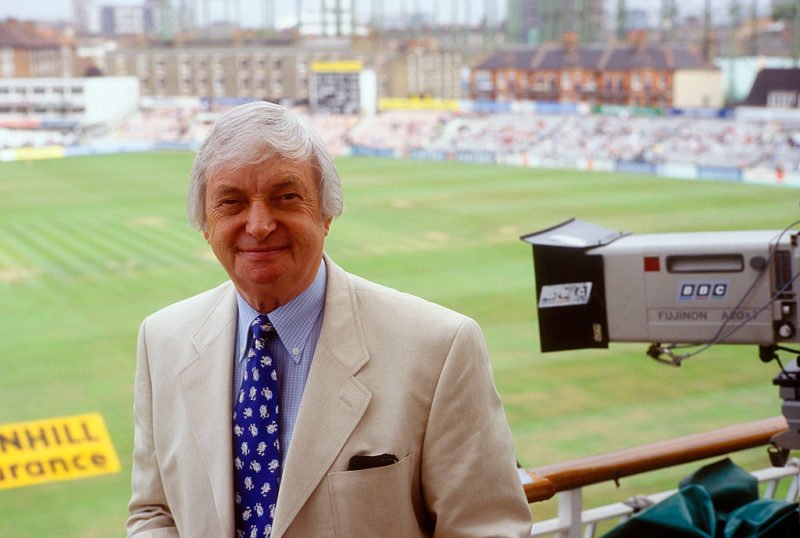 Richie Benaud – the voice of cricket

Cricket on Test, made in 1965 as part of the Rank Organisation’s Look at Life series, is narrated by Richie Benaud and, though just nine minutes long, contains gorgeous footage of the men of Nettlebed CC in Oxfordshire preparing for, and playing in, a Saturday fixture. The club president – arriving on horseback to add a whiff of glamour – is the travel writer Peter Fleming, brother of Ian.

Benaud’s attention then switches to Lord’s and the rituals of a county match against Yorkshire. If flats were to be built on these prime acres of London real estate, he reveals, it could produce an instant windfall in the region of £2.5m, “before collecting the rent”.

From the earliest film (Ranji in the nets at Melbourne in 1897) to Ian Botham discussing his poor form in the summer of 1980 at Taunton (“Does Lester Piggott ride a winner every day?”) the archive offers a richly contrasting perspective on cricket. There are few better ways to lose an afternoon.