EW Swanton, the Cricket Correspondent of The Daily Telegraph, was one of the most influential as well as one of the best-known cricket journalists. His Wisden obituary in 2001 celebrated a remarkable career.

EW Swanton was the most influential and most durable cricket writer of the 20th century. In the columns of the Daily Telegraph, he was always EW Swanton; to his friends and enemies alike, he was “Jim”. There were plenty of enemies and he was called many other names besides over the years, but he was never ignored. In the 30 years after World War II, as the Telegraph cricket correspondent, he carried an authority both in print and in person that perhaps no writer can have surpassed in any sport.

And the glory never faded. In a quarter-century of nominal retirement, he continued to write columns that were read with eagerness and some trepidation in the game’s committee-rooms. In an unusual moment of self-deprecation, Swanton cheerfully referred to himself as a dinosaur. In fact, he was the reverse: he hated many of the changes in cricket, but he adapted to them, and retained the ability to comment on them confidently, relevantly and pertinently without ever losing sight of cricket’s eternal values – hence his enduring importance.

Swanton was a walking database, encompassing almost the whole of 20th-century cricket. He believed he had been taken in his pram to see WG Grace batting for London County, and vividly recalled having watched Surrey v Yorkshire in the two-day Championship season of 1919, and the Oval Test of 1921. At his school, Cranleigh, he played just once for the First Eleven. Then – having decided not to follow his father on to the Stock Exchange – he went straight into journalism, aged 17, and graduated from a menial job at the Amalgamated Press to the Evening Standard in 1927.

He soon found himself as the rugby correspondent, but wrote regularly on cricket and began reporting Tests in 1930. In May 1932, Swanton was told he would be sent on the Ashes tour the following winter, a brave and novel idea for any newspaper as the norm had been to rely on news agency reports. Before then, however, he was sent to Leyton, and was there when Holmes and Sutcliffe scored 555 and broke the world record for an opening stand. 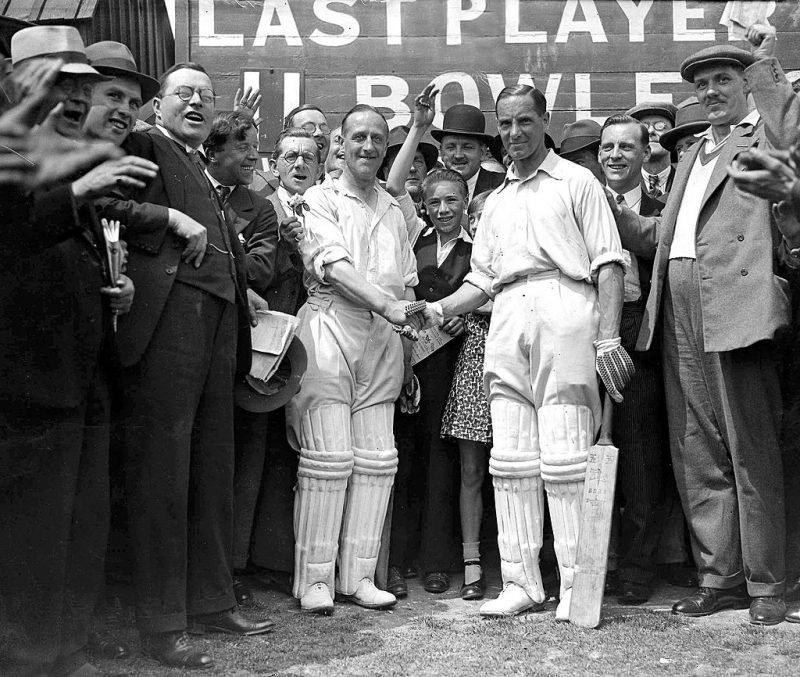 Unfortunately, so were the rival London papers: the Evening News and The Star. Their correspondents got ahead of him in the queue for the only telephone; his story missed an edition – the ultimate humiliation for a journalist – and the Standard began to think that if this youngster could not report the news on time from Essex, he would hardly manage it from Australia. They sent their tennis writer, Bruce Harris, instead.

It turned out to be the most controversial tour of all time, but hindsight and history suggest that, if the British public had understood better what was going on, England’s bodyline strategy could have been stopped. That would have required the presence of a knowledgeable and fearless correspondent: Swanton, for instance. It is true that much of that hindsight has been provided by Swanton himself, but it is none the less plausible.

This was his only major journalistic setback. By now, he was becoming a well-known sporting man-about-town and, as social-climbing was not the least of his gifts, he made all kinds of useful connections, both off the cricket field and on it. He went on tour to North America with Sir Julien Cahn and founded his own touring club, the Arabs, still going strong, which claimed in 1935 to be the first cricket team to travel by air: to Jersey. As a competent, even inventive batsman, if a rather unathletic one, he was invited to play for Middlesex: his first game for the Second Eleven was Denis Compton’s last before his promotion to higher things, and they put on 100 together.

In 1937 and 1938 he played three first-team games, all against the universities, with a highest score of 26. HS Altham asked him to collaborate on his second edition of A History of Cricket, and Swanton was also starting to broadcast: a modest contract from the BBC enabled him to go on the 1938/39 tour of South Africa.

When war came, he joined the Bedfordshire Yeomanry. He was sent to Singapore, wounded and was in hospital when the Japanese overran the colony. Swanton was a captive for more than three years, carrying with him a battered 1939 Wisden (marked “Not subversive” by a Japanese censor). His weight went down from 15 stone to just over ten and he was left with a withered left shoulder and upper arm from an attack of polio (“It hasn’t improved a golf-swing which was hardly a thing of beauty in the first place,” he wrote later) and a deepened faith, which led him to spend the first six years after the war living in Pusey House, Oxford, a major centre of Anglo-Catholicism.

He might have turned to the priesthood, but worldly success intervened. After a disastrous experiment with an amiable golfer called Sir Guy Campbell, the Telegraph needed a new cricket correspondent, and Swanton was appointed in time for the second post-war Test, against India at Old Trafford. A few weeks later he was on board ship en route for the 1946/47 Ashes tour.

And so Swanton’s grand reign began. Cricket was higher in public affection than ever before. With the Morning Post closed, The Times sale still tiny and The Guardian based in Manchester, the Telegraph was the paper of choice for the cricket-reading classes of Middle England, and its correspondent was bound to be a power in the game. 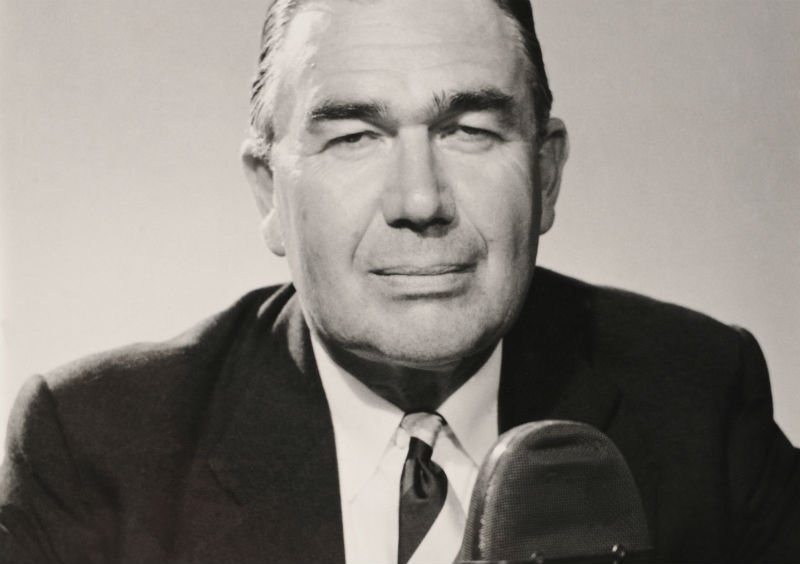 Furthermore, Swanton was a regular broadcaster whose close-of-play summaries are still widely held to be the best there have been. In print and on air, he reported the facts with little colour or embellishment, which distinguished him from Neville Cardus in print and John Arlott on air.

His literary style was basic – “halfway between the Ten Commandments and Enid Blyton”, as JJ Warr famously put it. But that suited the Telegraph, which disapproved of Cardusian fancy. Just before he died, Swanton recited his writing method: “First, briefly, the basic facts – what happened. Next, a critical view – why it happened.” Finally, came the chronological detail, which grew in length once newsprint came off the ration. The significant part was the critical view, which was always delivered magisterially, if not pontifically. Part of its power came from Swanton’s own sonorous voice and air of grandeur. But he could not have carried off the act if he had not had a profound – and ultimately matchless – knowledge of cricket and cricketers.

Though he was imbued with the values of cricket’s establishment, he was often a voice for change. He welcomed overseas players in the County Championship, and one-day cricket. (“This ‘instant cricket’ is very far from being a gimmick,” he wrote after the first Gillette Cup final in 1963, “and there is a place in it for all the arts of cricket.”) Swanton was appalled when Gloucestershire sacked Tom Graveney as their captain in 1960 in favour of the Old Etonian, Tom Pugh, and was an early convert to the idea of boycotting South Africa over apartheid. He had become uneasy on the 1956-57 tour, and his strong connection with the West Indies – he led two private tours there and had a holiday home on Barbados – helped propel him into the progressive camp. He abhorred sledging, coloured clothing and the four-day Championship.

It was his personal style that brought him the most detractors, and he did not always treat social inferiors graciously. The historian Rowland Bowen rechristened him Pomponius Ego. Ray Illingworth remarked that he was too snobbish to travel in the same car as his chauffeur. Swanton reported only rarely from the more down-market county grounds: he is believed to have visited Leicester and Northampton only once each, and these occasions had to be treated like state visits, with elaborate preparations so that both he and his amanuensis would not have to endure routine privations. 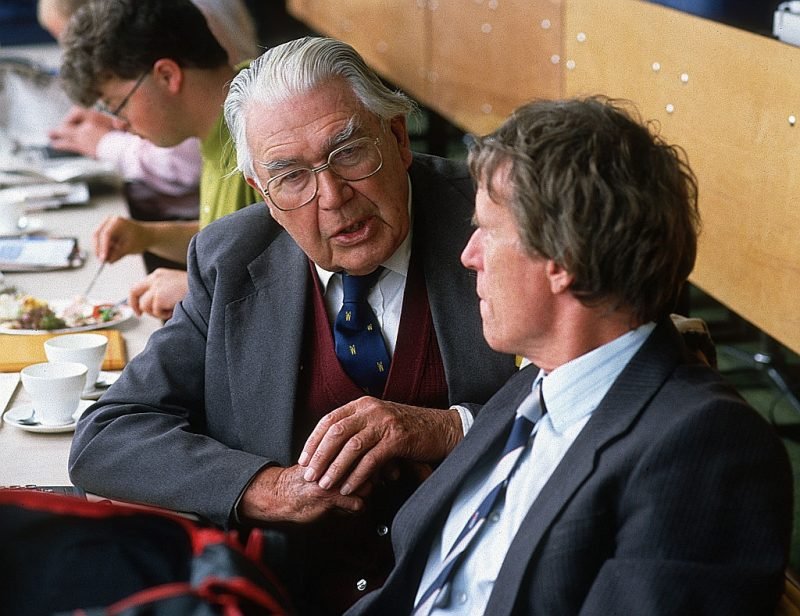 EW Swanton was a much nicer man in old age

He expected a gin and tonic on cue. Once, when told the bar had run out of ice, he responded irritably, “Didn’t you tell them who it was for?” This is a well-sourced story. The Telegraph sub-editors were not allowed to change a solitary comma of his copy, and they waited gleefully for his mistakes. These were, however, infrequent. His excesses were softened by both his belated marriage, in 1958 – to Ann Carbutt, a widow and an accomplished pianist and golfer – and the passing years. He was a much nicer man in old age. As Lord Runcie said at his funeral: “The solemnity, prickliness and, yes, arrogance that were part of the serious perfectionist gave way to the gentle self-mockery and kindly wisdom which never seemed to fail us.”

After retirement from the Telegraph in 1975, he still seemed ubiquitous. He wrote regularly in the paper and for The Cricketer, where he was editorial director from 1967 to 1988, and eventually acquired the unlikely magazine title of president. He became president of Kent in 1981. He chaired the MCC committee that helped build the indoor school at Lord’s, and was chairman of the arts and libraries committee, taking an abiding interest in the treasures of Lord’s. Only the presidency of MCC and a knighthood eluded him, and he probably thought wistfully about both.

His autobiography, Sort of A Cricket Person, was published in 1972, and was perhaps the last such book to include, without irony, a chapter called “The Gay Thirties”. Its closing chapter was “Last Over”, but his longevity meant there was time for an anthology of his clippings, As I Said at the Time, a book actually called Last Over and eventually a collection of his obituaries, Cricketers of My Time. It contained appreciations of 83 players, and he had known every one of them except George Hirst. He was still writing columns all through 1999, and though his initial-filled paragraphs about Oxbridge and Eton v Harrow seemed dated, his comments on the game remained astonishingly fresh.

His first nationally published article, in All Sports Weekly (under the byline Ernest Swanton, which he never used again), was an appreciation of Frank Woolley. He voted for Woolley – along with Constantine, Bradman, Sobers and Worrell – when asked to name his Five Cricketers of the Century for Wisden 2000, making the point that Woolley had scored his runs at 50 an hour. He applauded good, joyous, sporting cricket and, excluding only the very greatest of players, did more than anyone in the 20th century to ensure that good cricket prevailed.