Godfrey Evans is still recognised as one of the greatest wicketkeepers of all time. After his performances against West Indies in 1950, he was a Wisden Cricketer of the Year. His profile was written by Reg Hayter.

Even those who bemoan the lack of personalities in modern cricket agree that Thomas Godfrey Evans of Kent provides at least one exception. In an age in which possibly too much first-class cricket has caused some of the English game to look routine in character, Evans remains the embodiment of energy and enthusiasm.

To play with him is as much a tonic to the jaded cricketer as to watch him is a source of delight to the spectator, and of no man could it more truthfully be said that he has an ideal big-match temperament. Whether batting or keeping wicket, he brims over with unshakable self-confidence. In other spheres of life he is the same – tireless and aggressive, revelling in the action of the moment. To appreciate to the full his vitality it is best to see him abroad, chasing a ball to the boundary or sprinting to the dressing-room at the end of an exhausting day under a burning sun which has sapped the strength of the majority of his colleagues.

His constitution provides a source of wonderment even to his friends, and his hardiness is such that he was not kept out of the game through injury until he broke a finger towards the end of the 1950 season, by which time he had played in 30 Test Matches. In fact, previously his hands showed no sign of his calling.

In other spheres of life he is the same – tireless and aggressive, revelling in the action of the moment

Evans now belongs to Kent, but this was not always so. He was born on August 18, 1920, at Finchley, and even when his parents moved to Faversham, in Kent, the link with Middlesex was not severed completely. The house to which the Evans family moved bore the imposing title of Lord’s. From a boarding school at Deal, Evans moved to Kent College, Canterbury, where he quickly won colours for hockey, cricket and football and became captain of all three sports.

At cricket he shone chiefly as a batsman; his opportunities to keep wicket were restricted by the decision of the games master that another lad, much more bulky in build, could best be hidden in the field behind the stumps. When at Kent College, Evans played an innings of 132, which earned him the award of a Jack Hobbs bat, at that time presented by a London newspaper for exceptional schoolboy performances.

After leaving school, Evans for a time worked with his brother in the motor trade, but an ambition to become a professional cricketer so fired him that he spent many hours during the winter of 1936-37 at an indoor school at Acton. Next spring he attended the nets at Canterbury for a trial, as a result of which he joined the Kent staff as a wicketkeeper-batsman. 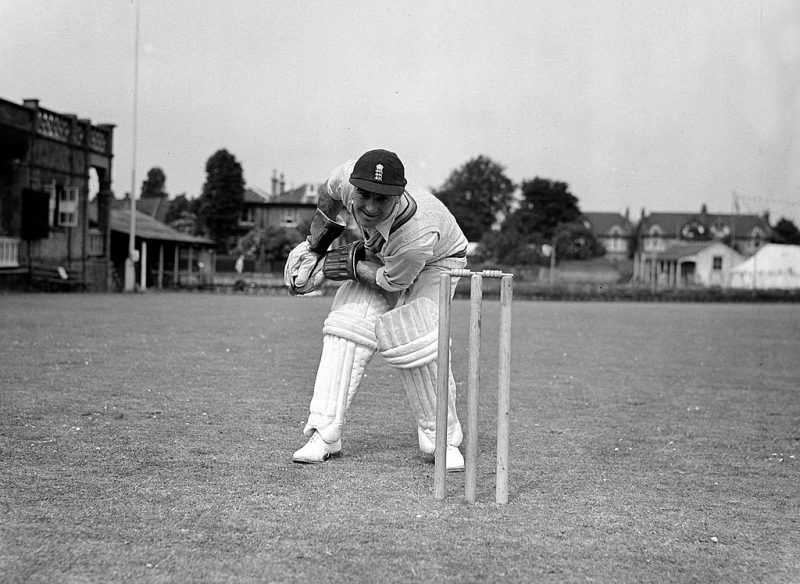 That summer Evans kept wicket in all Kent club and ground games, and a year later he was promoted to the Second XI, for whom he hit two centuries in the Minor Counties competition. At this period Evans was keenly interested in boxing, so much so that he accepted engagements, first as an amateur, then as a professional. In a brief but glorious ring career Evans won all his fights, most by a knockout, until the Kent Committee, anxious for the safety of his eyes, asked him to choose between boxing and cricket. Happily for English cricket, possibly also for Evans, he stayed in cricket.

In his apprentice years with Kent he received valuable help from “Punter” Humphries, the county coach, and useful tips from his two predecessors in the side, L. E. G. Ames and W. H. V. Levett, but he first won a place in the county team as a batsman midway through the 1939 season. Later that summer, when W. H. V. Levett joined the Army, Evans took over the wicketkeeping duties.

Outside Kent, however, little was heard of his wicketkeeping ability, but he came directly to the notice of the cricket authorities during the war after a Services match at Aldershot in 1942, in which he played against A. E. R. Gilligan the former Sussex and England captain. Gilligan contacted those at Lord’s who were organising charity games, and invitations to Evans followed immediately. By the time first-class cricket was resumed in 1946, Evans was recognised as England’s wicketkeeper of the near future. 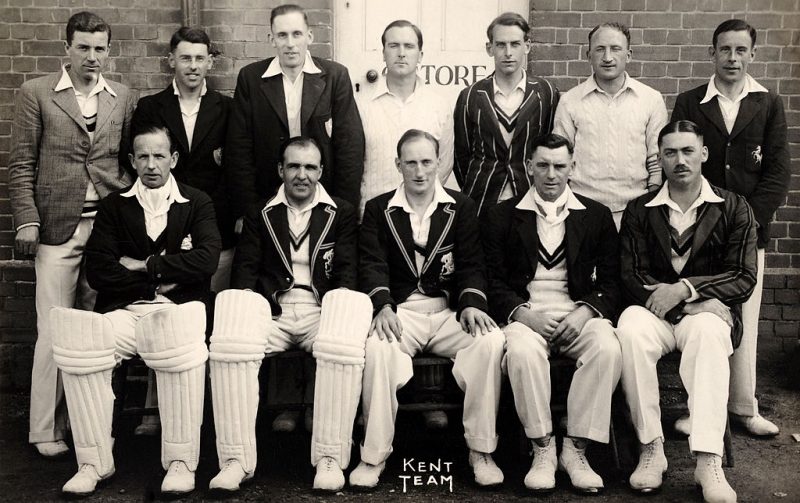 Kent county side from 1946; Evans is fourth from left in the back row

In his first full season of county cricket Evans won his England cap for the last Test with India, and that winter, as a member of W. R. Hammond’s side to Australia, he took part in the first of four successive M.C.C. tours. He missed the first Test in Australia but came in at Sydney for the second, which began a run of 22 consecutive Test appearances. In the Australian series Evans created another two world records.

He did not concede a bye until 1,024 runs had been scored – 659 in the second and 365 in the third Test – against England, and in the fourth, at Adelaide, he stayed longer, 95 minutes, than any batsman in Test cricket before opening his score. Playing a game foreign to his normal adventurous style, Evans batted two hours and a quarter in an unforgettable stand with Denis Compton which helped England to save the match. They made 85 together without being parted, Evans scoring his 10 off seven of the 98 balls bowled to him.

The following winter Evans went to West Indies, and in 1948-49 to South Africa, where he missed the last two Tests through a temporary loss of form, understandable enough in view of the non-stop nature of his cricket after the war. Refreshed, he regained his place in the England team next season, since when he has resumed his position as an automatic choice. Given good health and ordinary fortune, he looks still to be in the youth of his Test career.

On his 1950 displays Evans is without an equal in the world as a wicketkeeper. His performance in the Test Trial on a sticky pitch at Bradford deserved the description of classic. Not only is he safe in catching and lightning in stumping, but he has the additional virtues of inspiring the bowler and worrying the batsman. Evans helps bowlers to take wickets which normally they would not expect and few batsmen can dispel from their minds the nagging feeling that he is after them, tensed to pounce upon the least lapse of concentration or hesitation.

In batting, Evans prefers the hard-hitting game which comes so naturally to his ebullient character. He loves a battle and has the capacity to rise to the occasion, such as when he scored his maiden century in first-class cricket in England in 1950 during a rescue stand with T. E. Bailey in the first Test with West Indies. The more responsibility placed upon him, whether in Test or county cricket, the more is he likely to succeed. Kent, as well as England, captains have discovered this more than once.

The happy disposition which characterises Evans on the field does not disappear when the day’s play is over. He laughs his way through life, and those who are his friends laugh with him. Evans is married and has one son. He and his family live near Maidstone in a house appropriately called “The Wickets.”

Godfrey Evans went on to play 91 Tests and was one of the mainstays of the great England team of the mid-1950s. He took 173 catches and made 46 stumpings. He also scored 2,439 runs.