The career of Mike Denness, one of England’s unluckiest captains but a fine batsman and outstanding county leader, was assessed through his Wisden obituary in the 2014 Almanack.

It was Mike Denness’s lasting misfortune that his reign as England captain was sandwiched between Ray Illingworth and Tony Greig. He could not match Illingworth’s tactical intelligence or Greig’s hyperactive charisma – and suffered by inevitable comparison. Instead, Denness was consigned to history as the leader who withdrew from the line of fire during the 1974-75 Ashes, when Dennis Lillee and Jeff Thomson were at their most ferocious.

Yet this overshadowed the fact that, in 19 Tests in charge, he won more games than he lost, and scored four centuries. Denness was also the most successful captain in Kent’s history, leading them to six one-day trophies in five seasons.

In a glorious era for the county, a team that bristled with box-office names entertained large crowds shoehorned into the St Lawrence Ground. Amid the tension and euphoria, Denness was a leader of cool authority. “He never panicked once,” said Alan Knott. 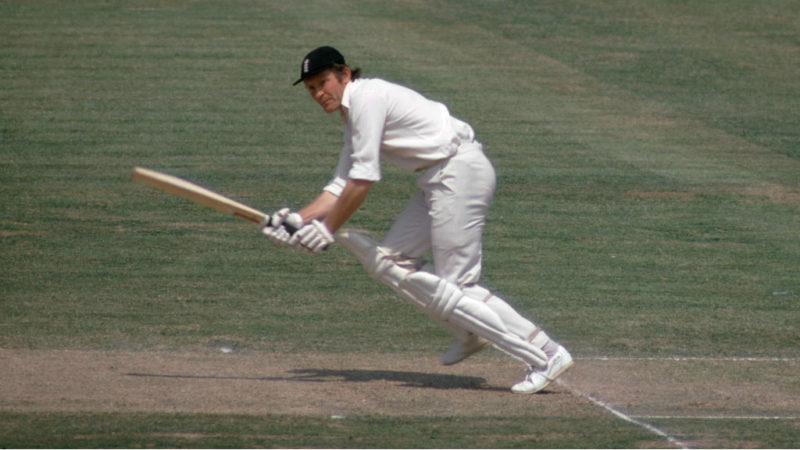 England’s Mike Denness scored 118 in the second Test against India at Lord’s, June 1974

An elegant, fluent batsman, either opening or in the middle order, Denness made almost 26,000 first-class runs at 33, and was a magnificent fielder. He was softly spoken and uncomfortable in the limelight, but firm, principled and determined – never more so than when, as an ICC match referee, he became embroiled in a huge row after censuring several of India’s biggest stars.

He was the first – and so far only – Scottish-born captain of England, and as a boy dreamed of representing Scotland at rugby, an ambition shared with his two closest friends at Ayr Academy, Ian McLauchlan and Ian Ure. They were a precocious trio: McLauchlan captained the national rugby team, while Ure became a football international.

Denness himself was an outstanding all-round sportsman – he won nine athletics events in one school year – but his focus switched to cricket when his father built a new family home just outside the boundary at Ayr Cricket Club.

He made his first-class debut for Scotland, aged 18, against Ireland in Dublin in 1959, scoring 47. Scotland teammate Jimmy Allan, once of Kent, kept his former county abreast of his progress, and Denness set his mind on Canterbury after a chat with E.W. Swanton when he spoke at Ayr CC’s centenary dinner. 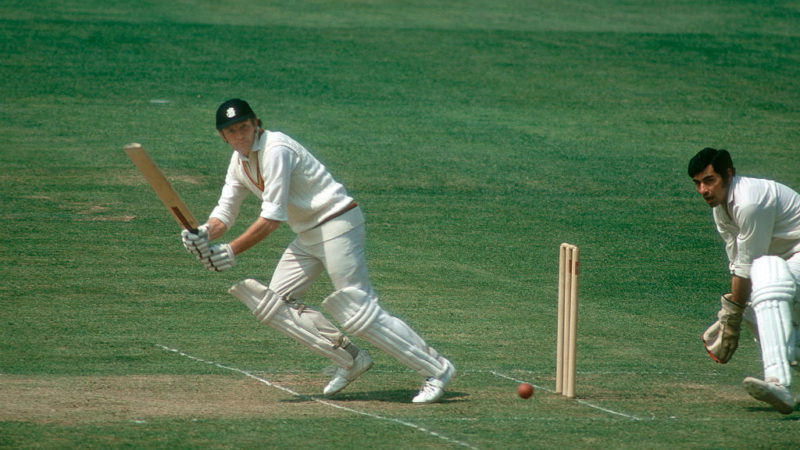 Denness joined Kent in 1961 and made his Championship debut against Essex at Dover in July 1962, when he was bamboozled by the wiles of Jim Laker. But he made his maiden half-century for them in the next match, and passed 1,000 runs for the first of 14 times the following summer.

International recognition came against New Zealand at The Oval in 1969. He took an agonising 43 minutes to get off the mark, before being dismissed for two, but he was called up again for the first match against the Rest of the World in 1970. His most notable contribution to that series, however, came at Headingley where, as an emergency fielder for the World XI, he took the short-leg catch that completed Eddie Barlow’s hat-trick.

A more satisfying achievement that year was Kent’s first Championship since 1913. Bottom of the table at the end of June, they responded positively to Denness as stand-in captain when Colin Cowdrey was on international duty. In 1972 he took over the leadership full-time, boldly promising the AGM at least one trophy a season. He delivered the John Player League in his first year, and got back into the England team as Tony Lewis’s vice-captain in India and Pakistan.

The Welshman and the Scot dubbed themselves the British Lions but, with a top score of 76 in India and 68 in Pakistan, Denness failed to cement a place, and did not feature in the six-Test summer of 1973. However, he continued to polish his CV at Kent with two more trophies and, when Illingworth was sacked after losing heavily to West Indies, the selectors asked Denness to take over for the return series in the winter.

India and Pakistan at home proved more straightforward: a lacklustre India lost 3-0, with Denness making centuries at Lord’s and Edgbaston, and only a wet late summer prevented an emphatic victory over Pakistan.

The squad to defend the Ashes in 1974-75 was missing Boycott, who had gone into exile, in part because of his lack of respect for the captain. And things got worse for Denness when he fell ill on the outward flight; it took three anxious weeks to diagnose and treat a kidney infection.

Poorly prepared for the first Test, he was given a taste of what was to come when his first ball, from Thomson, struck his shoulder. England suffered traumatic defeats at Brisbane and Perth and, although they improved in the third Test, Denness took the momentous decision to drop himself for the fourth, at Sydney.

He had scored 65 runs in six innings, even if he was not the only England batsman to have struggled. David Lloyd felt he had not properly recovered from his illness: “He played when he was not well enough.” 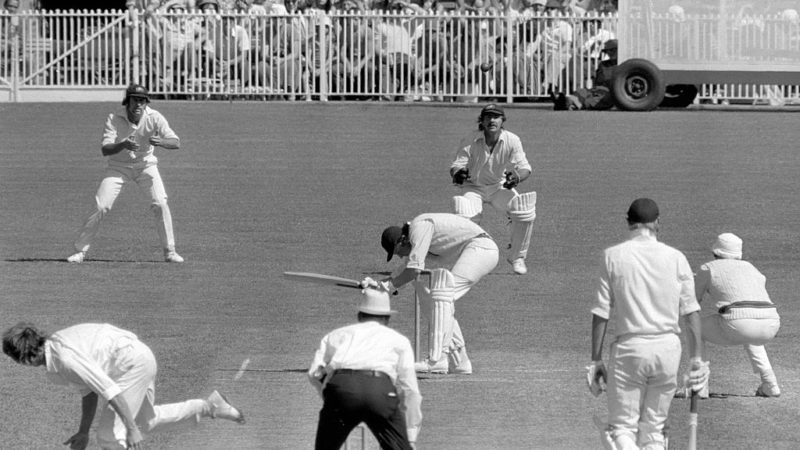 Seizing any opportunity to undermine the captain, the Australians greeted him with the new nickname “Will”. Lloyd explained: “It was short for ‘wilderness’ – because they said that’s where he always was.” Watching his team go out to field at Sydney was, Denness wrote, “undoubtedly the lowest moment of my life”. The match was lost, and so too the Ashes.

Though he returned with a half-century in the fifth Test, it was in another losing cause. Redemption of sorts came in the sixth, at Melbourne: Thomson was ruled out, Lillee broke down, and Denness made 188.

England gained a consolation victory, and there was another win and a big hundred soon after at Auckland. But Denness arrived home under intense scrutiny. His appointment for only the first match of the four-Test series against Australia in 1975 was hardly a vote of confidence, and he later said he regretted accepting the captaincy under such conditions. He put Australia in beneath grey Edgbaston skies, but his bowlers made little impact. When England replied, it rained after one over: on a damp pitch, they were bowled out cheaply twice.

Denness’s fate had been sealed, if not by the result then by a back-page exclusive from Jim Laker in the Daily Express on the second morning, which revealed that the selectors had disagreed with his decision to bowl first. Furious at the leak, Denness resigned immediately.

His Test career was over after 28 matches, in which he scored 1,667 runs at 39.69. He had struggled to unite the dressing-room but would have been an ideal one-day leader, said Keith Fletcher: “If the jobs had been divided in those days he would have been excellent.”

Denness imposed penalties on six Indian players, including Sachin Tendulkar for interfering with the ball without informing the umpires what he was doing

Welcomed back at Canterbury, he added another Benson and Hedges Cup and John Player League to the groaning trophy cabinet the following summer. While it was true that Kent were able to call on a formidable assembly of talent, Denness’s influence was critical. “We did things that are taken for granted now, but were cutting-edge then,” said all-rounder Graham Johnson. “We analysed the strengths and weaknesses of the opposition, discussed how to set fields, playing to everyone’s strengths.”

Denness was not a man for extravagant motivational speeches: his most appreciated asset was his serenity. “He never got ruffled,” said John Shepherd. Derek Pringle, a future team-mate at Essex, recalled being driven from Colchester to Blackpool by Denness, a trip that lasted seven hours because of a near-religious adherence to the speed limit. “He was the only one in the team who would have stuck to it,” said Pringle.

During the summer of 1976, Denness revealed plans for a gradual handover of the captaincy to Johnson, but soon discovered that elements within the club’s committee – and some in the dressing-room – wanted him to step down. After several weeks of undignified machinations, he resigned, and then announced he was leaving the club altogether. Johnson said: “Later in life I asked him about what had happened, but even then he would not tell me. He was a deeply honourable man.” 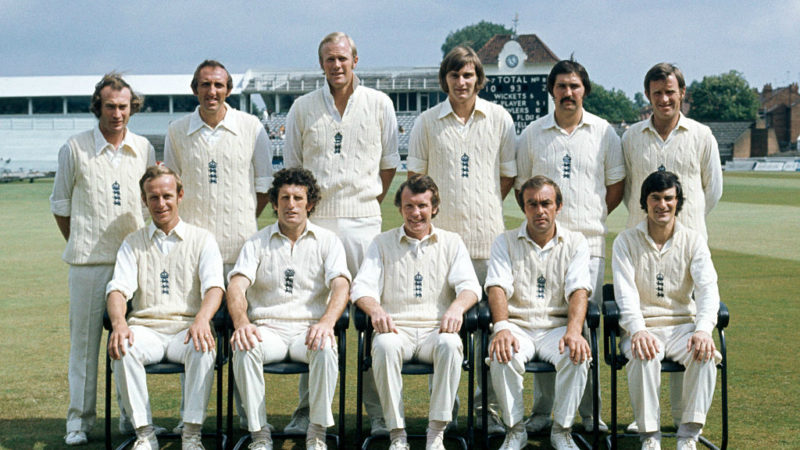 Fletcher gave him a warm reception at Essex, where his experience proved important to an emerging team. “We saw him as the final cog in the machine,” Fletcher said. “He was absolutely brilliant – an Essex man from the day he arrived.” Denness spent four years at Chelmsford, helping the club to a first Championship in 1979.

In 1996 he became an ICC match referee, and in November 2001 was caught up in an ugly dispute during the second Test between South Africa and India at Port Elizabeth. Denness imposed penalties on six Indian players, including Sachin Tendulkar for interfering with the ball without informing the umpires what he was doing. The punishment prompted outrage in India, and the BCCI threatened to bring their team home if Denness was not withdrawn from the third Test. The game went ahead, but Denness was denied entry, and the ICC declared the match unofficial.

In the 1990s, to the delight of both sides, there was a rapprochement with Kent and he became cricket chairman in 2001, resigning three years later in protest at an incident at Worcester when Andrew Symonds refused to acknowledge Ed Smith’s stand-in captaincy. Denness became club president in 2012 and, though far from well, he attended many county events, touring the tents at Canterbury Week. He died in his final week in office.