Ben Jones analyses a battle that meant a lot, while it happened.

Context. We call out for it, in cricket, at every opportunity. Why can’t this ODI series mean anything, we cry, as 20,000 people leap into the air in joy and fear. Why can’t this dead-rubber Test capture our imaginations like live ones, we moan, as we stand in line at the supermarket checking the score on our phones. Why don’t we care, we say, as we collectively show with every ounce of our beings that we all care, we all care enormously, if anything we all care a bit too much.

For the second time this summer, Jofra Archer was involved in a head-to-head battle that will last long in the memory. Matthew Wade, the only man not named Steve to make a century for the tourists this summer, was still somehow under pressure for his spot, for the retention of his batting berth in the Pakistan home series coming up at the end of November. It was a contest between the man en vogue and the man on the way out.

Wade is a competitor, and he was determined to compete. He approached this summer in its entirety as the most aggressive player on both sides, in every sense of the word. 31% of his shots were boundary attempts, the most of any player, and a far higher percentage of his sentences seemed to be attempts on the egos of the English batsman. For all the crowing from Tim Paine that Australia were a reformed beast, Wade was evidence they were not. This is good, and fun, and fine.

Archer’s third spell of this innings was when things kicked up. For all the sledging from Justin Langer – the experienced Aussie trying to diminish the talent of the young Englishman, who’d have thought it – the final spell of Jofra Archer’s summer was sent down at an average of 142.37kph, his third fastest spell in Test cricket and his second longest. Test batsmen aren’t putting Jofra through a meat-grinder. It’s the other way around.

With all that pace behind him, Archer drew eight mistakes from Wade. Only eight, but because of the moments in which they occurred they’ll stand the test of time. Wade ducked, and hooked, and edged with the conviction of a man who’s been on tour for six months, but he survived. With it, so did the low but every-existent chance of Australia pulling off a victory to match the miracle of Headingley, a miracle to bring home the Ashes not by default, but with aplomb. 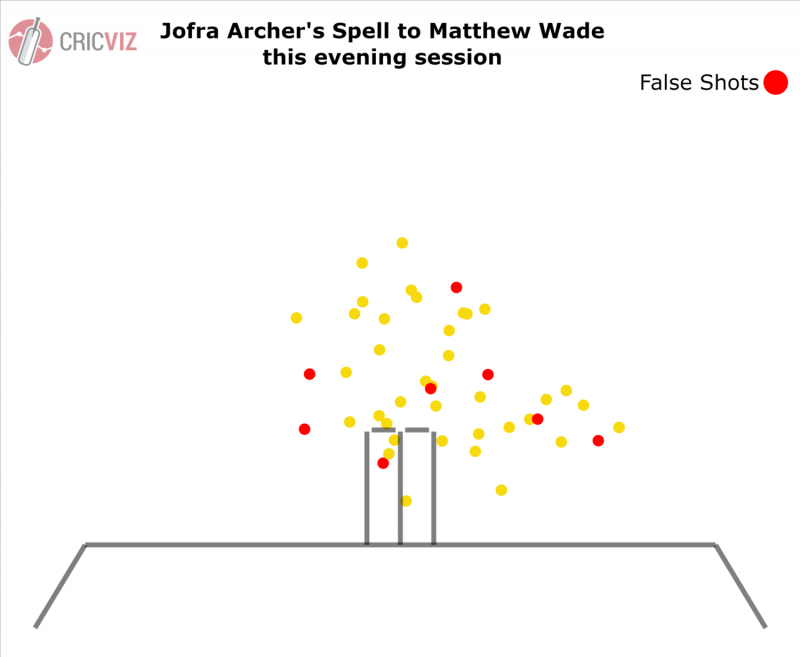 Archer ran in, bounced Wade, stared. Then again, then again. The stares were as subtle as the variations we’ve come to know from Archer, initially laced with humour then subsequently laced with menace, ever-harder to take in good faith. That’s the game, that’s Test cricket.

This was a counter-attacking innings where Wade was flying along the highway, recognising that with ever-increasing English nervousness, greatness was nearing. When Archer came on, he was rapidly trying to change down through the gears. Against Archer, he attacked just 24 per cent of the time, easily the least aggression he showed against any England bowler in South London over the last four days. In a very straightforward sense, when Archer was in the attack, this was a very different game. 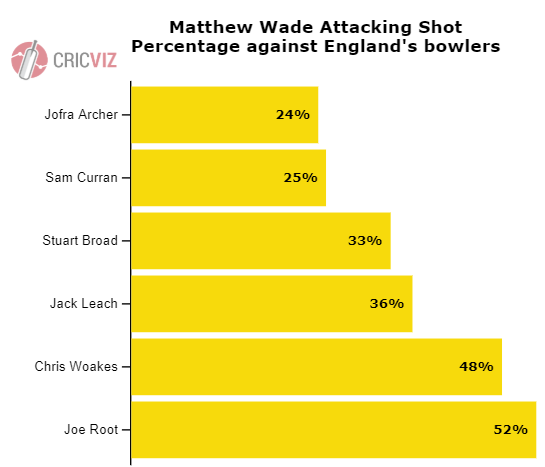 Wade had done wonderfully to get to that stage, as well. His approach to Jack Leach, a man whose reputation has grown alongside Wade’s this summer, was indicative of a man willing to try anything to get success. A naturally attacking batsman, Wade had been uncharacteristically cautious against Leach in the majority of the series. Possessed of quick feet, he was still reluctant to charge the English finger spinner, doing so only 6 per cent of the time in the first four Tests. In this Test, perhaps egged on by the situation, by the relative hopelessness of the match, he went all out. Forty-nine per cent of the deliveries Leach bowled in this Test were charged by Wade. In those quieter moments, taking risks against the most immediately unthreatening member of the English attack, Wade had earned the luck which returned against Archer.

And yet, with the proviso of context lurking in the background like a tiresome guest, it didn’t matter.

For some people, those happily awake in the late-year sunshine of British Summer Time, this battle didn’t matter quite as much as it could, because the Test was to all intents and purposes, won. Australia have only once chased more than these runs in their history, and with Smith back in the pavilion, today was not a day for fresh ink in the history books. Nerves aside, England were never losing this Test.

For others, fighting the calls for sleep or rising early, it didn’t matter because Wade still got his century. He still got to lift the bat, bookending his summer with tons of ultimately differing values. Since the start of 2012, only three Australians have made multiple centuries in an away Test series. Steve Smith (three times), David Warner (twice), and now Wade. He achieved something which only the elite of Australian batting has done in the last few years. His efforts will stand the test of time, and had Australia’s first innings performance been better, he may have been standing as a fourth innings match-winner to stand alongside Ben Stokes. Achievements don’t happen in a vacuum. He ends his series as the third-highest averaging Australian, following the two who’ll take all the acclaim. 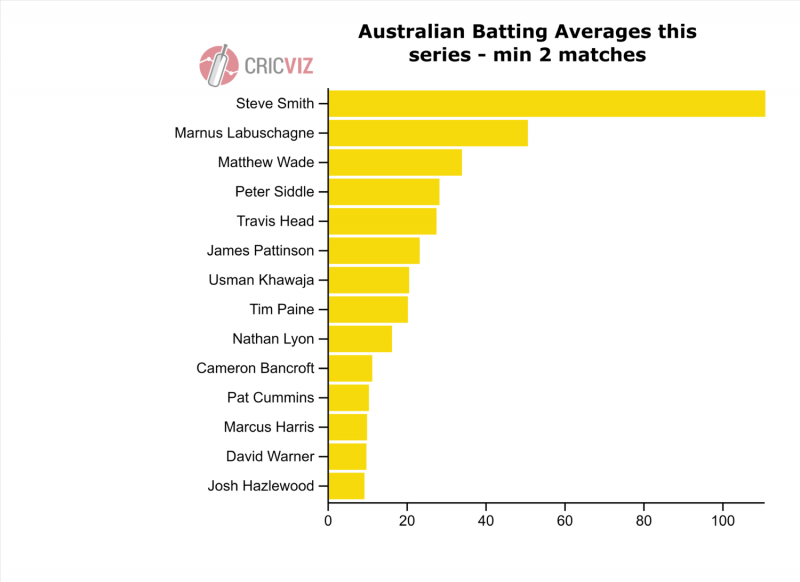 Ultimately, regardless of which hemisphere you’re in, it didn’t matter because England still won Test match. Their WinViz never sunk below 90 per cent after Warner’s wicket, and their seven-year-undefeated record in home series (minimum three Tests) still likely to be intact. Australia haven’t won, Australia haven’t lost. The series could, arguably, pass as nothing more than anomalous vessel for the greatness of Steve Smith, a trivia answer for decades to come.

Yet it won’t, of course. Because for all the calls for context, the desperation to place everything onto a ladder of clear narrative, of rises and falls and failures and redemption, sport always means something. To someone, somewhere. That’s the joy of it. We remember the moments of inconsequential fight as much as we remember solid, inarguable moments of contribution. Hence why this series result is peculiar. England fans can rest that, yes, they’re undefeated. Australia fans can be pleased that, yes, they have returned down under with the urn. Are either entirely happy? No. Are either entirely dejected? No.

The reason for that is that across this summer both have had moments to savour. Smith’s genius throughout, Stokes’ stunner, Stuart Broad’s consistent renaissance and the arrival of Marnus Labuschagne as a Test force. We’ll remember these moments as much as the results, as much as the context in which they took place. And long may it continue.