Last Saturday, with his team floundering at 45-8 in pursuit of a paltry total of 76, Moddershall & Oulton CC’s No. 11 batsman Dan Colclough might have been forgiven for feeling a little annoyed with the efforts of his team’s batsmen.

He probably figured he’d already done his bit with the ball, already chipped in towards an important North Staffs and South Cheshire League Premier Division derby victory over Stone CC, and that having to strap on his ‘mums and dads’ lay outside his job description.

Earlier that afternoon, Colclough’s canny, accurate, slow medium-pacers had returned the incredible figures of 17-12-11-9 – unsurprisingly, a personal best – which included the first nine wickets to fall, too, giving him a shot at breaking the NSSCL top-flight bowling record of 10-32. But there were only three balls remaining of his maximum allotment of 17 overs and he failed to remove the No. 11.

“I was just too pumped,” he said, “running in too fast, and weirdly started bowling yorkers”. Not his usual modus operandi, given that he falls some way below the pace threshold for reverse swing.

Colclough is a deluxe version of an English archetype: the highly skilled dobber, asphyxiating batsmen with wicket-keeper up and ring fields. Rarely getting much above 100kph – Wasim Jaffer, the former Indian Test opener and 2017 Moddershall & Oulton professional, reckoned he used to stand deeper at slip for Anil Kumble – he jags it both ways off the seam, sometimes alarmingly, while using subtle changes of angle and pace to work batters over and/or drive them to distraction: “Pressure, pressure, pressure, middle and off every ball, nothing to drive, lots of appealing”. He’s also never shy of a word or two for his adversaries, usually not particularly encouraging.

"I was actually bowling really badly at the start, struggling with running down the hill, shoving a lot of balls down leg"

To that end, he’s something of a chip off the old block, as father Steve was also a combative medium-pace seamer, the subtlety of whose bowling style stood in contrast to the bluntness of his observations about opposing batsmen, even if there was often some wit involved. Colclough Snr could also tell you his exact figures at any point in any spell, and even what his season’s average was as it was changing through the day. All very Rain Man. “I’m not as bad as him”, says Dan, “but I am very stats-driven. If I’m doing well, the team’s doing well”.

Despite having a few tricks of his trade passed down from the paterfamilias – although, he says the main developmental leap forward for someone of his bowling style was finally breaking free of the ECB’s age-related bowling restrictions – Colclough Jnr has something of a friendly rivalry with his father. Indeed, among the more pleasing aspects of last week’s dream spell was besting his Dad’s PB: “My previous best was 8-20 and Dad’s was 8-19, so 9-11 now puts that one to bed, thankfully”.

Waddling up to the wicket and dropping it on a handkerchief, Colclough may look a fairly innocuous proposition from the boundary, but he has a formidable record in league cricket. His breakthrough performance came as a 19-year-old in the final game of the 2008 season, when he picked up a maiden 1st XI five-wicket bag for Little Stoke (ironically, against pre-merger Moddershall, very nearly denying them the title). 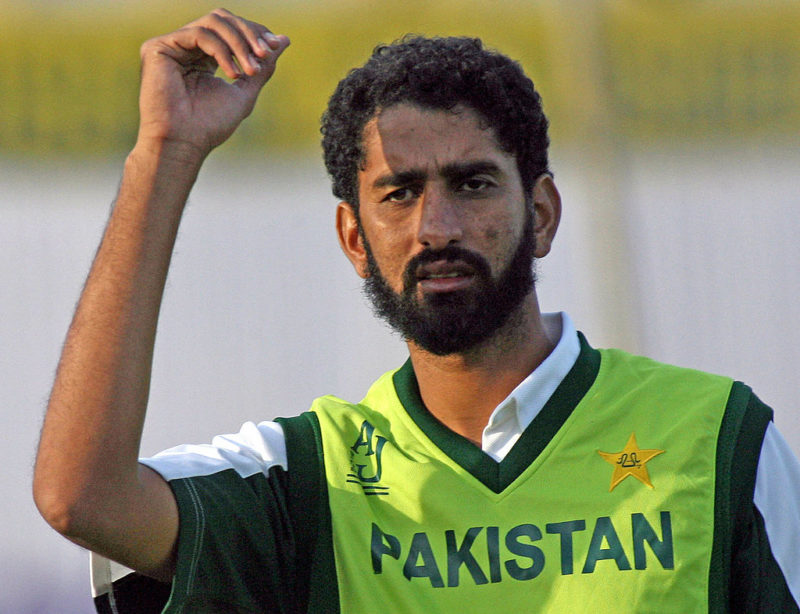 Shabbir Ahmed was a new-ball partner of Dan Colclough

Since then, he has finished as his team’s leading wicket-taker every single season – in 2010, eclipsing his new-ball partner Shabbir Ahmed, the joint-quickest Pakistani pace bowler to 50 Test wickets, as Little Stoke claimed the Premier League title – while his highest season economy rate in 10 full years of first-team cricket is a miserly 2.61.

He has bowled over 100 maidens every season except, paradoxically, that title campaign in 2010. In each of the last three seasons, the economy rate has been under two runs-per-over, all while picking up 200 league wickets at 9.5 apiece. Only once since that first full season in 2009 has Colclough finished outside the top five wicket-takers in his division (in 2012, when he was seventh as Little Stoke were relegated) and if you exclude overseas players, it is 2nd, 2nd, 3rd, 4th, 1st, 1st, 3rd, 1st, 1st and 3rd.

However, this season is a first Premier League campaign since 2012 for Colclough. From 2013 to 2016 he played down the leagues as professional for Oulton, but a blocked promotion after winning Division Two in 2014 followed by a pair of forced relegations, all for failing to meet strict ECB criteria on the provision of junior cricket, obliged the club to seek out a merger in order to keep hold of their increasingly frustrated players. They duly joined forces with neighbours Moddershall and the new club was born in early 2017, gaining promotion to the Premier League at the second attempt and now looking to consolidate, with Colclough a key figure.

Despite all his personal success, Colclough has never been called up for Minor Counties honours with Staffordshire, the perception being, he feels, that he’s just too slow, particularly on three-day wickets. “I always have to achieve above and beyond quicker and more exciting bowlers to prove my worth”, he says.

In the absence of a numbers-based Moneyball-style selection for his county, Colclough continues to dominate in the NSSCL. Reflecting on his once-in-a-lifetime spell, however, he admits: “I was actually bowling really badly at the start, struggling with running down the hill, shoving a lot of balls down the legside. I had my Dad moaning his bag off, telling me I was s**t. Then I bowled their opener who was looking to hit me in the road, nicked a couple off, then bowled their best player and just got into a groove. It was the perfect wicket for me, taking big chunks out”.

Not unsurprisingly for someone who sets so much store by his economy rate, he continues: “I can actually remember all eleven runs I conceded. There was a single to mid-on when he was too deep. Then he came too close and a two was chipped over his head. So those runs should have been stopped. And a leading edge over extra-cover that went for three should have been kept to two. So to be honest, it could have been 9-7!”

They say it’s never good to feel too pleased with a day’s work, too self-congratulatory, even if that day’s work is 17-12-11-9. Oh, and in the end he wasn’t required to bat after Moddershall and Oulton crawled over the line, eight down. All in all, a good day at the office.