Sri Lanka battled hard on day two of the second Test against England to build a first-innings lead of 46 over the visitors in what is turning out to be an evenly poised match.

It seemed that every little England breakthrough was followed by a Sri Lankan resurgence, as they refused to fall prey to a batting collapse and hand England a golden opportunity for their first series win in Asia since 2012.

Nightwatchman Malinda Pushpakumara fell to Moeen Ali but Dimuth Karunaratne and Dhananjaya de Silva battled through the majority of the morning session as England’s spinners toiled in search of a breakthrough.

With spin dominant in the match and series, Ben Stokes was not given much of a look-in with the ball by his captain, but he couldn’t be prevented from having an impact on the game. 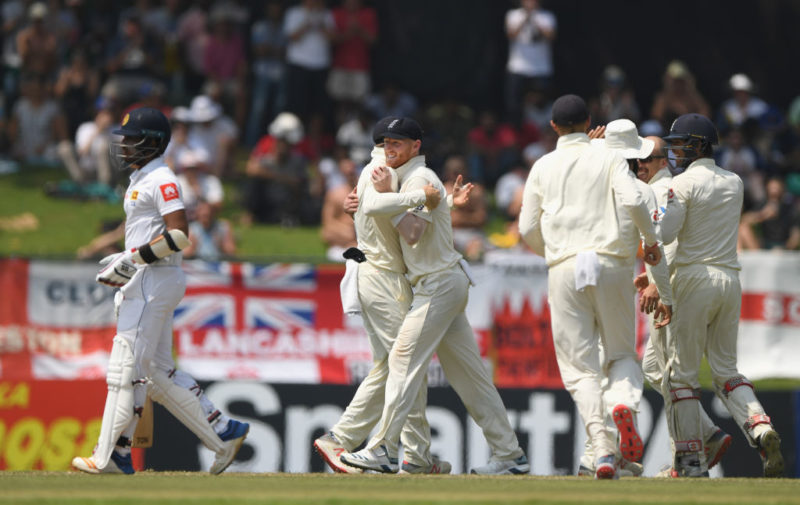 Ben Stokes was outstanding in the field

First there was the crucial run-out of Karunaratne, as he ran in from gully and took the stumps down with just one stump in his line of vision. That wasn’t enough to satisfy his appetite, as he took a staggering reflex catch with his left hand off the bowling of Jack Leach to have Kusal Mendis dismissed as the lunch break approached.

Adil Rashid was mercurial, often struggling to find the right length. However, when he did get it right, it was majestic to watch from England’s premium wrist-spinner. Some ripping and ragging turn accounted for the outside edges of both de Silva and Angelo Mathews. Ben Foakes has taken to Test cricket like a duck to water, and obliged by snaffling both chances. 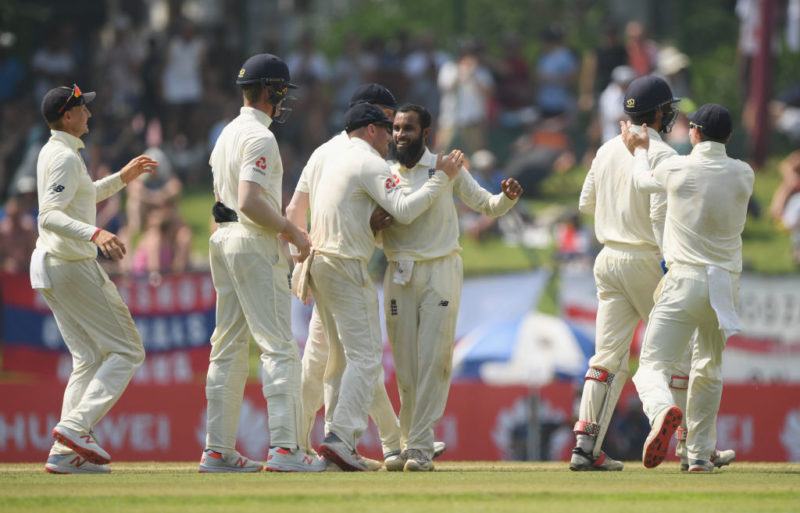 Rashid celebrates with his team-mates after having Mathews dismissed

At 165-6, England would have been positive of building a first-innings lead, but Roshen Silva had other ideas. On his return to the side, Silva played a patient and responsible innings, supported ably by Sri Lanka’s tail-enders.

Akila Dananjaya was particularly impressive, striking 31 from 39 balls, while Dilruwan Perera and Suranga Lakmal also held their own in helping their side take what may be a crucial first-innings lead of 46. England’s frustrations were clear to see in the field as the third session progressed, with Jos Buttler dropping a very difficult chance at cover from Dananjaya, and Rory Burns missing an equally tough run-out chance.

Roshen eventually perished looking to strike some lusty blows at the end of the day, picking out Moeen at mid-on to finish with 85 from 174 deliveries.

Enough time was left for England’s openers to walk out and face the music. It wasn’t Keaton Jennings accompanying Burns however, with Leach sent out as nightwatchman to faces six testing deliveries from the off-spinner Perera. Leach finished a strong day for himself personally, defending his wicket to follow figures of 3-70 during the Sri Lanka innings.

A crucial day waits for England’s batsmen as they will look to remove the current deficit and set Sri Lanka a testing target.