England all-rounder Ben Stokes, who was caught on camera abusing a spectator after his dismissal on day one of the fourth Test against South Africa at The Wanderers, issued an apology on Twitter for losing his cool.

Stokes was shown on television directing a slew of expletives toward a spectator in the crowd as he walked back to the dressing room after being dismissed by Anrich Nortje for 2.

Soon after the incident, Sky Sports apologised to the viewers about Stokes’ outburst.

Stokes admitted his mistake in a Twitter post and stated that his extreme reaction was unprofessional on his part. “I wish to apologise for my language that was heard on the live broadcast today for my dismissal,” he wrote. “I shouldn’t have reacted in that way.”

The 28-year-old explained his reaction, stating he was subjected to “repeated abuse from the crowd.”

Related Story: ‘Just get on with it’ – Paine hits out at Stokes for hypocrisy over sledging 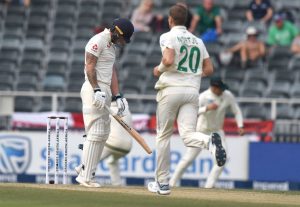 “It is disappointing that a member of the public has gone out of their way to abuse Ben as he was leaving the field. Ben is fully aware he should not have reacted in the way that he did and apologises for his actions,” Ashley Giles, the England managing director of cricket said at the close of play.

“In addition to this incident, members of our support staff were subjected to personal abuse during and after the day’s play. We have requested to the venue to ensure security and stewarding are enhanced for the remainder of the match so players and staff members can go about their duties without provocation.”

England are currently leading the four-match Test series 2-1. The fourth Test will be followed by three ODIs and as many T20Is.