South Africa captain Faf du Plessis admitted he made the wrong decision to put Bangladesh into bat as his side suffered their second World Cup defeat in a row and watched on as Bangladesh recorded a record partnership.

The Proteas, ranked as the third best ODI team in the world, were dealt an early blow when young paceman Lungi Ngidi had to leave the field after seven overs with a hamstring injury. He did not bowl again and it is unsure whether he will feature in the remainder of the tournament.

After a solid start from the openers, half-centuries from Mushiqur Rahim (78) and Shakib Al-Hasan (75), along with late hitting from Mahmudullah (46*) and Mosaddek Hossain (26), guided Bangladesh to an excellent 330-6. The 142-run partnership between Shakib and Mushiqur was the highest for any wicket by a Bangladeshi pair in a World Cup match.

RESULT: Bangladesh seal a famous win! An excellent all-round display beats South Africa by 21 runs. The Proteas now have it all to do to reach the semi-finals. Scoreboard. 👇 #CWC19 #SAvBANhttps://t.co/2x9iJoIG1u pic.twitter.com/eLu1W2bNAD

Chasing a big total, South Africa looked well set on 202-3, thanks to 62 from Du Plessis and contributions from Aiden Markram (45), Rassie van der Dussen (41) and David Miller (38). However, Bangladesh bowled with discipline and three wickets from Mustafizur Rahman, along with a tight spell from Mehidy Hasan, squeezed out any hopes of a Proteas victory.

It was a famous victory for Bangladesh, but for South Africa, two consecutive defeats mean they need to beat India in their next match to stand any realistic chance of qualifying for the semi-finals. Du Plessis was left frustrated by his side’s display and questioned his own decision to bowl first.

“Today didn’t according to plan,” said the 34-year-old. ” It wasn’t ideal with Lungi getting injured, but 330 was out of par. Not a great performance from us. Looking back, no. I wouldn’t have bowled first, but the thinking was, the surface was going to have more pace and bounce. If a subcontinent side gets runs on the board, they could squeeze it later. 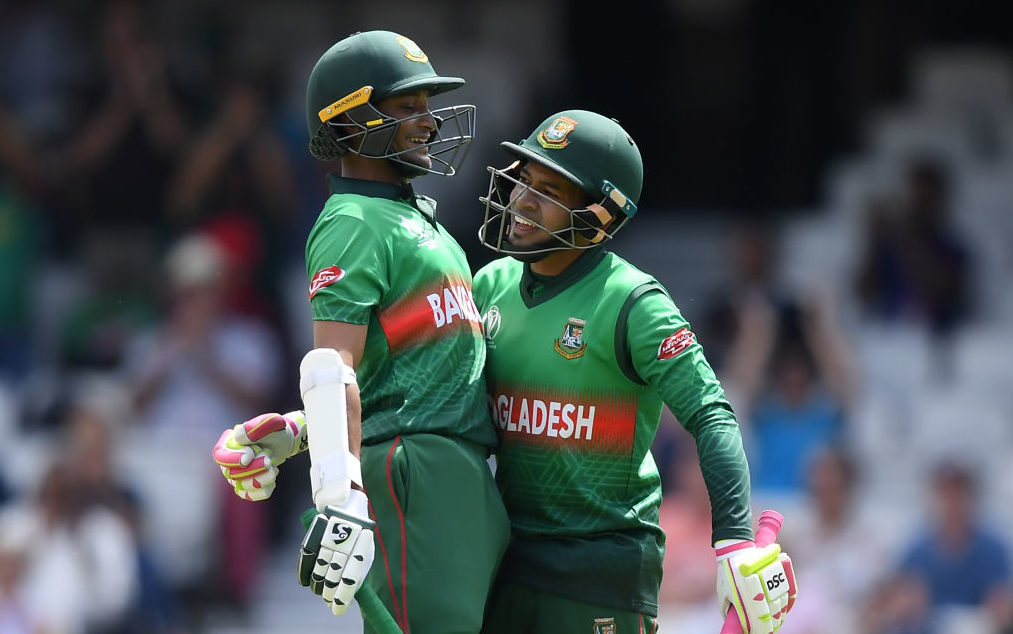 Shakib and Mushfiqur batted superbly in the middle overs

“Even with Lungi’s injury – he’s our death bowler with KG – to go for 54 off the last four was damaging. We came here with a fast-bowling attack we wanted to have. [We’re] not quite sure of Lungi’s hamstring injury – it can be a few days or weeks off. Dale Steyn is bowling in the middle now, hopefully there’s some progress. It won’t get easier from here, South Africa is a proud sporting nation. Skills weren’t there, but we’ll fight. We’re firing at 50-60 percent.”

Bangladesh all-rounder Shakib Al-Hasan, who took his 250th ODI wicket with the dismissal of Markram, feels his side have a lot give in this tournament.

“It will be one of our top wins, we’ve upset a few sides,” he said. “This is my fourth World Cup, and this is the tournament where we want to prove something. The start can’t get better than this. This is the start we needed, we had the belief as we came in to England. The dressing room will be happy but they know the job has just started. My two years with Worcestershire helped me a lot.”