Both England and Australia have produced some special limited-overs players down the years, but who makes our England-Australia Cricket World Cup legends XI?

Old enemies with vastly contrasting Cricket World Cup fortunes, Australia’s four World Cup wins rightly earns them the majority of the places in this XI. England still await that maiden World Cup victory but have had individuals who’ve provided special moments during the tournament, often in clashes with their historic rivals.

Find out who made our XI below. 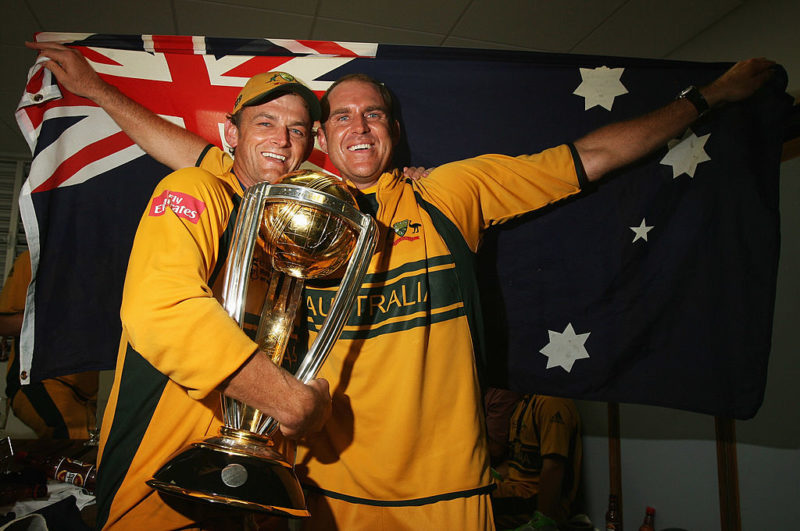 A source of brutal impetus at the top of Australia’s order, Gilchrist embodied pinch-hitting’s next evolutionary stage. The wicketkeeper was equally adept leveraging early fielding restrictions as he was clearing the boundary through the middle overs. His 149 against Sri Lanka in 2007 stands as both a shining example of the marriage of these skills and the highest score in a World Cup Final. 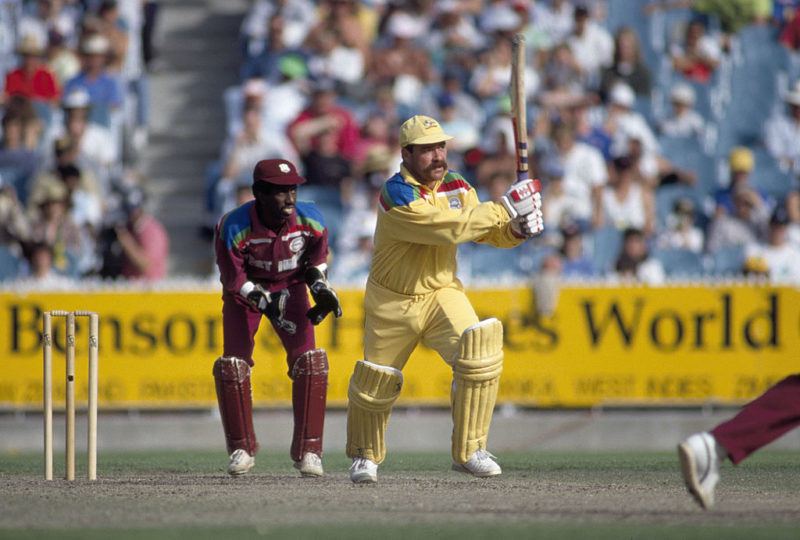 David Boon batting for Australia during his innings of 100 runs in the World Cup, 1992

The Tasmanian’s durable batting was a key component in Australia’s 1987 World Cup-winning side. Allan Border’s team were rank outsiders going into the semi-finals but Boon’s 65 against hosts Pakistan in Lahore set up a final showdown with bitter rivals England. The opener once again proved an anchor for Australia, hitting 75 out of a first innings score of 253. The win proved a turning point for Australia and signalled the start of a period of dominance that endured well into the 2000s. 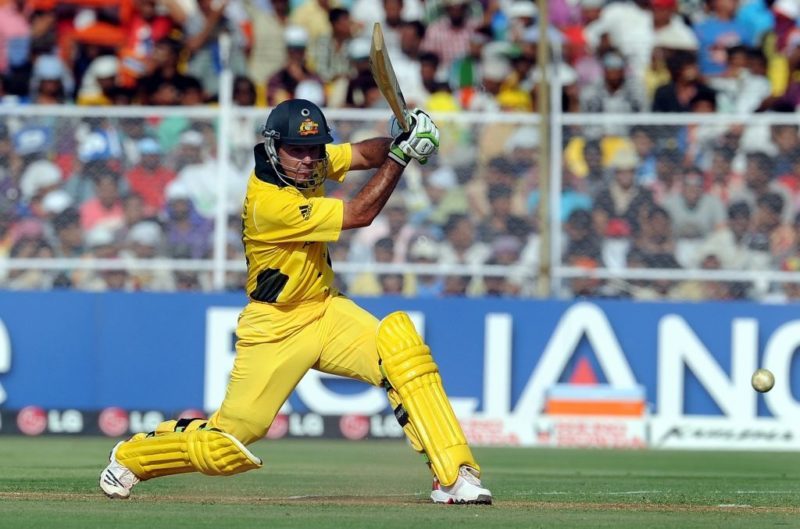 With a score of 140* in the 2003 final, the most outfield catches and the second highest tally of runs in the tournament’s history, when it comes to World Cup legends Ponting is in a class of his own. Unwearied by the passing of the years in 2011 a 37-year-old Punter hit 104 in his final World Cup innings against eventual winners India. 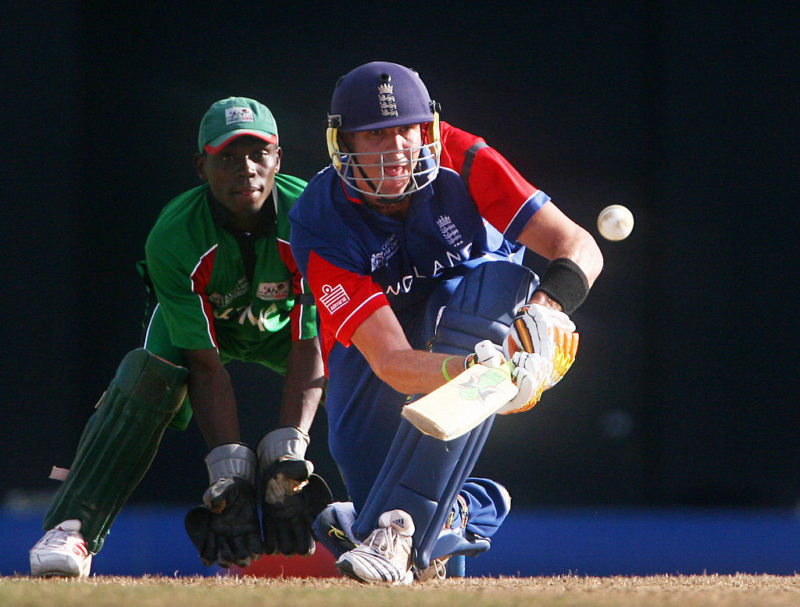 KP went into the 2007 World Cup as the number one ranked ODI batsman and proceeded to peel off 444 runs in nine innings at the tournament as England failed to make it out of the Super 8s. A score of 104 in a losing cause against Australia proved to be the highlight as Pietersen cemented his status as one of world cricket’s most promising talents. 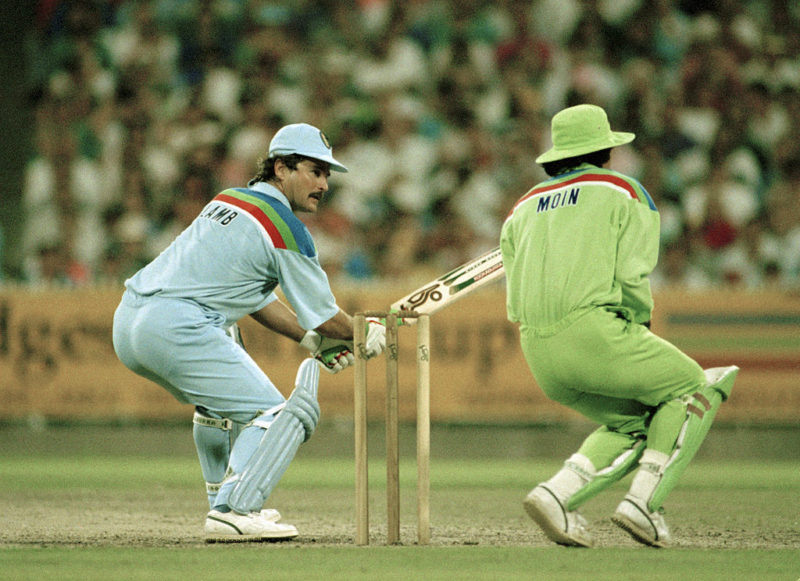 South Africa-born Lamb was a standout performer for England at World Cups through the 80s. His 102 off 105 balls on World Cup debut against New Zealand in 1983 started a trend of the all-action batsman turning in punchy performances at the tournament. Lamb also gave England hope in the 1987 final with a score of 45 before being clean bowled by Steve Waugh. 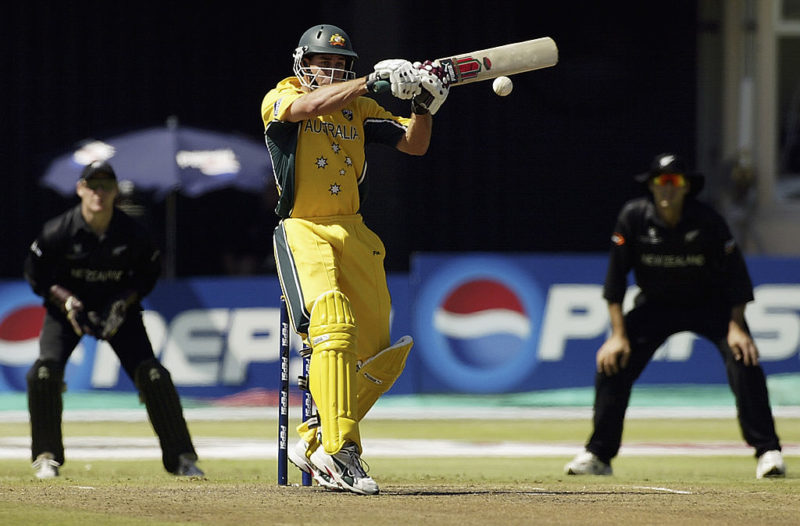 Michael Bevan of Australia hits out during the Cricket World Cup, 2003

Regarded as one of the finest finishers in ODI history, Bevan was at his best managing troublesome run chases. When Australia met England at the 2003 tournament Bevan’s sang-froid went to extraordinary levels as he guided Australia from 135-8 to England’s target of 204 with two balls to spare, hitting 74* in the process. 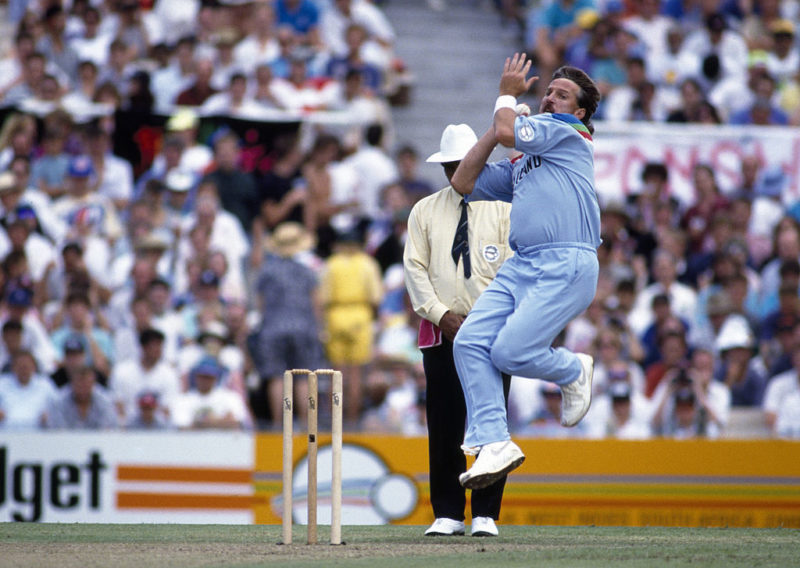 Ian Botham bowling for England during the Cricket World Cup , 1992

Botham seemingly always saved his best for the old enemy and World Cup cricket did not buck this trend. His 4-31 and 53 with the bat during an eight-wicket England win at the ’92 tournament represented a fitting coda to a career of iconic performances against the Australians. 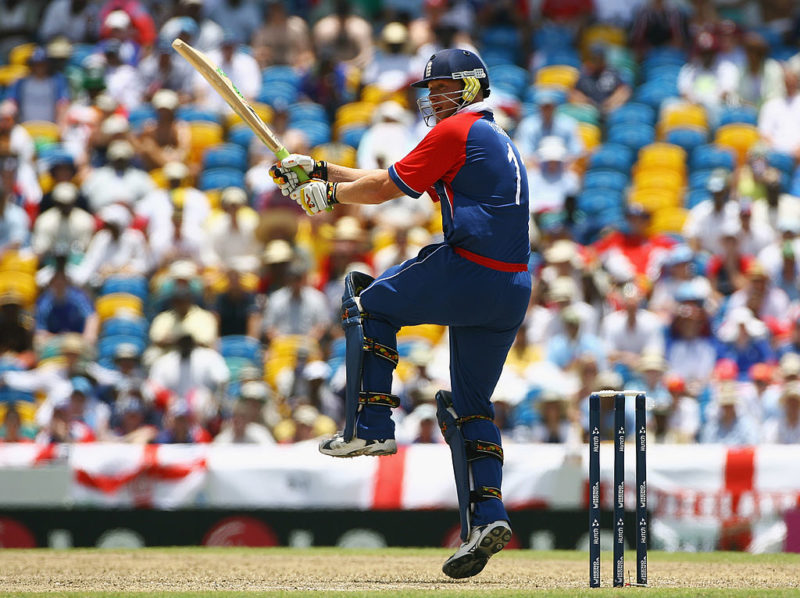 Gaining notoriety for drunkenly commandeering a pedalo into the Caribbean Sea at the 2007 tournament, Flintoff was an economical fast bowler in World Cup cricket. Freddie was at his best during the latter stages of England’s 2003 campaign where against India he took 2-25 from his ten overs, removing Virender Sehwag and Sachin Tendulkar, and was a lone hand hitting 64 as England failed to chase a score of 250. 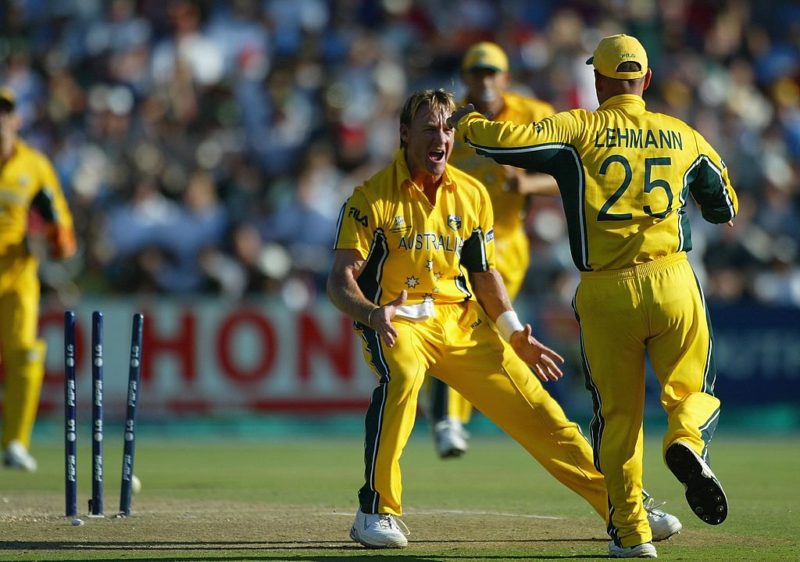 Andy Bichel of Australia celebrates during the Cricket World Cup, 2003

Bichel in the 2003 group game against England produced one of the greatest all-round performances in World Cup history. England had to beat Australia to stand any chance of qualifying for the Super Sixes and were cruising at 66-0 when Bichel entered the attack. The seamer then dismissed three of England’s top order, including bowling captain Nasser Hussain with a perfect out-swinger, in the space of eight balls on his way to figures of 7-20. Then batting at No.10 in partnership with Bevan, Bichel hit 34 not out as Australia snatched victory from the jaws of defeat. 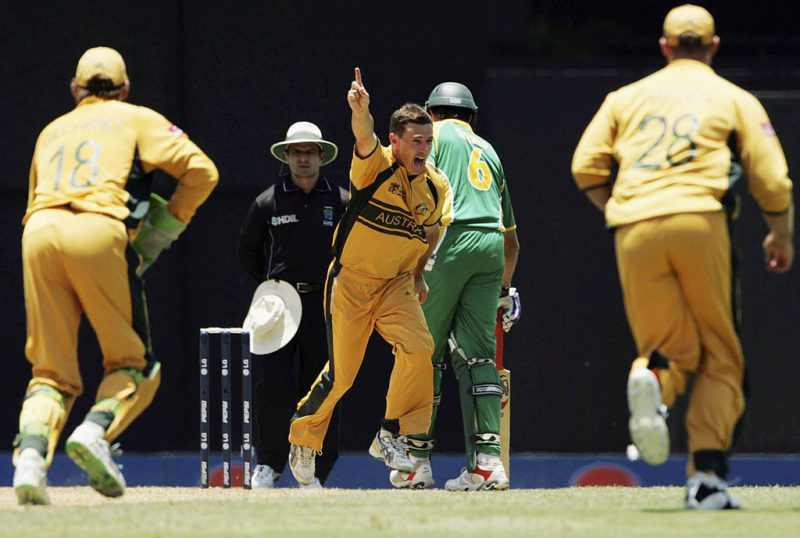 Shaun Pollock is caught and bowled by Brad Hogg during the Cricket World Cup, 2007

It may seem churlish including any spinner other than Shane Warne in this XI, but Hogg statistically has a valid claim. The left-arm wrist-spinner has more World Cup wickets than Warne at a better average and has won two tournaments to Warne’s one. With his bowling style a rarity, Hogg was an incisive weapon in the ’03 and ’07 campaigns. Figures of 4-29 in 2007 against New Zealand helped Australia to inflict what was at the time the largest loss by a Test nation at the World Cup. 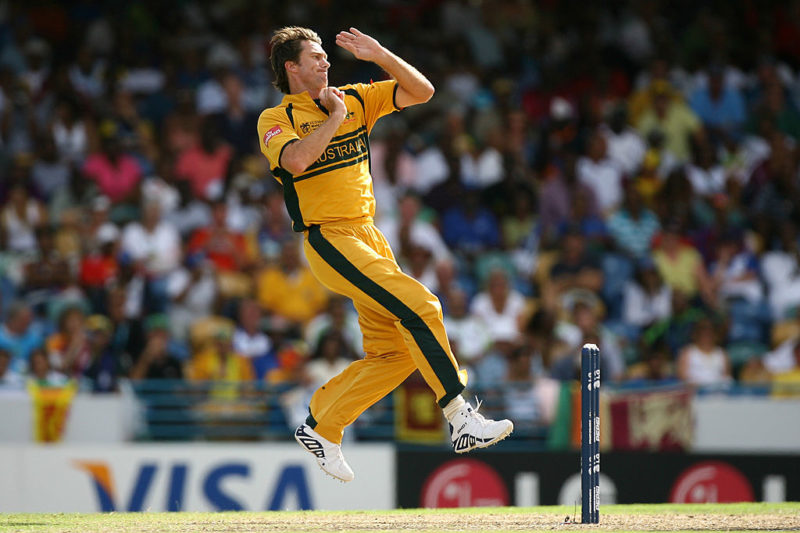 Glenn McGrath of Australia in action during the Cricket World Cup, 2007

McGrath retired from ODI cricket after the 2007 tournament with a wicket from his final delivery. A veteran of four tournaments, not once did Australia fail to make the final with the fast bowler in their side. A true legend of the tournament, in addition to being the leading wicket-taker in World Cup history McGrath also holds the record for the most wickets in a single tournament, best bowling figures and most maiden overs.