England’s wicketkeeper-batsman Jos Buttler could be primed for a makeshift captaincy role after injuries put regular captain Eoin Morgan, and Jason Roy, in doubt for the side’s next World Cup 2019 game, against Afghanistan.

“If it comes to captaining, then it’s a huge honour any time you do it, and from behind the stumps, you have a really good view of what is going on,” Buttler stated, ahead of the match on Tuesday, June 18.

“It’s down to you to manage and separate the two jobs. For the 10 seconds when you are a wicketkeeper, do that to the best of your ability, then outside of that, allow yourself to think about the game.”

Jason Roy will not field for the rest of this innings due to tightness in his left hamstring.

He will therefore not be able to bat until No.7 on the batting card.

Both Morgan and Roy did not bat during England’s win against West Indies. While Roy was hit by a hamstring problem, Morgan battled back spasms, and appeared to be in discomfort during the post-match press conference. Both are set to undergo scans, and a call on their participation will be taken closer to the game, after further assessment. 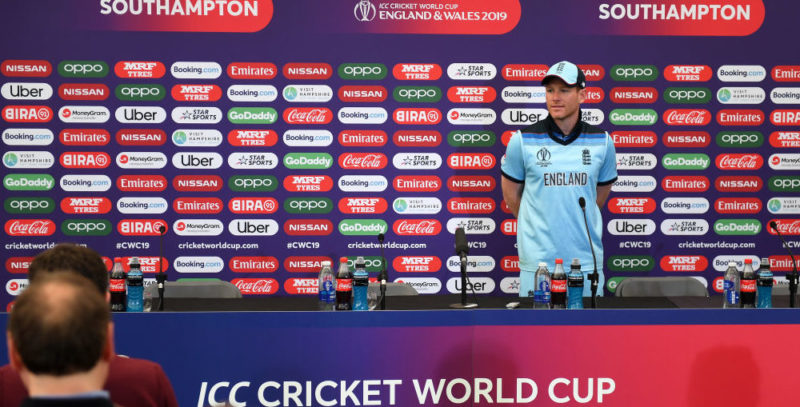 Hampered by back spasms, Eoin Morgan was forced to stand through the press-conference after the West Indies game

In ODIs, Buttler has led the team on six occasions, winning on four of them. Most recently, he took over the reins when Morgan was banned for an ODI, for slow over-rate, during the series against Pakistan in May.

Buttler admitted to having read Morgan’s captaincy from close quarters, as his deputy in the side, and will be banking on the experience gained from his discussions with his captain over the years.

“I would be chuffed, but I’d rather Eoin plays,” Buttler said. “I have played under Eoin for a long time and he’s a fantastic captain, and he’s someone I have tried to learn from as vice-captain. We speak a lot about the game, we’ve got similar views, so it will be very similar if it was me.”

Speaking about the side’s fast-bowling resources, Buttler praised the duo of Jofra Archer and Mark Wood, both of whom are playing their first World Cup. Archer leads the bowling charts for England in the tournament, with nine wickets, closely followed by Wood, who has snared seven scalps so far.

“Their extra pace generates opportunities,” Buttler said. “But you have to credit their skill level too, not just their pace. Pace without that can be an advantage to the batsmen, but they are very skilful.”