Mitchell Marsh has been drafted in as cover for the injured Marcus Stoinis, who is sidelined with a side strain he endured in Australia’s match against India, which has ruled him out of the upcoming clash against Pakistan.

Stoinis has played all three of Australia’s games so far and made important contributions with the ball, but his availability for the rest of the campaign is in doubt.

''There is that danger man, x-factor about someone like Mitchell Marsh with the way that he can strike the cricket ball''

Australia captain Aaron Finch remained unsure how long Stoinis will be ruled out for, with the all-rounder scheduled to undergo reassessment before Australia take on Sri Lanka on Saturday. “[We’re] not exactly sure on how many games he’ll miss,” said Finch. “That’s why Mitch is flying over. It’s still being assessed, over the next couple of days we’ll have a clearer picture on what that looks like.”

Stoinis has not been officially ruled out of the squad just yet, as International Cricket Council (ICC) regulations state that once a player has been replaced they cannot compete in any further stages of the competition. Therefore, Australia are monitoring his recovery before confirming Marsh a a permanent replacement.

Marsh is highly regarded by Australia’s assistant coach Ricky Ponting. “I feel for him. I would love to see him in the World Cup squad. There is that danger man, x-factor about someone like Mitchell Marsh with the way that he can strike the cricket ball and his bowling is a little bit underrated as well. They’re the guys that can win you a World Cup. 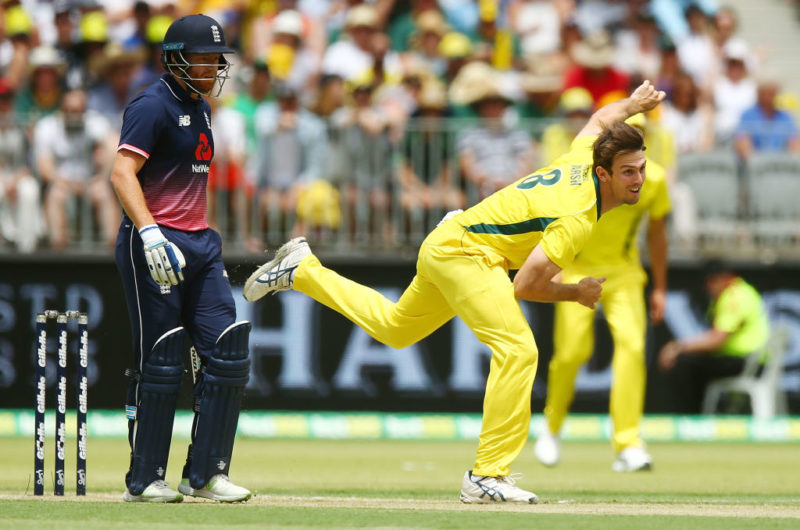 Mitchell Marsh bowls during during an ODI against England, January 28, 2018

Even though he hasn’t played an ODI in over a year, with his most recent outing coming in January 2018 when Australia took on rivals England in Perth, he offers experience and an all-round skillset. He has scored 1,428 ODI runs at 35.70, including one century.

Marsh was due to fly over to England on Friday regardless, as part of the Australia A side who are touring England to take on various counties across the country in both List A and first-class matches.