England captain Eoin Morgan attributed his team’s turnaround in the 2019 World Cup to not getting desperate when they were pushed into a corner.

England were under the pump after back-to-back defeats to Sri Lanka and Australia left them facing must-wins against India and New Zealand – two quality opponents they hadn’t beaten at the World Cup in 27 years.

But England rediscovered their old, belligerent one-day form to post tall scores against both teams and successfully defend them to make the semi-finals for the first time since 1992.

“I think we sort of knew that coming into the tournament, the difficult challenge in applying that to World Cup games is that it is just a one-off game,” Morgan said after their 119-run win over New Zealand. “It lends itself more for you to be, whatever the way you play, it should be the extremity of that on the day because you don’t get another chance and it’s taken us time to get to grips with that.”

Is it coming home?🤔 England now just 2 wins away from the #CWC19 title. New Zealand stumbling towards the semi-finals. All that and more. Listen and subscribe on Podcast App/Spotify.https://t.co/hq5WVDPDh9

“We do stick to our mantra the whole time and not actually be cagey or desperate. It doesn’t work for us and it won’t win us the World Cup.”

In both of England’s two most recent wins, their opening duo of Jonny Bairstow and Jason Roy had a big part to play. England won the toss both times and, as has been the norm this tournament, opted to make first use of the surface.

Roy returned from a hamstring injury against India, which had kept him out of the defeats to Sri Lanka and Australia. In Roy’s absence, both Bairstow and England’s form dipped, but in his first game back, Roy and Bairstow strung together 160 for the first wicket, with the latter notching a century.

That trend continued against New Zealand, where Bairstow made his second successive ton and his partnership with Roy this time was worth 123. In both games, the duo’s aggressive run-scoring at the top ensured England had enough on the board before the pitch started slowing down from the middle overs.

“The manner in which they played is most important because we bat all the way down,” Morgan said. “We are not asking our guys to average 50 and strike it at 120, that is unrealistic. But pushing the ceiling as to what the guys would normally do was part of the process in which we have gone through probably the first two years of the four-year cycle.

“But looking at where the guys are at now, it is incredible, really, the talent they possess and what they can achieve on a consistent basis.”

As for New Zealand, they may still make the semi-finals in all likelihood, barring an improbable big win for Pakistan against Bangladesh. But they make the last four having lost their last three games, and Kane Williamson called for the need to play smarter cricket, especially on tough surfaces. 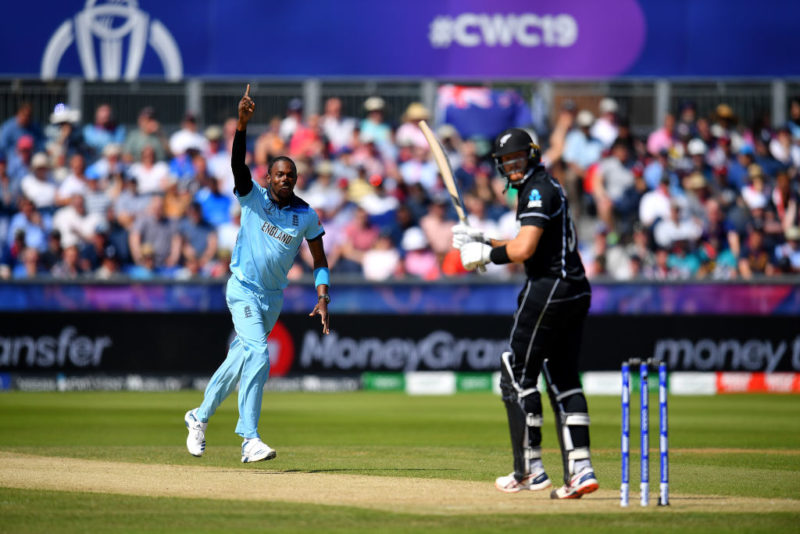 “Going into that second half, we just needed a couple of big partnerships, certainly from the top order and it wasn’t there,” he said after the loss to England. “And by no means was it an easy surface to try and gain momentum, but at the same time, it was important as a batting unit we were able to try and take the game to a position where you might give yourself a chance.

“We are thinking about our cricket and where we can improve and, without a doubt, it’s trying to take smarter options on some of these tougher surfaces. The experiences that we have had on some fairly tough surfaces are really important learnings and we can be better for having had that experience.”

Williamson praised Bairstow and Roy for putting the game beyond New Zealand early but acknowledged that being more aggressive with the ball could have helped stem the tide before the surface began to slow down.

“It [the pitch] probably changed about sort of the halfway stage of the England innings, but they played extremely well, and when they do have momentum, often it can be a big challenge regardless of the surface to stop. So they put us under a lot of pressure and hit through the line nicely.

“Taking early wickets against anybody that you come up against is the best way to stem momentum. Trying to be aggressive with the ball in hand to give yourself the opportunity to take those wickets is the best way to try and stop anybody from getting away from you.”

In the event that New Zealand do make the semi-final, Williamson said he wants the team to play with freedom. “If you are in a knockout stage where it’s the semi-final opportunity, certainly on the day anything can happen. And we know from our perspective that we haven’t put up our best performance yet and we know when we do that, it gives us the best chance of beating anybody.”

“If we are fortunate to be in a semi-final, then we do have a little bit of a break and we need the guys to have that freshness to go out and play with freedom.”