As his team continues to search for its first win in the 2019 Men’s Cricket World Cup, Afghanistan captain Gulbadin Naib has called on his players to focus on playing with the bat and ball, rather than on playing the names in the opposition.

Afghanistan have not only conceded both their games so far, against Australia and Sri Lanka, but have also been outplayed. Against Australia, they were bowled out for 207, and remarkably had 12 unused overs left in their innings. Their bowlers’ lack of incision then meant that Australia were able to run down the target in just under 35 overs.

Against Sri Lanka, in a rain-affected game, they bounced back well with the ball to rein the opposition in after a strong start and bowl them out for 201. But their batsmen couldn’t show similar fight and collapsed against Sri Lanka’s pacers to fold for 152.

Now, Afghanistan face another tough challenge, this time in the form of New Zealand, and Naib turned his focus to firstly lasting, and then competing, for the entire 100 overs. “If you go with the names, maybe it’s very difficult,” he said. “If you go with the ball or the bat, maybe it’s very easy. My plan for the boys is, don’t look for the names, just play your cricket, just play the ball. If you survive 10 or 15 overs, maybe it’s totally different.

“If you look at the last game against Sri Lanka, we missed a lot of things at the start of the match and also starting our innings on the batting side,” he continued. “We just need a good start if you bowl or if you bat, so we keep the momentum for 10 overs at the start. If we do this, maybe it’s easier for us.”

Related Story: How New Zealand fell back on ‘traditional values’ to clinch a hat-trick of wins – Almanack

That task, however, has been made exponentially harder, with Mohammad Shahzad, their opening batsman, having been ruled out of the tournament with a knee injury. Shahzad not only adds ample firepower to the Afghanistan top-order, but also brings value beyond the field, to the dressing room, where his chirpiness goes a long way in uplifting the mood.

“It’s a big loss for our side,” Naib said. “Shahzad is a great player for Afghanistan, very energetic. In the dressing room, he’s very funny, he entertains the team. We will miss a lot of things. I’m really upset, but it’s cricket.”

Shahzad’s absence puts the onus on the other senior members of the side, such as the spin tandem of Rashid Khan and Mohammad Nabi, to step up their game and deliver more consistently. 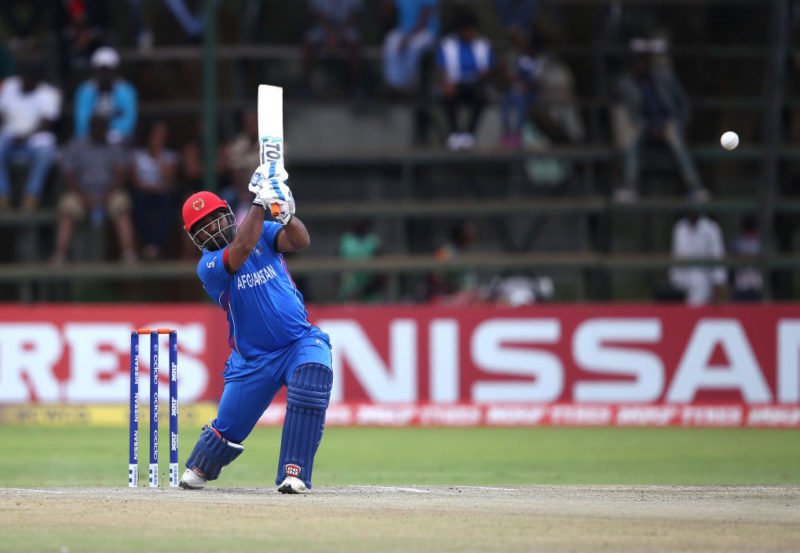 It starts off against a New Zealand side that is ripe for the picking. In their last match, against Bangladesh, New Zealand lost six of their eight wickets to spin, before scraping through in a chase of 245.

They will once again face a tough challenge against Afghanistan, a side renowned for its spin trio of Rashid, Nabi and Mujeeb Ur Rahman, but Gary Stead, the coach, assured that the performance against Bangladesh was a one-off.

“Sometimes, it gets tight like that that you can panic, but there was enough calmness still shining there at the end,” he said. “And I hope the lesson that we can take from it is we took some poor options at times. Bangladesh put us under a lot of pressure. They’re a really improved cricket team and played with the attitude of ‘there’s nothing to lose here’.

“It’s hard to put too much focus on it, because out of the 45 overs we faced, 30 is with spin. A lot more [wickets] will [fall to] spin anyway. We expect that when we face some of these Asian sides, in particular.

“We’ve played spin well in the past. Maybe the pressure of the moment a wee bit the other night made for some poor decisions. But we’ve certainly done the homework on the likes of Rashid [Khan] and Mujeeb [Ur Rahman] and [Mohammad] Nabi, who are definitely going to be a force for Afghanistan.”

Stead confirmed that Henry Nicholls, who missed the first two matches with a hamstring injury, is in contention to return at Taunton. However, fast bowler Tim Southee, who tweaked his calf, is yet to completely recover, but is expected to be fit for the clash against India on Thursday next week.

“Tim’s not far away now,” Stead said. “We’re really hopeful. The way he’s progressing, he should be right [for India]. I’m sure he’s going to be putting the pressure on us to be selecting him as well.”