Sri Lanka captain Dimuth Karunaratne has admitted that his side’s batting hasn’t fired and that the middle order needs to handle pressure situations much better, as they prepare to face West Indies on Monday in the Cricket World Cup.

A damaging nine-wicket defeat to South Africa at Chester-le-Street had left Sri Lanka’s semi-final chances out of their own hands until England’s win over India at Edgbaston knocked them out of the tournament. Consistently poor batting displays, in particular, have proven costly throughout the tournament, with Sri Lanka failing to post a score of 250-plus. Karunaratne pointed towards the middle order’s lack of form as a key reason behind such problems.

"If you don't have runs behind you, there's always a doubt in your mind as to whether you're going to get out when you go for a big shot."

“Our middle order hasn’t scored a lot of runs, and they don’t have that confidence,” he said. “If you don’t have runs behind you, there’s always a doubt in your mind as to whether you’re going to get out when you go for a big shot. It’s important to get settled before you go for those shots. What South Africa did in the last game was keep those fielders up. When we tried to hit out, it didn’t work – we lost wickets in a row.

“We have to know how to handle those situations and how to escape from those traps. I haven’t told everyone that same advice, but we are trying to work with some players on getting out of situations like that. In a big tournament like this, when you have a must-win match on the line, maybe it’s better to have a more positive mindset.”

There have been flashes of promise from the top order, such as Karunaratne himself, Kusal Perera earlier in the tournament and Avishka Fernando more recently. However, the captain knows that his side have to put bigger totals on the board to give their bowlers more of a chance. 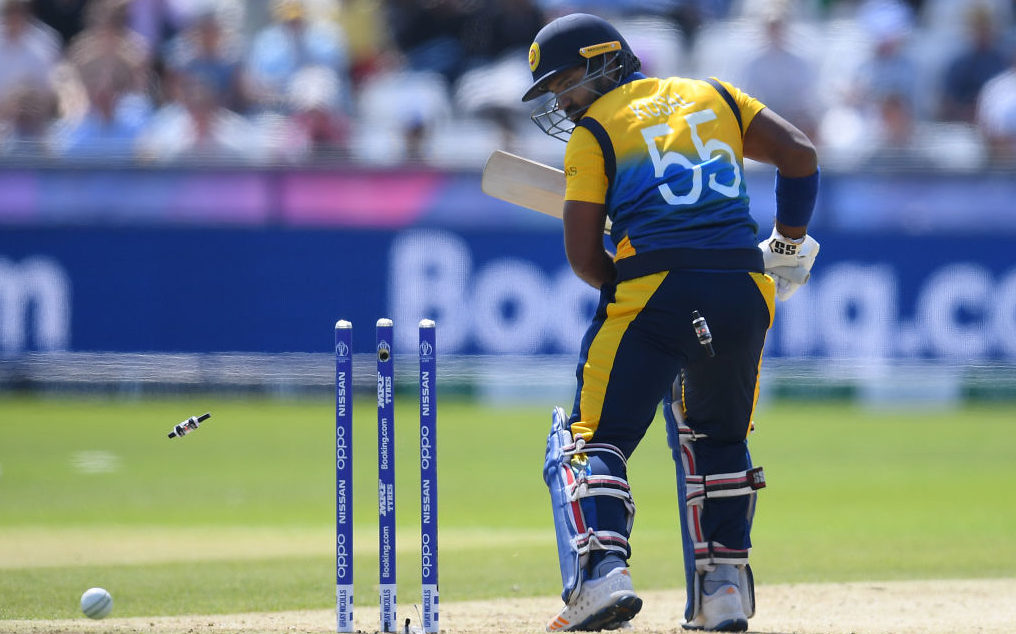 “We know that we weren’t able to make a score in excess of 250 – that’s the biggest factor in our team performance so far in the tournament,” Karunaratne said. “If two or three batsmen get set, then we can definitely get to 250. It’s very difficult when you only make 200, 220 to tell the bowlers to then take the opposition wickets. We need to take responsibility as a batting unit and make a big score.”

Had Sri Lanka beat South Africa, they could have reached a maximum of 12 points but are instead now going home, despite a stunning win over England at Headingley. Karunaratne knows that his side are capable of much more.

“We’re not a side who should be in this position,” continued the 31-year-old. “We have talent and skill to compete with anyone. But we only performed in certain games. It’s our bowlers who mainly performed. Our batting line up hasn’t fired altogether yet.”