A Mayank Agarwal double century, a four-wicket haul, but mostly, a lot of runs – plenty happened on the second day of the Indore Test between India and Bangladesh. Manoj Narayan picks out the six deliveries that best tell the story of the day. 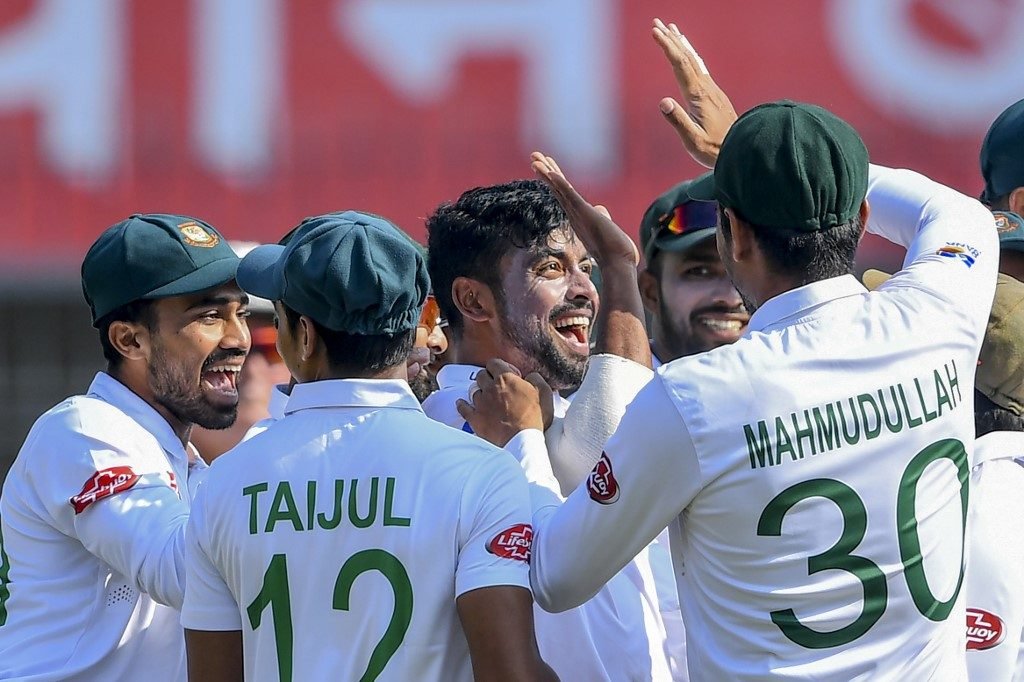 Nobody saw this coming. Abu Jayed had looked Bangladesh’s best bowler, keeping it tight, occasionally surprising batsmen with his inswing. And yes, he did snare Cheteshwar Pujara, prompting an uncharacteristic outlandish drive from him to have him caught at fourth slip. But when Pujara’s wicket fell, there were cheers across the Holkar Stadium in Indore rather than concerned Indian faces. It meant Virat Kohli would be walking out to bat.

The silence that engulfed the venue two overs later was striking, borne as it was from disbelief. The second delivery Kohli faced pitched outside off, but jagged in sharply, ramming into his pads. The umpire turned down exuberant Bangladeshi appeals. Mushfiqur Rahim was heard saying he wasn’t sure of the impact.

But Mominul Haque, the Bangladesh captain, reviewed anyway. He wouldn’t make a better decision all day – replays showed it was plumb, and Kohli had been dismissed for a rare duck. At the time, Bangladesh believed.

Agarwal makes his own luck

46.4, Mayank Agarwal, out b Mehidy, overturned

A massive slice of luck went Agarwal’s way late on the first day, when he was dropped by Imrul Kayes at slip – it was a straightforward chance, but Kayes fluffed it. How he must regret that. Be that as it may, Agarwal nearly found himself in a pickle late in the first session on Friday as well, contorting himself into a tricky position against Mehidy Hasan Miraz.

Agarwal seemed have been caught in two minds – whether to play the conventional sweep or attempt a more audacious paddle. He ended up doing neither, and was hit on the top of his pad. The umpire, Marais Erasmus, raised his finger, and the Bangladeshis were ecstatic, but Agarwal decided to review.

Hawk-Eye suggested the ball was missing leg stump, and Agarwal survived. He wouldn’t look back all day. 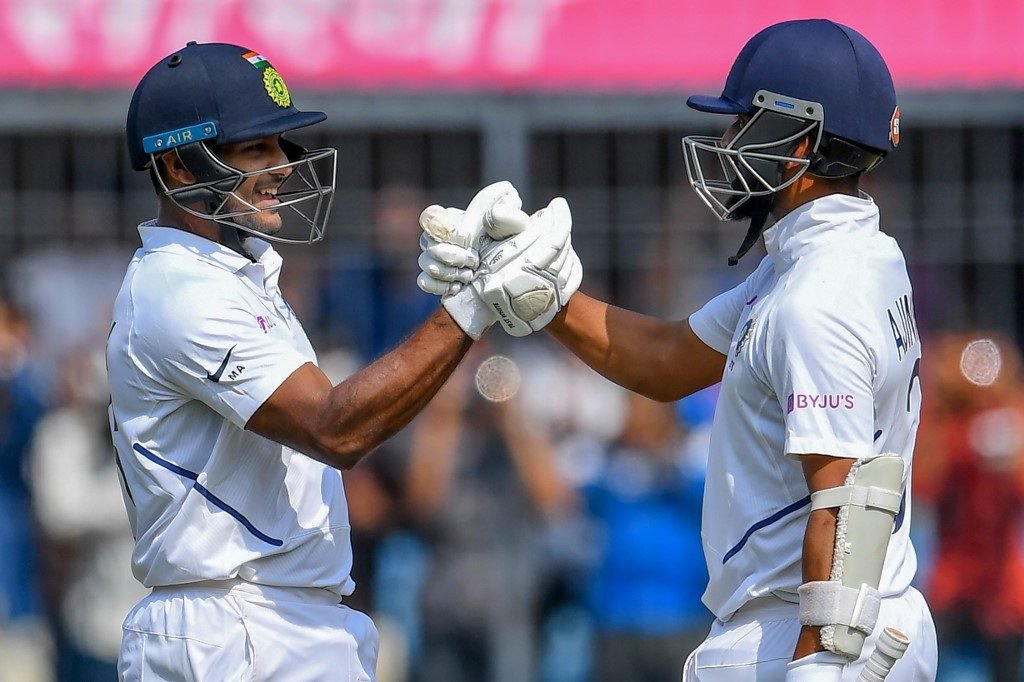 There are few things as good to watch in Indian cricket as Rahane batting in full flow. The Mumbai batsman oozed confidence today as he walked out there with intent – much like Pujara earlier – and went about taking on the bowlers whenever he got the chance. There’s something about Rahane’s signature flick, though, that is particularly pleasing – this was an innocuous ball, and there to be hit, but Rahane’s execution was just beautiful. That, however, was the story for most of the day.

For a while there, after Rahane joined Agarwal, Bangladesh were so badly treated, they seemed to run out of ideas. They did try bringing the spinners on and attempting to tempt the batsmen into drives, the hope being they’d mishit one and present a chance. Unfortunately for Bangladesh, that wasn’t the case today, and they soon had to revert to bowling what they considered safe lines, although the Indians attacked those as well.

Agarwal gets a message from Kohli

‘Hey Pep, how many times has Mayank Agarwal made a Test double hundred?’ #INDvBAN pic.twitter.com/Q0tsmf6MQp

By this point, Agarwal had reached his top gear. And it was devastation, as Agarwal kept coming down the track to the spinners, taking them inside-out over covers for six. He did that to both Islam and Mehidy, and having reached his century not too long back, he was already closing on 150.

With Rahane in full flow as well at this point, Bangladesh were in a proper leather hunt. India weren’t sated, though, and just how deep their hunger ran was clear when Agarwal muscled one past square leg for four, and reached 150. He raised his bat towards the dressing room to celebrate, and saw an animated Virat Kohli pointing two fingers at him – the message was clear. “Don’t come back here till you get a double century.”

Agarwal gave him a thumbs up. Message received: on we go.

Jayed the lone star for Bangladesh

.@imjadeja all smiles as he brings up his 14th Test FIFTY ??#INDvBAN pic.twitter.com/ipjnvnBCoz

Amid all Bangladesh’s struggles, one man stood out: Abu Jayed. He bowled tight lines and lengths, was unlucky to see catches dropped off him, and with the ball being thrown to him regularly – he was the only bowler that threatened – he broke his back trying to break through.

His fourth wicket – having already claimed the big scalps of Pujara and Kohli – came shortly after tea, and it was a much-needed one. He put one just outside off, just wide enough to tempt a flash. Rahane played something of a cross between the two shots, and unluckily for him, found the fielder at deep point.

It brought an end to a 190-run stand for the fourth wicket, but as dismayed as Rahane will be to fall 14 short of a century, it was a joyous knock.

Agarwal responds to Kohli with the bat 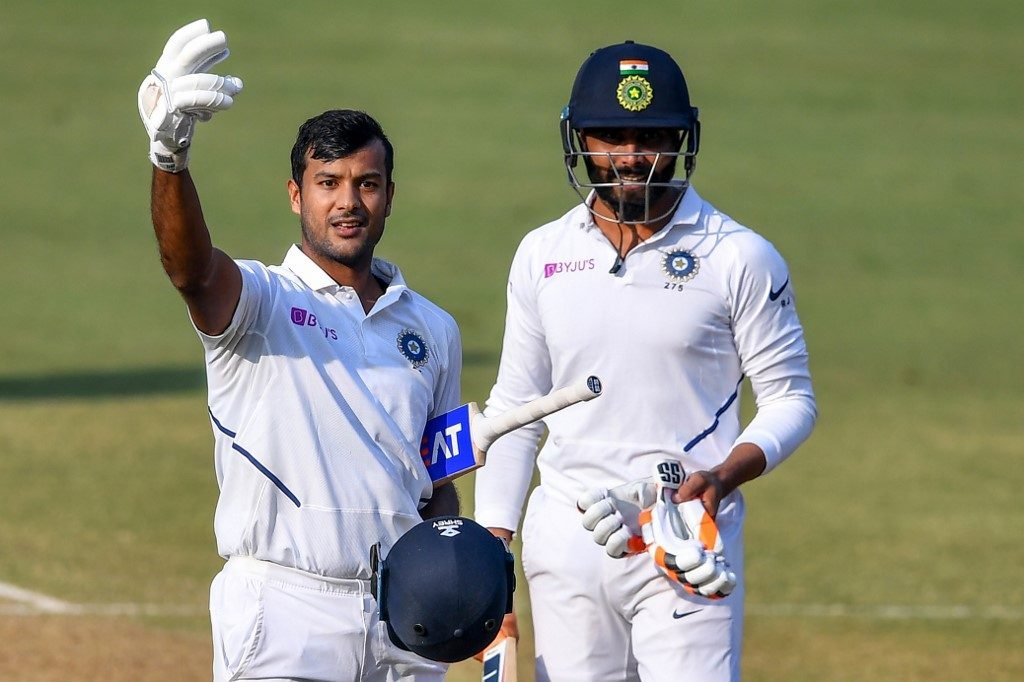 Perhaps the most encouraging thing about Agarwal is the complete absence of nerves in the 90s (or the 190s), which, for a guy playing just his eighth Test, is quite something. He treated this phase no differently to how he did the previous overs – the Bangladesh bowlers were subjected to big hits whenever they sent down a delivery that merited it.

His double century – his second in four Tests – was brought up with one such hit. It was on middle from Mehidy, and Agarwal danced down the tracks and tonked it over long-on. Off came the helmet, and there emerged a wide smile. He raised his hands and signalled two to the dressing room, towards his skipper. Kohli responded with his next message: three.

There was, unfortunately, no triple century. Agarwal holed out to Mehidy, who had some semblance of revenge having been ripped apart by the batsman all day. There was still time for a late burst from Umesh Yadav (25* off 10) and Ravindra Jadeja (60* off 76) as India posted 493-6 to end another day of pure and complete dominance.