India’s seamers made short work of Bangladesh with the pink ball in hand, as Ishant Sharma led the way with a five-wicket haul.

In response, India’s openers couldn’t convert their starts, but Virat Kohli and Cheteshwar Pujara applied their tried-and-tested ways to blunt the attack into submission. Aadya Sharma tells the tale.

India’s triumvirate of quicks walked in with their tails up after a fruitful first Test, but no one was sure how incisive they would be with a brand new pink ball in their grips.

Not long after Imrul Kayes was sent back, skipper Mominul Haque, hanging deep in the crease early in his stay, found himself wafting at a length ball from Umesh. It caught a thick edge and flew rapidly towards Virat Kohli at first slip. However, it was Rohit Sharma, standing next to him, who leapt to his right, horizontal in flight, and pouched a one-handed stunner.

It triggered a middle-order crumble; Mithun lost his timber to another vicious Umesh delivery, and soon after, Mushfiqur Rahim chopped onto the stumps.

Old-fashioned Test wicket-keeping is a rarely appreciated art nowadays, but Wriddhiman Saha is on a mission to make it sexy again. Forever on his toes and neatly compact in his technique, Saha was tested to the hilt against the pink ball’s late swerve and passed all tests with flying colours. 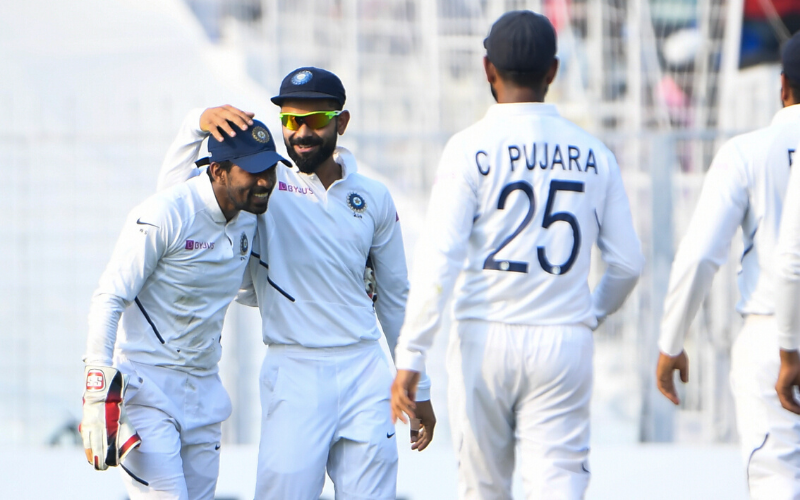 Saha was a livewire behind the stumps, admirably keeping against the swerving pink ball

Along the way, he presented several exhibits of his acrobatic skills, none more so than the spectacular grab of Mahmudullah. The batsman, pegged back in his crease by the pace attack’s accuracy, fished at a length ball on off stump, only to find an edge fly off his bat. The 35-year-old Saha dived full stretch, gliding his right arm along the grass as he completed the one-handed catch. In the end, he managed to cling on to the ball with just his thumb and forefinger, such was the stretch.

It was Ishant Sharma’s second wicket; he captured three more, completing his first five-wicket haul at home since 2007.

Shami works up some chin music

Having succeeded with a nagging stump-to-stump channel, Mohammed Shami branched out to target Bangladesh’s middle-order with a barrage of short-pitched deliveries. The result? Two concussion substitutes in a single day.

He first sent in a sharp bouncer to Liton Das, which whizzed past a woefully late pull stroke, and struck the emblem of his helmet. A shaken-up Das decided to continue after a physio check, bravely pulling the next one for four, but couldn’t go on for long, retiring hurt at the stroke of tea. Mehidy Hasan was bolted in as his replacement – not exactly like-for-like.

Another concussion substitute for Bangladesh – that makes it two on the same day.

Shami’s first delivery after the break was another thunderbolt, and it pinged right into Nayeem Hasan’s helmet. He continued the rest of his 28-ball innings despite more mid-pitch offerings. When India came out to bat, Nayeem stayed in, with Taijul Islam switching places with him for the rest of the game.

Coming on the back of a double century, Mayank Agarwal exuded confidence off the very first ball of the innings, clanking a four through deep point. It was a length ball swaying away, and Mayank rode the bounce to glide it past backward point.

It’s a stroke Mayank prefers hitting, staying deep in his crease and steering the ball late. Yet, with a flashy pink ball in play, and under the lights, it wasn’t exactly familiar territory. After lazily fishing at one and missing, Mayank tried to place another ball in the same region, but found more lift from Al-Amin Hossain’s gangly action, and ended up giving a low catch to gully.

Rohit Sharma has had a long-lasting love relationship with the Eden Gardens, a ground where he scored a Test ton on debut and the world-record ODI 264. Facing his first pink-ball over, he got off the mark by nonchalantly lofting a half-tracker to the deep square leg fence. 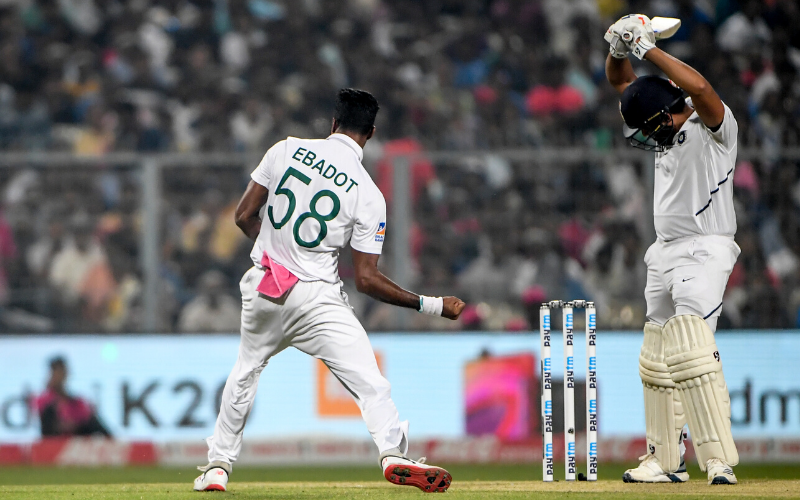 Rohit Sharma failed to utilise an early reprieve, dismissed while shouldering arms to an angling delivery

It seemed like it would be one of his days; on 12, he repeated the same stroke, this time to a sharply rising short-pitched delivery, but it flew straight off his bat to deep backward square leg, who fluffed a chance at the boundary. The fielder, Al-Amin Hossain, spilled what looked like a regulation catch, dropping the pink ball as he nervously fell on his knees.

Related Story: India, Bangladesh take the next step in their rivalry, with historic first

However, it was Ebadat Hossain who made up for his namesake’s gaffe. He angled one into Rohit, who shouldered arms, failing to gauge the incoming swerve. It rapped him on the pads, and the umpire ruled it in the fielding team’s favour, later re-affirmed by the third umpire, off a referred appeal.

Kohli: the man for all occasions

We’ve seen it with the white ball, we’ve seen it in red. Kolkata made us witness Kohli’s straight drive off a pink ball, and it felt astonishingly elegant.

It was a length delivery targeted on the stumps, and Kohli merely pushed half a step forward, elegantly creaming the ball down the ground. A textbook must have flashed in front of Ebadat’s face, as he looked back in appreciation of the stroke.

Kohli combined with the ever-reliable Pujara to build India’s innings, forging a 94-run stand that put India in the driver’s seat. And while Pujara perished just after his fifty, Kohli ended the day on 59*, also completing 5000 runs as Test skipper.