CricViz analyst Patrick Noone examines how, despite losing some of his pace, Tim Southee has found a way to remain relevant and successful in Test cricket, with the seamer displaying all his hard-won nous on the second day of England’s first Test against New Zealand at Mount Maunganui.

Tim Southee’s participation in this Test was not guaranteed in the build-up to the game. Lockie Ferguson and Matt Henry were both vying for selection, but the Black Caps opted for the experience of their senior new ball bowler. After leading the New Zealand attack for the best part of a decade, there was the sense that the right-armer’s powers were on the wane having lost his place in the ODI team and delivering modest returns in some of his recent Test outings.

Southee is bowling a fraction slower than he has been in recent years, with his average speed in 2019 down at 131.84kph after hovering around 133-134kph for every year between 2011 and 2018. But Southee’s threat has never solely been about pace; movement both through the air and off the pitch has been his lifeblood across all formats. That, coupled with the canniness to outwit batsmen with subtle variations, has made Southee one of the most potent quicks of this era.

His average speed in England’s innings was just 129.44kph, the slowest he’s been in a home Test since 2010, but Southee found 1.3 degrees of swing, the second most he’s found in a home Test since 2009. He was a threat on day one, drawing a false shot with 10 per cent of the balls he bowled, and was economical without picking up more than the solitary wicket of Joe Denly. On day two, his false shot percentage rose only slightly to 11 per cent and he was much more expensive, but that translated into three wickets that ripped out England’s middle order just as they were looking well set to post a formidable score.

Southee made up for his relative lack of pace by varying his position on the crease. On day one, he broadly stuck to two distinct groupings when bowling over the wicket – either close to the stumps or slightly wider – as he focussed on regularly hitting a good line and length. On day two he made a subtle change, adding more variety by spreading his release points across a much larger area, rather than sticking to the two groupings he had preferred on day one. This kept the England batsmen guessing as Southee traded accuracy and ‘bowling dry’ for more threatening wicket-taking deliveries. 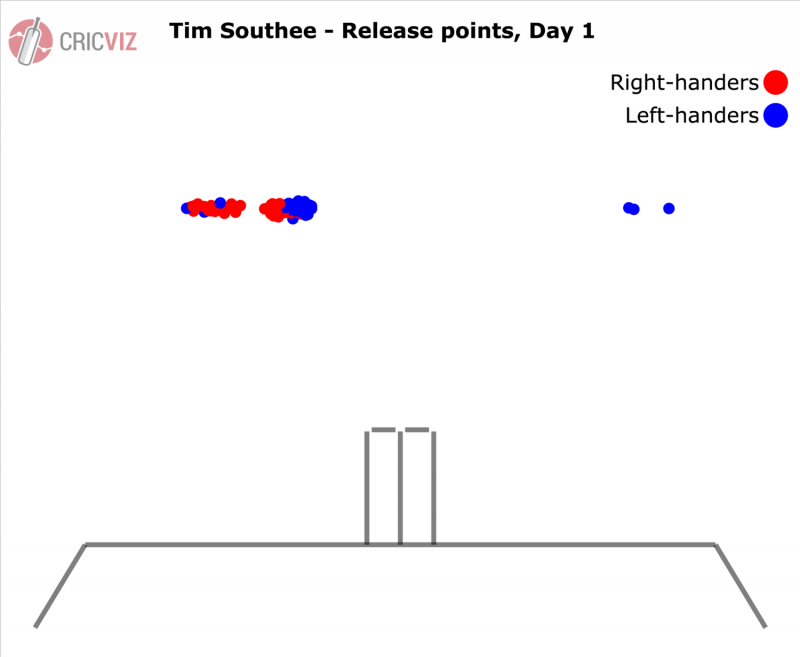 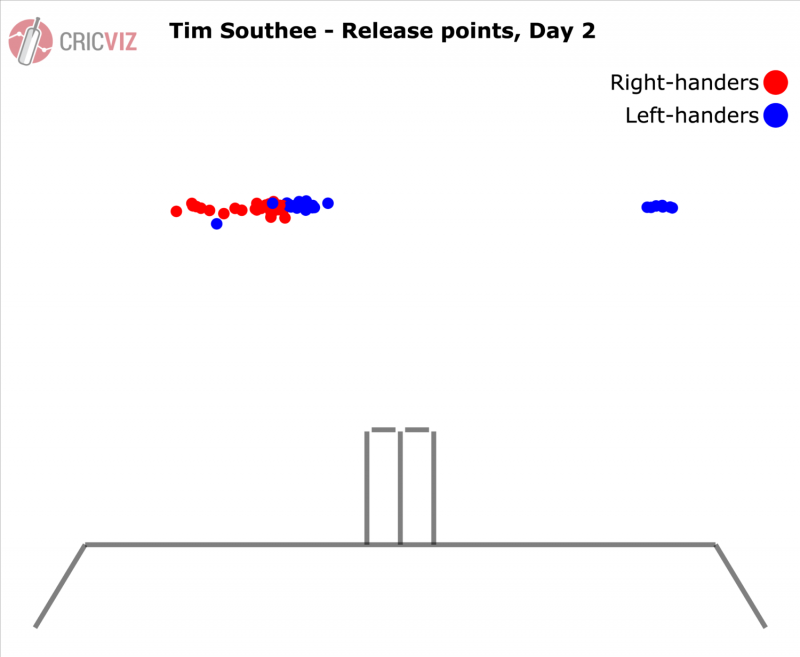 Ben Stokes was Southee’s first victim on day two, dismissed edging a ball that was bowled wider than any other from around the wicket. It was the perfect ball to a left-hander – angling in and then seaming away 0.6 degrees, the most of any ball Southee had bowled at that stage of the innings.

Southee followed up that key dismissal with two wickets in two balls in his next over, first enticing Ollie Pope to flash at a very wide one outside his off-stump and then nailing Sam Curran on the pad with his quickest ball of the day at 133.05kph.

The way Southee picked up his three wickets only served to emphasise how versatile a bowler he is. Yes, both Stokes and Pope were guilty of injudicious drives, but Southee helped create the opportunity for them to do so by changing his release points so adeptly without greatly compromising his accuracy. In the space of 11 balls, Southee had picked up three wickets, one wide to the left-hander, one wide to the right-hander and one dead straight, bisecting the previous two deliveries. 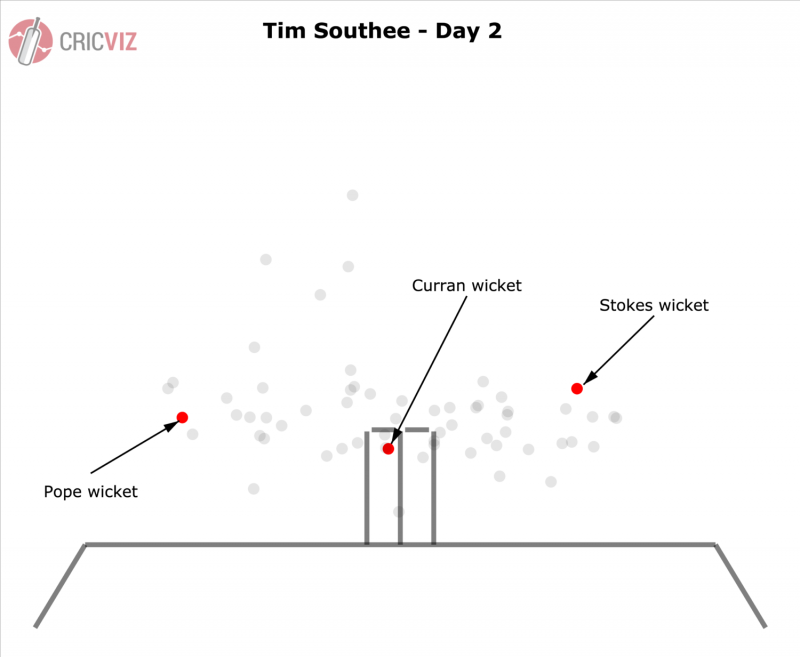 Southee fell short of completing a hat-trick, his radar uncharacteristically askew as the next ball deflected off Jofra Archer’s pads through fine leg, but the damage had been done and England had gone from eyeing a total in excess of 400 to suddenly feeling as though 350 was a long way away.

Today was not the first time Southee has saved his best for England. Last year, he memorably took four of the ten wickets that fell on the first morning of the series as Joe Root’s side were routed for 58 at Eden Park, while in the 2015 World Cup, his 7-33 set the Black Caps on their way to another crushing win. His performance across the last two days was perhaps not as explosive as those earlier instances, but there was plenty to admire in the subtlety with which Southee went about his business in delivering damaging blows to the England middle order.

All fast bowlers can expect to gradually lose pace in the latter part of their career. Southee, three weeks shy of his 31st birthday, is perhaps starting to enter that final chapter and the challenge for a bowler of his style is to find ways to keep threatening top-level batsmen even as elements of his armoury are diminished. While his body might be starting to slow, his mind is showing no sign of letting him down; today he showed how to use all his experience and nous to develop innovative ways to continue to be a thorn in England’s side, possibly for a few more years to come yet.

Also read – CricViz: England go against the grain on day one