How Joe Root handled Jofra Archer and an off-colour day for the supremely talented quick allowed New Zealand to build a formidable position in the first Test against England, writes Ben Gardner.

It would be harsh to be too critical of Joe Root and England after the third day in Mount Maunganui. While the hosts lost just two wickets, England restricted them to 250 runs on Saturday, November 23, keeping things tight even if penetration was hard to come by.

Conditions were far from helpful. There was little sign of the variable bounce that accounted for Kane Williamson on day two, and Root, as always, wasn’t shy of getting creative, employing a field packed full in front of square on the off side to Stuart Broad after the shine went off the new ball, and even bowling a Qais Ahmed-style bouncer to Colin de Grandhomme, which almost foxed the half-centurion. There were, however, some quibbles to be had, and altogether they offered New Zealand the chance to regain the ascendancy.

Many of the issues revolved around Root’s handling of Jofra Archer; the speedster bowled just five overs in the opening session, two fewer than Root himself, after England’s captain opted to begin with Sam Curran and Broad.

Archer’s relative underuse felt like a misstep – he is a generational talent who came into the game with two six-fors and an average of 20.27 in four Ashes Tests, and this kind of flat overseas surface is exactly the sort on which England hope he can provide an edge – but there was some justification. Curran was the pick of the attack on day two and Broad is England’s senior bowler. Root claimed the only wicket to fall before lunch, and only a Ben Stokes drop prevented Leach from getting in on the act too; perhaps Root wanted to make the most of the turn and low bounce on offer until the new ball became available. 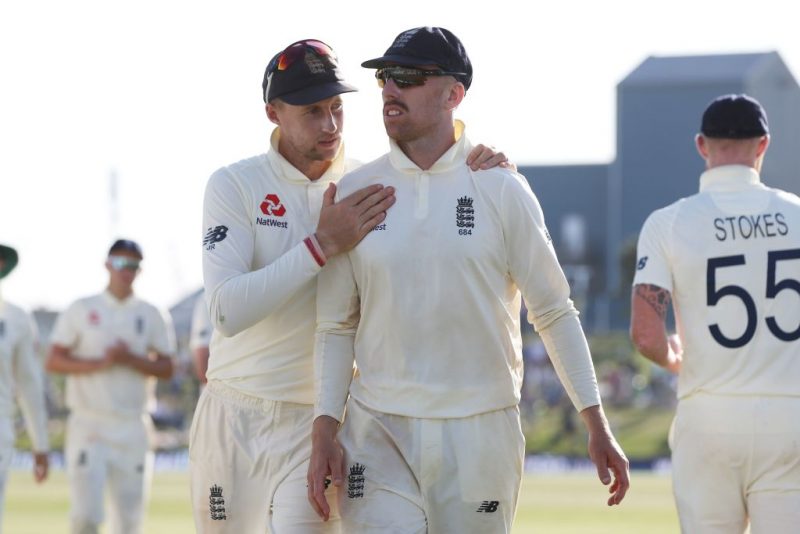 Joe Root and Jack Leach did much of the bowling in the opening session, with Jofra Archer largely unused

When the 80th over did arrive however, three overs before the interval thanks to England’s healthy over-rate, again Root’s choices puzzled, as he opted to continue with himself and Jack Leach until lunch. It appeared the perfect situation for Archer to tear in for one over before resuming refreshed in the afternoon session, especially having bowled so little up until that point. Even after the break, it was Curran and Broad who got first use of the fresh cherry.

Perhaps Root was discouraged by the handful of overs Archer did bowl in the morning, with his speeds largely hovering in the low-80mph region. As he showed when he claimed 6-45 in the first innings at Headingley in the summer, that needn’t be an issue, but with the pitch flat and the batsmen set, a little fire might have served the Bajan-born seamer well.

Eventually Archer, and the heat, arrived, and the day’s most enthralling passage ensued. A six and four in two balls from Colin de Grandhomme was the trigger, and an angered Archer revved himself up and unleashed a full-pace barrage. One nipped in a long way to catch out BJ Watling, though England’s appeal was struck down on review, and, spurred on further, Archer hurled one down at 152kph the very next ball. The stage seemed set for a customary scene-stealing spell, but it wasn’t to be. After two more overs, Archer was removed from the attack once more, not to be seen again until the last hour of the day.

Whether Root can get the most out of Archer will go a long way to determining if his Test captaincy is deemed a success. There is, of course, no doubting Archer’s epoch-shifting qualities and Root must resist the temptation to bowl him into the ground, as he came close to at times during the summer.

Perhaps this was just an over-correction, but Root has a track record of under-utilising bowlers with explanation often unforthcoming. England’s plethora of all-rounders can make getting the most out of each individual a challenge, but even here there was another example, with Stokes only bowling eight of the first 110 overs. During the tea break, Simon Doull wondered whether he might be injured, and when Stokes struck with the first ball after tea, the mystery only deepened. 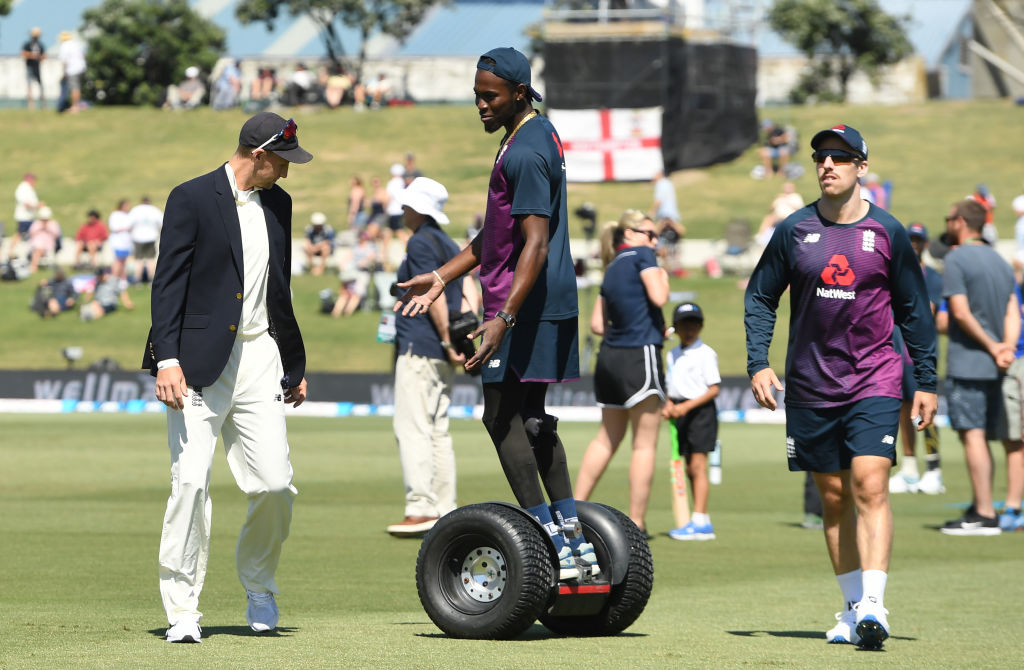 Perhaps the pair just need some time to feel each other out. Root isn’t as natural a leader of men as Eoin Morgan, with Adil Rashid’s contrasting returns in red- and white-ball cricket at least partly down to their differing captaincy styles, but there seems no reason why their relationship can’t blossom in time

Still, Archer remains something of an enigma. While his laidback, easy-going personality has endeared him to England fans and made him a social media sensation, there are times when his unrufflable calm edges into frustrating complacency. Root didn’t seem to enjoy his opening-day Segway warm-up quite as much as everyone else did, while there were two notable, preventable misfields on day three. Archer received a volley after a lackadaisical stop and throw gave New Zealand a second, and responded with a ‘what can you do’ smile after a half-hearted boot at mid-off failed to prevent a single in the final session. His team-mates weren’t quite as philosophical.

His level-headedness will often serve him well. Indeed, during the course of his international career so far – there can have been few more high-pressured starts at the top level – it has been vital. But he and Root must figure out how to get him going on his own terms, without him needing to be smashed into the stands to ignite the spark. A period of learning is to be expected – before this tour, Archer had never played first-class cricket outside of England – but learn he must. 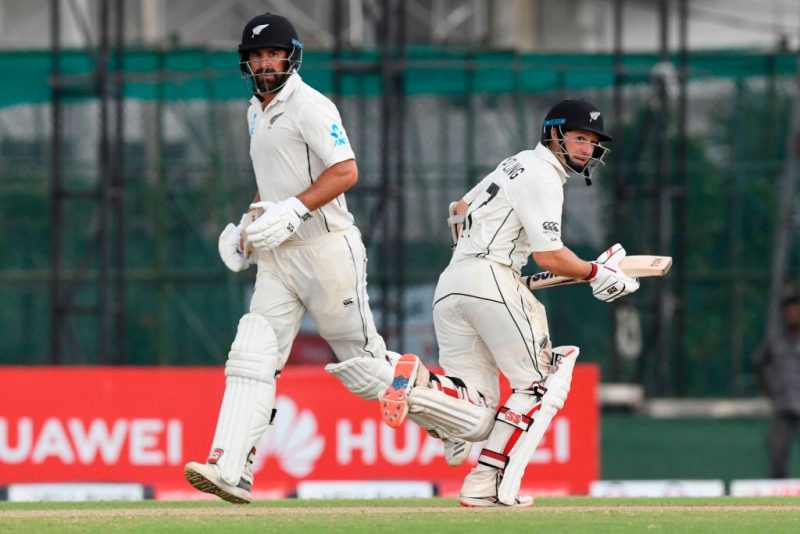 It’s worth re-emphasising that Archer didn’t bowl badly – his hooping knuckle ball to BJ Watling was the delivery of the day. Root didn’t captain awfully, and England’s day wasn’t awful. With New Zealand due to bat last and the pitch set to break up, they remain in the contest, just. But, England fell some way short of the standards they will need to reach consistently if they have serious designs to be the best in the world.

New Zealand, much closer to India than England, despite just one rankings place separating them, showed the way. Far more than relying on a couple of greats with the bat and seamers accustomed to helpful conditions with the ball, theirs is a cohesive, well-drilled, superbly balanced side with all bases covered.

They hang in there when their opponents are on top, and make the most of the opportunities that come their way. Watling, Test cricket’s standout current gloveman and perhaps New Zealand’s greatest, is key, good enough to bat six and thereby allowing New Zealand to accommodate de Grandhomme, who might not have the method to consistently bat any higher than No.7, but is so well suited to the lower slot that he now averages 42 in Tests.

All it takes is to be slightly off, and they’ll make you pay, as they did on the morning of day two, and as they did again here. New Zealand don’t have many days like England had here, and from a hard-fought position of superiority at the start of play, Root’s team face an uphill struggle to keep their hopes alive. They can ill-afford any more slip-ups, small as they may be.