With his match-winning 205 against England in the first Test in Mount Maunganui, BJ Watling became the first wicketkeeper from New Zealand to score a Test double hundred. Let’s take a look at all 200-plus scores registered by wicketkeepers in this century.

After Sachin Tendulkar’s unbeaten double century powered India to 609/6 in the first innings of the second Test in Nagpur, the hosts looked set for a 2-0 sweep. Despite Grant Flower’s fighting 106*, Zimbabwe were bundled out for 382 in their first innings.

However, Andy Flower and Alistair Campbell dug in deep thereafter, denying India on the penultimate evening. It was Zaheer Khan who broke the stand on the final morning, but not before the duo had put on 209 runs for the fourth wicket. Flower, however, continued in the same vein, despite the wicket, smashing 30 fours and two sixes in his marathon innings. He remained unbeaten on 232, which remains the highest individual score for a wicketkeeper in Test cricket.

Zimbabwe held on for a historic draw, and Flower was adjudged the Player of the Match for his outstanding effort. 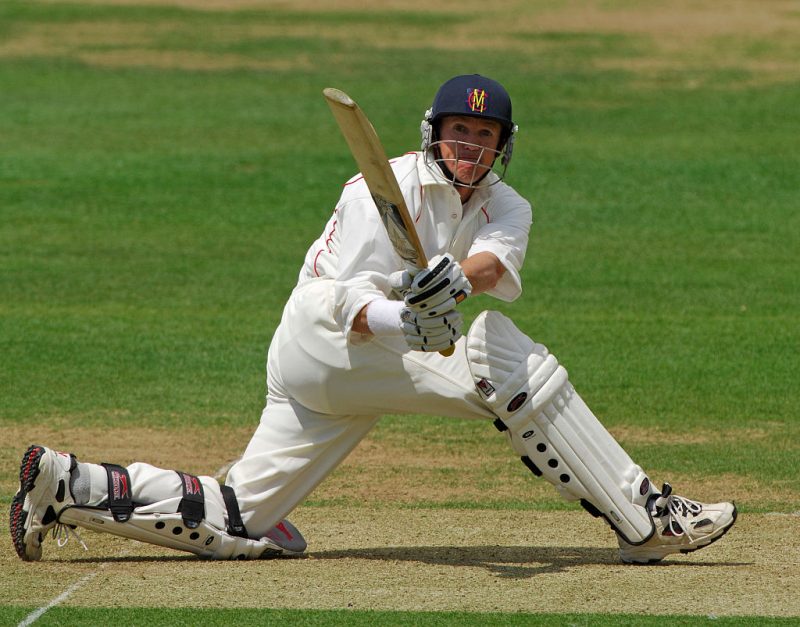 The best wicketkeeper batsman of his era, Adam Gilchrist was an indispensable part of Australia’s all-conquering side in the early 2000s. Just three years into his international career, he slammed a terrific double century against South Africa, which remains the fastest by a wicketkeeper in the longest format, off 212 balls.

After Steve Waugh elected to bat first against South Africa in the first Test of their 2001/02 tour, in Johannesburg, Australia racked up a mammoth 652/7. Thereafter, they were not required to bat again. Chiefly responsible for this demolition was Gilchrist, who came in at No.7 and changed the course of the game.

After Matthew Hayden’s hundred at the top of the order, South Africa had reduced Australia from 224/3 to 293/5 when Gilchrist walked in. The left-hander launched an instant counter-attack, bludgeoning nineteen fours and eight sixes to tear apart the home team’s attack. He finished unbeaten on 204, as Australia declared after crossing 650, and then dismissed South Africa for 159 and 133 for their largest innings victory ever.

Sangakkara ended a prolific Test career with eleven scores of 200 or more, including a triple hundred against Bangladesh in 2014. The first of these came against Pakistan in the Asian Test Championship final in 2002, at Lahore’s Gaddafi Stadium.

Having bowled out Pakistan for 234 after electing to field, Sri Lanka soon found themselves in a spot as opener Maravan Atapattu fell on the first ball of the innings. Out came Kumar Sangakkara, as a virtual opener, to face up to Pakistan’s two-pronged pace attack of Waqar Younis and Shoaib Akhtar.

However, as he did so often in his career, the left-hander soaked up the pressure, helping his side regain their advantage. Having walked out to bat with no runs on the board, he exited having helped Sri Lanka cross the 400-run mark. In a game where no other batsman reached triple figures, Sangakkara crossed hundred twice in one innings, notching up a 327-ball 230.

It was the first double hundred of his career, and also his only one as a wicketkeeper. 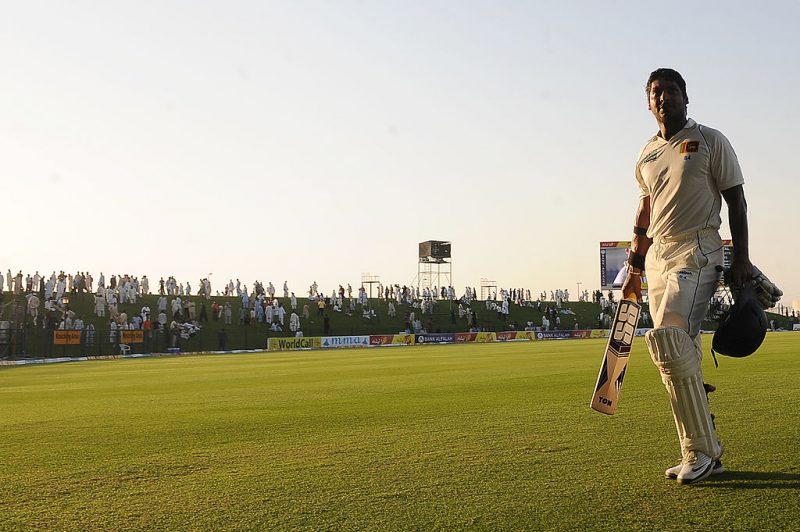 Though one of the sport’s most successful captains, MS Dhoni hit a difficult patch in his Test career in 2011. As captain, he suffered back-to-back whitewashes, by margins of 4-0 each, in England and Australia. Then, after returning to India for the home season in 2012, his team once again capitulated against England, as India lost their first home series in eight years. And with just one Test century in three years, pressure began to mount on the Indian skipper.

Then, Australia visited India for a return series of their own, and with the chips down in the first Test in Chennai, Dhoni produced a masterclass for the ages. After electing to bat first, Australia put up 380 on a turning track at Chepauk. India were reduced to India 196/4, as James Pattinson wreaked havoc with the new ball. In came the adopted son of Chennai, and in partnership with the man who would eventually replace him as India’s captain, Dhoni turned the innings on its head. With Virat Kohli, he added 128 runs for the fifth wicket, before Kohli was dismissed for 107. Dhoni, however, stayed put till the 147th over, and by the time he was dismissed, for a career-best 224, India were nearing 550, setting up a comfortable victory.

Bangladesh’s former-wicketkeeper-turned-specialist-batsman remains the only gloveman to score two double hundreds in Test cricket.  The first of them came against Sri Lanka at the Galle International Stadium, in a game where seven batsmen notched up eight centuries between them.

After electing to bat first, Sri Lanka declared on 570/4, on the back of three centuries. Bangladesh were soon reduced to 23/1, before Mohammad Ashraful’s enterprising 190, supported ably by Mominul Haque, rescued Bangladesh. But when Haque and Mahmdullah were dismissed in successive overs, Bangladesh lost their way again.

Mushfiqur then took centerstage, joining forces with Ashraful, en route to a 267-run partnership for the fifth wicket. Though Ashraful fell 10 short of a double hundred of his own, Mushfiqur carried on and stitched together another 100-plus partnership with Nasir Hossain, before finally being dismissed for a perfect 200 – the first double century by a Bangladesh batsman in international cricket. It was an effort that earned Mushfiqur the Player of the Match award over Sangakkara, who scored two hundreds in the game. 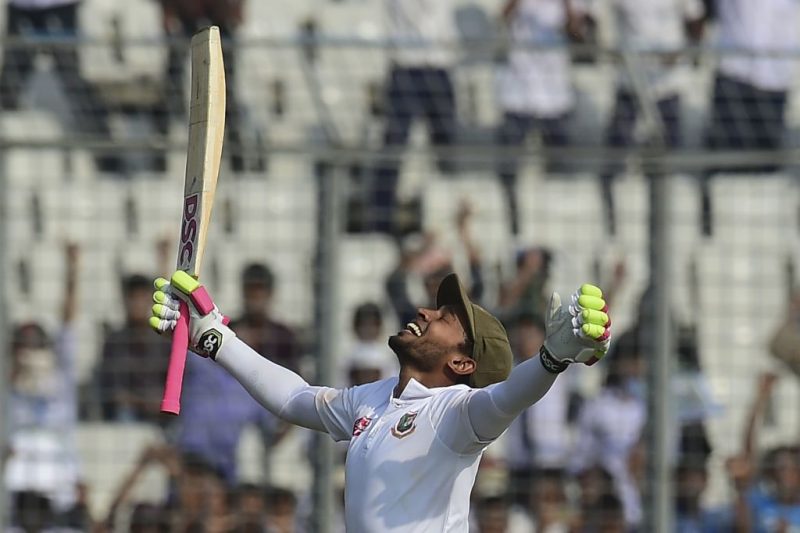 Mushfiqur added another feather to his fabulous cap against Zimbabwe in 2018, when he became the only wicketkeeper to record a second double hundred.

Having lost the first Test of the two-match series, Bangladesh were left facing a must-win in Dhaka. Having elected to bat, they lost their first three wickets for 26 runs. However, Rahim, who came in at No.5 in the fourth over, stepped up for the hosts once again.

He shared 262 glorious runs with Haque for the fourth wicket, leading the hosts’ fightback against a spirited Zimbabwe attack. He remained unbeaten on 219, as Bangladesh racked up 522 and eventually cantered to a 218-run win.

The New Zealand wicketkeeper broke multiple records in his marathon Bay Oval effort. Coming in to bat in the 40th over, with the hosts precariously placed, at 127-4 in response to England’s 353, the right-hander stifled England’s attack to produce a special effort. His 261-run stand with Mitchell Santner, who also scored his maiden Test hundred, broke the record for New Zealand’s highest seventh-wicket partnership. By the time Watling was dismissed, the hosts had crossed 600, forging together a 262-run lead. It was a performance that not only fetched him the Player-of-the-Match award, but also helped him make big gains in the ICC Test Rankings, as he closes in on a top-10 spot.