Tall fast bowler Kyle Jamieson made his New Zealand debut in the second ODI against India, impressing with his bounce and clean action.

He castled Prithvi Shaw with an absolute peach and even bowled a probing maiden over to India captain Virat Kohli in a fine first spell.

But even before taking the ball, Jamieson had an opportunity to show that he is no mug with the bat, as he made a fine 24-ball 25*, forging a resuscitating 76-run stand with Ross Taylor for the ninth wicket.

That, along with his 2-42, earned him the Player of the Match on debut.

Here’s the 25-year-old’s journey until now.

Who is Kyle Jamieson?

Jamieson is a right-arm seam bowler who operates in the early to mid-130s kph range. He made his List A debut in 2014 for Canterbury and played his maiden first-class game later that same year. 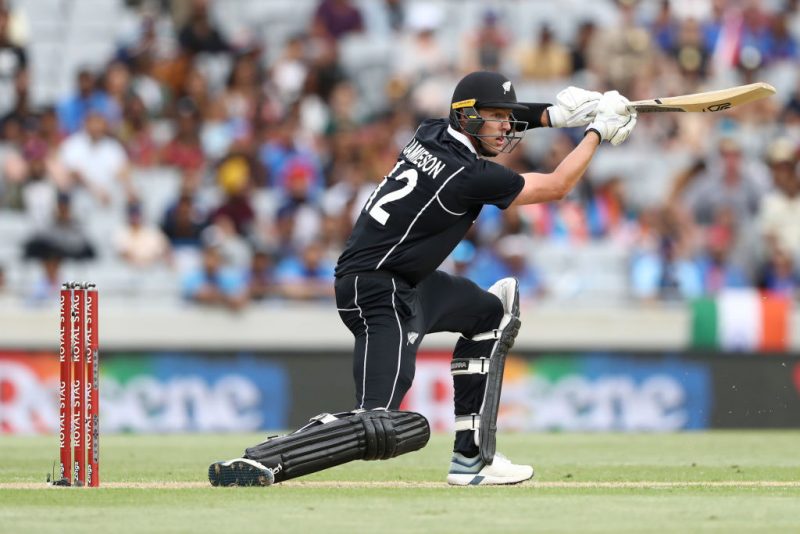 Kyle Jamieson is a dependable bat as well, as a List A average of over 42 proves

Despite a lack of express pace, he raised excitement due to the bounce he is able to extract on account of his height. To put things in perspective, standing at a towering 6ft 8in, he is four inches clear of Ishant Sharma.

Although not really an all-rounder, he is more than competent with the bat. He has one List A fifty, tends to strike at better than a run-a-ball, and his efforts on debut have lifted his average to 42.33.

He now represents Auckland, the place of his birth, in domestic cricket.

What’s the story so far?

Jamieson has come up through New Zealand’s youth cricket pathway. He represented the country in the 2014 U19 World Cup, taking seven wickets in four matches.

A consistent performer in domestic cricket, his profile received a massive fillip when he produced a spell of 6-7 against Auckland in the Super Smash, New Zealand’s domestic T20 competition in early 2019. It remains the best figures in the country’s domestic T20 cricket and the joint-fourth-best in all men’s T20s.

Having moved to Auckland, he has enjoyed reasonable success this season, picking up eight wickets from six games in the Super Smash and nine from six games in the ongoing Ford Trophy. He also impressed in the New Zealand A one-dayers against India, picking up six wickets from three matches, including a spell of 4-49 in the last of those three games.

He got his maiden call-up into the international set-up in December last year, when he was included as a replacement for the injured Lockie Ferguson for the Test series against Australia, but didn’t get a game. With the New Zealand attack particularly depleted by injuries, his debut finally came against India, in the second ODI.

Tall fast bowlers spark excitement for the obvious reason that they are able to extract more bounce than their counterparts, even on flatter surfaces. Also, his conventional action allows him to get movement off the seam, which can be a valuable point of difference in the New Zealand set-up as Trent Boult and Tim Southee are swing bowlers. At just 25 years of age, there is also the chance that he might be able to add a few yards of pace, which will make him a potentially intimidating proposition.

Impressed so far with Kyle Jamieson on debut for NZ. Looks to have a simple action and really gets through it with those long levers in Tent Peg 4 (completion). I feel he could be 10kph faster, too and this makes him a real prospect #NZvIND #INDvsNZ #KyleJamieson

At full strength, New Zealand have an array of high-quality fast bowlers in the stable. When fit, Trent Boult and Lockie Ferguson are a shoo-in. That leaves Jamieson in a tussle with the likes of Matt Henry, Tim Southee and Scott Kuggeleijn. Aiming to become a mainstay of this New Zealand white-ball attack might be a touch too ambitious at this juncture, but the intensive nature of fast bowling, which dictates frequent periods of rest and recovery, could mean that Jamieson could realistically hope to play fairly regularly on a rotational basis. Once in that circuit, there is always the possibility of pushing for a more regular spot.