Once again, Keaton Jennings is back in the Test frame. With an average of 25.19 and only three scores above 50 in his 32 innings, the Lancashire opener has plenty of doubters.

However, his impressive ability to play spin – reflected through his two Test tons on the subcontinent – has landed him another shot on the international stage for the two-match series against Sri Lanka next month. Dan Haygarth examines the story so far.

The start was a dream. After 1,548 runs at 64.5 in the 2016 County Championship, Jennings was called up to England’s tour of India after an injury to Haseeb Hameed, and slotted in as Alastair Cook’s eleventh opening partner since the retirement of Andrew Strauss.

He took his chance and scored a fine 112 on debut in Mumbai. After getting a first-baller in the second innings, he scored one and 54 in his second Test as England succumbed to a 4-0 series defeat.

Despite the team’s struggles, the plaudits were plenty for England’s newest batting hope. After his debut, former England captain Michael Vaughan told Test Match Special: “Jennings looked like he could go through the gears – he’s got the game.

“I see a future England team with Jennings and Haseeb Hameed both in, with Joe Root at four.”

Jennings retained his place for the visit of South Africa the following summer, but the honeymoon period came to a quick close. He struggled throughout the four Tests, scoring 127 runs across his eight innings with not a single half-century to boot. Against high-class operators such as Vernon Philander, Kagiso Rabada and Morne Morkel, Jennings’ outside edge took a bruising, with his tentative prods a feature of his short stays at the crease. Once again, it was time for another England opener to enter the door. Jennings was replaced by Mark Stoneman for the West Indies series that followed and the winter, too. 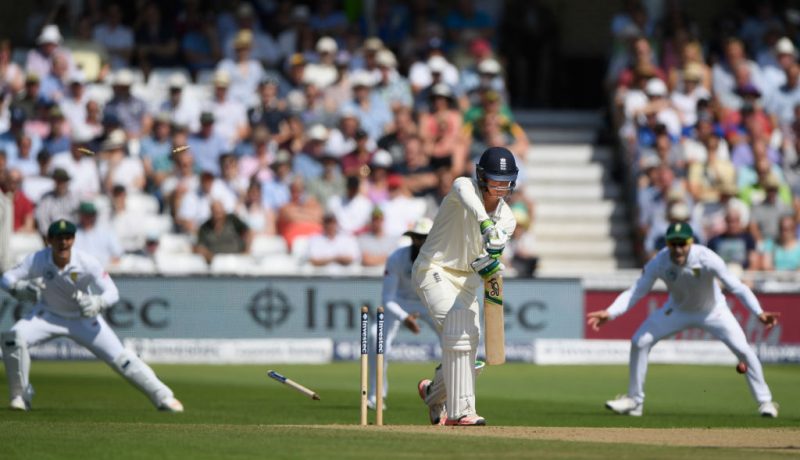 Keaton Jennings struggled against the country of his birth in 2017

After finding form for his new county Lancashire with back-to-back County Championship hundreds, Jennings replaced Stoneman for the second Test of the summer against Pakistan.

Nevertheless, Jennings remained positive, and after being selected for the Sri Lanka tour to follow, he told Wisden: “I promised myself something a few years ago that regardless of what’s happened the previous day I would wake up the next morning with a smile on my face and go again. I’ll always arrive in the changing room with positive energy, and give it a full crack.”

Partnering Rory Burns in the first Test against Sri Lanka, Jennings rewarded the faith shown in him after a torrid summer with an excellent 146 not out, his ability to reverse sweep put to good use. His catching at short leg across England’s 3-0 series win also added great value, although the batting returns dried up as the series progressed.

Related Story: England openers to score a century in their first five Tests since Strauss retired

He was ditched after England’s nightmarish time in Bridgetown – they were bowled out for 77 in their first innings – his struggles against the seaming ball coming under close inspection once more. An almost cruel recall came for the final Test of the series, with Jennings adding just 31 runs across two innings to bring a close to another chapter in his Test career.

Now, having been granted another life thanks to his impressive record in the subcontinent, Jennings won’t want to let this opportunity pass him by.