West Indies have called up Carlos Brathwaite, Sheldon Cottrell and John Campbell to the ODI squad for the first two games against England, after Evin Lewis, Keemo Paul and Rovman Powell were ruled out with injuries.

Brathwaite, the West Indies T20I skipper, played his last ODI back in March 2018. The all-rounder has represented West Indies in 28 ODIs, but has managed to score just 323 runs, with a high score of 33*, and taken just 26 wickets. He will be keen to improve that stat against England. 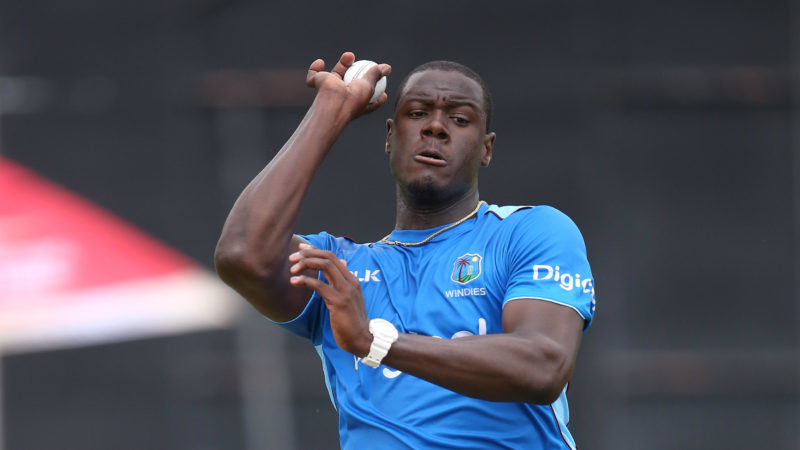 Brathwaite played his last ODI back in March 2018

Pacer Sheldon Cottrell, who played his last ODI in July 2018, comes in as a like-for-like replacement for Keemo Paul.

“With our squad suffering from a few players with injuries even before a ball is bowled, an opportunity presents itself for other players to make a claim for World Cup spots,” said Courtney Browne, the West Indies chairman of selectors.

Campbell, who made his international debut in the Test series, has been rewarded with a maiden ODI call-up after impressive performances in the longest format.

He amassed 176 runs in six innings, including three 40-plus scores. He comes in for the sidelined Evin Lewis, who sustained a groin injury in the Bangladesh Premier League.

“After a good showing as an opener in the Test matches, John Campbell – a fearless and attacking opening batter – will replace Evin Lewis who had to be withdrawn from the squad with a groin injury,” added Browne.

“Carlos Brathwaite who last played in the World Cup qualifiers, and who was a replacement in the last ODI series in Bangladesh, will also join the squad along with Sheldon Cottrell who last played against Bangladesh last year in the Caribbean.

“They will replace Rovman Powell and Keemo Paul who are also both sidelined with injuries.”