The non-selection of Stuart Broad dominated debate on day one of the first Test between West Indies and England. Rich Evans dissects England’s selection headache.

After Charles Colville, anchor of The Cricket Debate, likened Broad’s non-selection to the “Brexit debate”, Bob Willis told Sky Sports that he was “flabbergasted by the selection” and “if I was Stuart Broad I’d have been livid to be left out”.

Willis, plus Sam Curran’s director of cricket at Surrey, Alec Stewart, would have selected Broad ahead of second spinner Rashid – though charged with hindsight and the need to placate Colville’s insatiable hankering for dispute.

Joe Root sweated over his line-up before making a last-minute “gut call”. Instead of Broad, a tall pacer capable of blitzy spells, and seemingly built for lively Caribbean decks, England opted for the gentle swing of Curran with the new nut.

When England can afford to leave out Stuart Broad a man with over 400 wickets then you know their cricket is in really good shape. #ENGvWI

While the Surrey pup has enjoyed a stellar introduction to Test cricket, handing the 20-year-old the new ball was a big ask. At this point in his career he perhaps lacks the pace, height and thuggishness. “If you said to me a year ago, ‘in Barbados we’ll pick Sam Curran to open the bowling ahead of Stuart Broad’, I’d have laughed,” Nasser Hussain said in the Sky Sports commentary box.

Adil Rashid was preferred to Jack Leach even though the Somerset tweaker out-bowled the Yorkshireman in Sri Lanka. Root opted for a second spinner over a fourth seamer – a ploy that relied heavily on Curran shaping the new ball and Ben Stokes offering more than a cameo. Stokes delivered: 3-47 off 19.2 overs. Curran didn’t, claiming 0-54 off 12. West Indies, meanwhile, left out their only specialist spinner in favour of four quicks.

Congratulations to @StuartBroad8 and @jimmy9!

The pair have now taken over 1,000 Test wickets between them. A phenomenal achievement from two genuine greats of English cricket. #WIvENG | #WINvENG pic.twitter.com/Z3242YT6Oc

For much of the day England missed Broad. After Curran had struggled to cause mischief early-doors, Hussain noted that “Broad has become a better bowler in the last hour and a half by not playing”. It was looking like a costly decision until the masterly James Anderson and the lively Ben Stokes ensured England walked off with tired grins at close, as West Indies finished the day on 264-8.

Curran and Rashid – the two big selection calls – went wicketless. The latter and fellow spinner Moeen Ali bowled a combined 29 overs for 115 runs, grabbing just the one wicket and two maidens between them. Maybe England had overthought this particular selection dilemma.

Broad versus Curran dominated the pre-match chat and the immediate aftermath of the confirmed line-ups: little versus large, raw versus ripe. Curran had won seven out of seven and was named England’s Player of the Series against India. Broad had 433 Test scalps, with the latest Jimmy masterclass (4-33 off 24) ensuring their collective list of Test victims hit the 1,000 mark.

An hour before the Test, even a pundit as sharp and forthright as Hussain appeared to waver. Despite describing Curran as “virtually undroppable”, he “personally would have gone for Broad”. The pundit continued: “The ball moves around here and I would want my beat seamer in the team. But Curran is a fantastic cricketer and I have no problems with his selection.”

Been a while since an England selection was this open 20 mins before the toss, and especially because they have too many options rather than too few. Stuart Broad's warm-up not the most vigorous…

Root conceded that “variation” in the attack was a big factor – presumably Curran’s left-handedness giving him the edge. Good-luck charm, all-round prowess and feel-good factor surely all played a part, but whether England plumped for their best team on this deck divided opinion.

Former Ashes winner Paul Collingwood believed the retention of Curran highlighted a “huge shift in mentality”. He added: “England are basing their decisions on the surface. They’re not looking too far ahead. It’s a huge mental shift.” 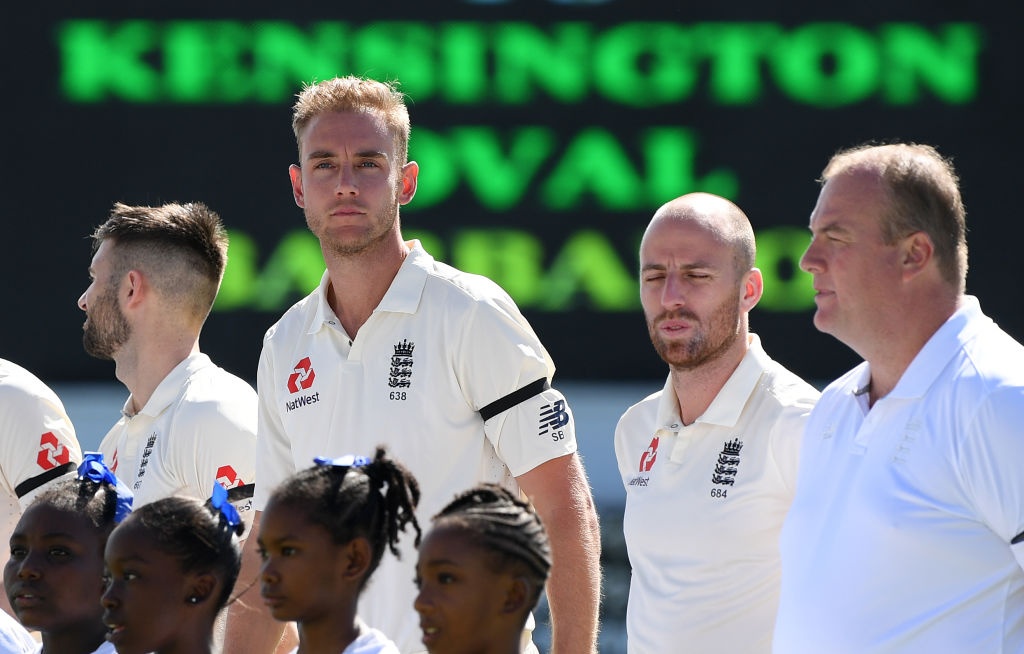 So, what does this mean for Broad? Being discarded in Sri Lanka would have dented the ego, but it was a difficult decision vindicated. Seamers would play a peripheral role, with Curran and Stokes offering ample support to ultra-reliable Jimmy, with the spin trio running the show. The Nottinghamshire quick’s marginalisation in Barbados would have cut a deeper scar.

The crux of the matter is that England have too many players who don’t deserve to be left out.

When wisden.com staff picked their England team for the first Test, there were disagreements in the spin and seam department, while two writers dumped Jonny Bairstow, who scored a ton in his last Test match whilst being trialled at first drop. Chris Woakes – a man whose all-round talents would improve most international sides – didn’t get a mention. Not a word. Sorry pal.

In the aftermath of their cultural review, Australia have been criticised for picking players with “energy”, “elite honesty” and all that jazz, rather than picking their best side. Did England pick their best team at the Kensington Oval?

The Stuart Broad chat on Twitter has gone quiet in the last hour.

The dilemma doesn’t end with Broad versus Curran or Rashid. Phil Walker, editor-in-chief of Wisden Cricket Monthly, blames the selection headache on another Surrey upstart. “Ben Foakes has mucked it all up,” he wrote. “Just when England’s thinktank thought they’d finally cracked it – [Jos] Buttler recalled, Bairstow keeping the mitts, that Curran boy running amok and [Ben] Stokes back in at the gun spot at No.5 – a ‘wicketkeeper’ swings by, with faster hands than Dirty Harry and hair to die for, and throws it all off again.”

Hussain weighed in yesterday: “The three wicketkeeper-batsmen are causing England a few headaches … probably one of them shouldn’t play.”

After a debut ton and exceptional glovework in Sri Lanka, Foakes is another player seemingly undroppable. Leave Foakes out and you remove your best ‘keeper. Since Ed Smith launched his New England with the Test recall of Jos Buttler, he’s not been let down, while England are looking to Bairstow to plug the No.3 hole. 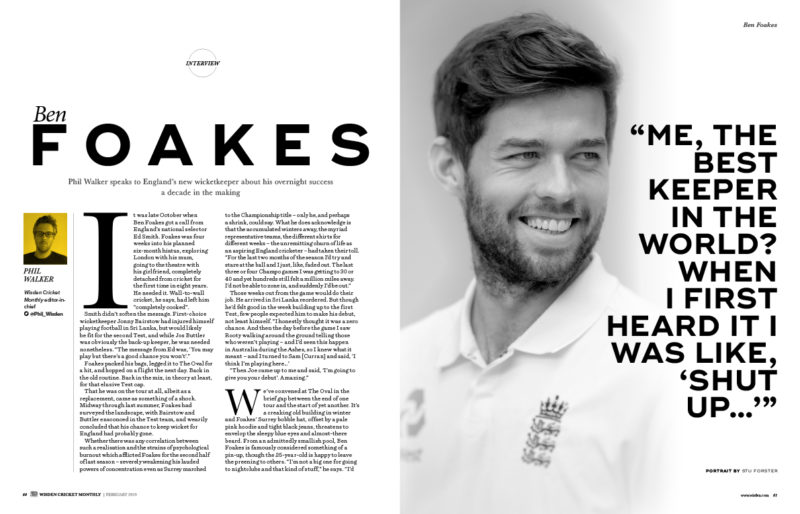 Bairstow can’t keep and bat three – former England stumper Alec Stewart admitted last night it would be near impossible. Drop Bairstow now and you’re likely to bring in another No.3 batsman, but is there a better bet at first drop right now? Maybe you’d replace Buttler or Bairstow with a bowler? As Hussain opined, “Curran is wasted at eight or nine”. But then you’d have to move either Stokes or Root to first drop – the skipper’s happy where he is, and bumping up Stokes would raise the question of workload. There are no easy solutions.

By being plush with all-rounders are England marginalising the specialist? Broad’s non-selection is a blow to all devotees of a single art. It reflects England’s shift towards a greater emphasis on variation in attack, all-round abilities and horses for courses selection, permitted by a plethora of all-rounders. Curran, Rashid and their all-round talents have four days left to prove the selectors right.

Related Story: Stuart Broad puts trolling fan in place with cheeky comeback
England have a bowling line-up for all occasions and 14 players that warrant selection, and it’s causing tensions. When the supposedly “castigated” Bairstow celebrated his comeback ton in Colombo, for a few moments his face matched the redness of his hair. Here was a man angry that he had been discarded for the second Test, revengeful in triumph.

Curran for Broad, Rashid for Leach: in both cases England picked the option that brought variety to the attack and deepened the batting. In previous years, dropping Broad – and your tallest bowler in Barbados – wouldn’t have been entertained, but in having the luxury to deliberate, they have arguably made the wrong call. On day one, when Jimmy and Stokes made the ball spit off a length, that certainly looked the case.