Wisden Cricket Monthly editor-in-chief Phil Walker considers the contrasting careers of two of the world’s best all-rounders as they prepare to face off in the Caribbean.

“Stokes is good fun to be play against, man. Huge competitor! He’s obviously one of the better all-rounders around the world, so I try and keep up with him. That’s my biggest ambition. To become the No.1 all-rounder in the world.” Jason Holder, WCM, December 2018

It was 2010 when Jason Holder first came across Ben Stokes, one windswept afternoon in Rangiora, New Zealand, a small town just north of Stokes’ Christchurch birthplace. It was the quarter-finals of the Under 19 World Cup, yet both kids looked fully formed: Stokes’ shirt was on the small side, those knots of muscle and scowl already on full show; while Holder was just vast, a human wardrobe with a jangling style. Stokes had just taken India for a very quick hundred, and here would take three cheap wickets to help restrict West Indies to 166. 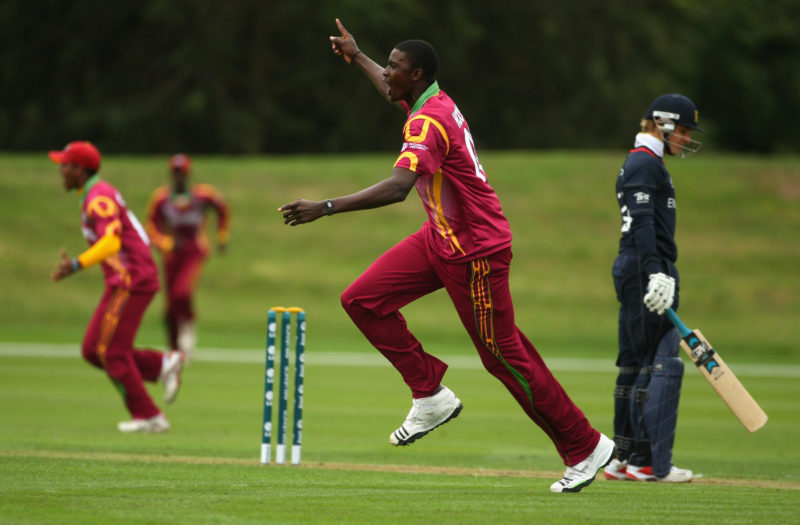 Jason Holder in action against England at the U19 World Cup

England were in a mess from the off. In his first over Holder nicked off England’s opener, Joe Root, for a blob. At No.3, James Vince strummed five fours in his 20 before turning loose. Jos Buttler couldn’t get going, and when Stokes ran past an off-break for 24, England’s chances were blown. Holder did the rest, cleaning up to take five wickets.

They were kids, but experience would get to them fast. Less than half a decade on from that match, Stokes had acquired an Ashes hundred and a reputation, and Holder the captaincy of the West Indies.

In Test cricket the paths of Stokes and Holder have only fleetingly crossed. They have each played full parts in the previous two series without dominating either. Each has one century – Holder’s 104*, his maiden Test ton, helping to draw the 2015 Test at Antigua, while Stokes’ even hundred at Leeds in 2017 helped set up the classic from which the Windies emerged from the dusk on the final day. Stokes has more runs, 404 to Holder’s 234, and Holder edges the wickets, with 16 to Stokes’ 12, and at a slightly better average.

Overall, neither has yet broken free from the other; in the ICC’s rankings list for all-rounders, they are lodged behind Shakib Al Hasan and Ravichandran Ashwin as the highest-ranking seamers in the list. 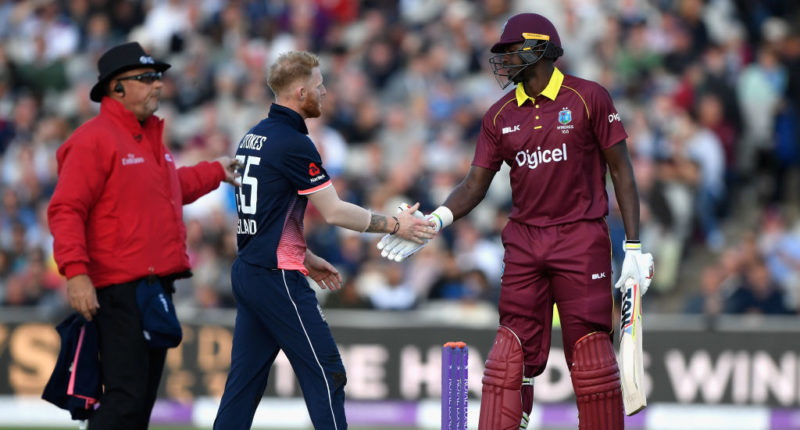 One suspects that Holder is rather more aware of his position, at No.3, in the list – 23 points ahead of Stokes – than Stokes is of his. When I interviewed Holder in December it was clear that his way of weathering the excessive demands of being the captain of the West Indies cricket team is to block out the white noise, get his own game in order and send his mum out to get the groceries when they lose.

It’s an understandable coping mechanism: if he’s personally above censure, then at least he’ll get a decent night’s sleep. And 2018 was indeed a superb personal year. In six Tests, Holder took 33 wickets at 12.39 and carved out 336 runs at 37.33.

Stokes for his part doesn’t really deal in personal feats. In the early summer of 2017, I asked him to elaborate on “the funniest guy in the changing room”, fellow all-rounder Moeen Ali. Were they, in their own ways, vying with each other to become the best all-round cricketer in the world? And if so, who was winning?

The answer has stuck with me, not least because he was a bit peeved by the question. “Well, Mo’s obviously winning at that,” he shot back, “but we literally couldn’t give a shit. We’re both people who will look back at the end of our careers and think about how many games we’ve won, rather than how many runs we’ve made and how many wickets we’ve taken. I would always take being part of a successful team above everything else, and Mo’s exactly the same.” 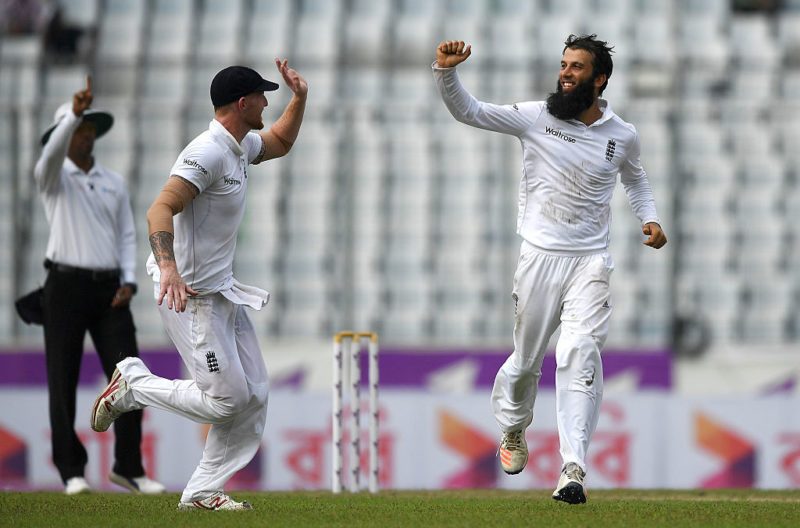 “I would always take being part of a successful team above everything else, and Mo’s exactly the same”

In the mouths of plenty of other cricketers, this would be disingenuous. In Stokes it tells us much of what we need to know. “He’s as near to a coach’s dream as you can get,” England’s assistant coach, Paul Farbrace, recently told me. “He’s a huge team man. Everything’s about the team playing well. He cares about people in the team, and the staff. He’s one of the few who would know the bus driver’s name, the dressing room attendant’s name.”

Which is not to say for a moment that Holder doesn’t know the name of the Windies’ bus driver. He’ll be the bloke in Holder’s ear right now demanding to know how they can lose by an innings and 184 runs to Bangladesh not two months ago and what he’s gonna do about it.

In some ways comparisons are unfair. Stokes is the spirit king of a team with a clear identity and a few all-timers in their ranks. Holder, by contrast, is the only available figurehead of a team culture he described to me thus:

“In our dressing room at present you don’t really have guys coming forward to be as vocal as they probably should. You almost have to pick players to speak. I think that’s to the detriment of the team. If you’ve got an idea, or information to share, you must have something to say about a day’s play.

“I just want to be in a situation where when we cross the line I’m not looking over my shoulder to make sure people are doing what they’re supposed to be doing, fielding where they should be, doing what they need to be doing. As opposed to me having to always do it. I’ve got enough to worry about.”

In England’s set-up, Stokes is given free rein to field wherever he wants. In Holder’s team, he has to make sure his own fielders haven’t forgotten what he’s already told them to do.

Moreover with the ball, each has a very different role. The clues are in the names. Holder is the water carrier, pounding the tarmac, ball after ball, over after over, studiously maintaining what’s left of the old legend as all around him folks stumble and grope for some semblance of control. And Stokes? Stokes is there to set it alight. 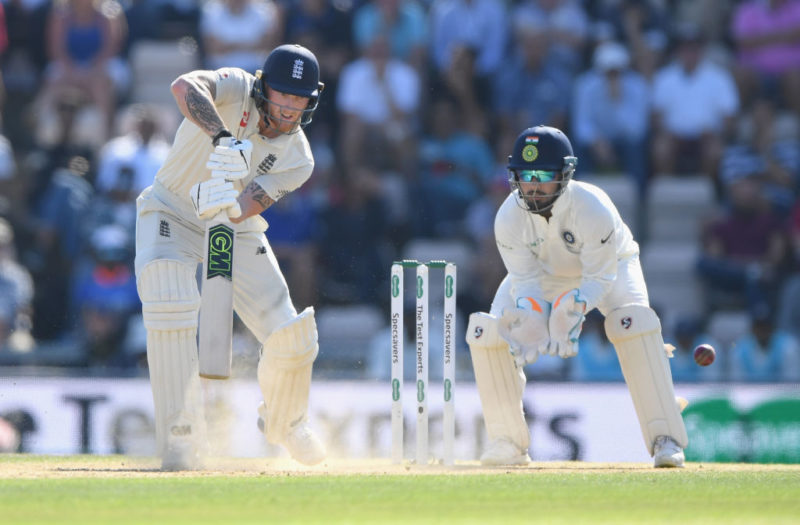 Of the 25 most-successful seamers in Test cricket in a two-year period from November 1, 2016 to October 31, 2018, only one bowler found more lateral movement than Stokes. It makes him a bowler of unplayable deliveries, especially round the wicket to left-handers. CricViz tells us that when he bowls to left-handers, he gets 0.7° of swing from over the wicket and 1.1° from around. He averages 37.90 from over the wicket, compared to 23.63 from round. When it’s flat he puts two men back, asks to be hit and goes short, and when it’s swinging he moves it miles.

Holder, on the other hand, taking the new ball, is more like a mildly subdued Courtney Walsh, insistently metronomic, little more than medium-fast – he was the slowest of that top 25 – but with the trade-off of immense control: he barely leaks more than 2.5 runs per over, and his fruitful record in unprepossessing places such as India and the UAE – where in 2016 his 5-30 at Sharjah underscored a famous win against Pakistan – is testament to the old virtues of patience, nous, and not blinking first.

For all their differences, in other ways their stories coalesce. Responsibility is changing them. Holder’s determination to become the best all-round cricketer in the world clearly has its roots in duty, much as Stokes’ evolvement as a Test match batsman seems grounded in a desire to prove that the No.5 spot – with all its attendant expectations, its calls to maturity and game-sense – is rightfully his.

“If you give him more responsibility you’ll get more out of him,” believes Farbrace. “I think that’s his spot. He’s earned the right to get himself up to five in all conditions.”

"I just want to be in a situation where when we cross the line I’m not looking over my shoulder to make sure people are doing what they’re supposed to be doing"
Either side of his court case, we’ve seen a different version of Stokes the batsman. In 2018, he played a defensive shot to 37 per cent of the balls he faced, the highest figure he’s ever played in a calendar year. He was only dismissed five times when defending, giving him a dismissal rate of 86 balls per defensive-shot dismissal. He also struck considerably fewer boundaries per delivery, hitting just 5.5 per cent of balls he faced for four or six, by far his lowest in a calendar year and down from 9.8 per cent in his infamously truncated 2017.

Holder meanwhile remains locked into the clean-up spot at No.8. As ever, duty calls. His assessment of his batting in Tests carries melancholic echoes of the full-scale job in hand. “I’d like to get a few more Test centuries,” he told me. “But it’s a case of managing the tail a bit better.” For Holder to expand his talents with the bat, he needs others around him to hold up their side of the bargain.

And therein lies perhaps the starkest difference between these two cricketers. Neither man should have to do it all on his own. But one of them feels like he has to.

You can read an extended feature by Phil Walker on the reinvention of Ben Stokes in the upcoming issue of Wisden Cricket Monthly. Buy it here.