New Zealand quick Trent Boult delivered a spell from hell as he single-handedly engineered a Sri Lankan collapse from 94-4 to 104 all-out on day 2 of the second Test in Christchurch.

Not only did he take all the six wickets to fall on the second morning, but he got them all in the space of just 15 deliveries – an all-time record. It was a fitting reward for the star bowler who had done everything right in the first game too, although with very little luck taking just 2-145 in Wellington’s drawn game.

Exploiting the conditions to produce late swing, Boult’s spell swerved the game firmly in New Zealand’s advantage although at the start of the day, at 88-4, Sri Lanka seemed in with a decent chance to get close to New Zealand’s first innings total of 178.

🏏 | Can we transport the Christchurch deck to the MCG overnight?
Here's NZ seamer Trent Boult taking six wickets for four runs in the space of 15 balls against Sri Lanka. #NZvSL
📽️: @FoxCricket pic.twitter.com/ENeMJF6zeX

Boult played down the feat, attributing the success to things as simple as ‘rhythm’ and ‘pitching the ball up’.

“It’s all about rhythm – for me anyway,” Boult said. “It’s about getting into a groove. A couple of wickets gives you a bit of confidence and just lets you go about your thing. Sometimes you’re not really thinking about much and it’s kind of happening for you.

“The plans were simple this morning. It was about building pressure on the guys and it was nice to exploit a bit of their weaknesses with some swing bowling. I was just trying to pitch the ball up really.”

On the first day of the Test, where a whopping 14 wickets fell, Boult was still unable to leave a mark on the scorecard. So his exploits on the second morning were in stark contrast to the returns he had enjoyed in six days of the series so far. 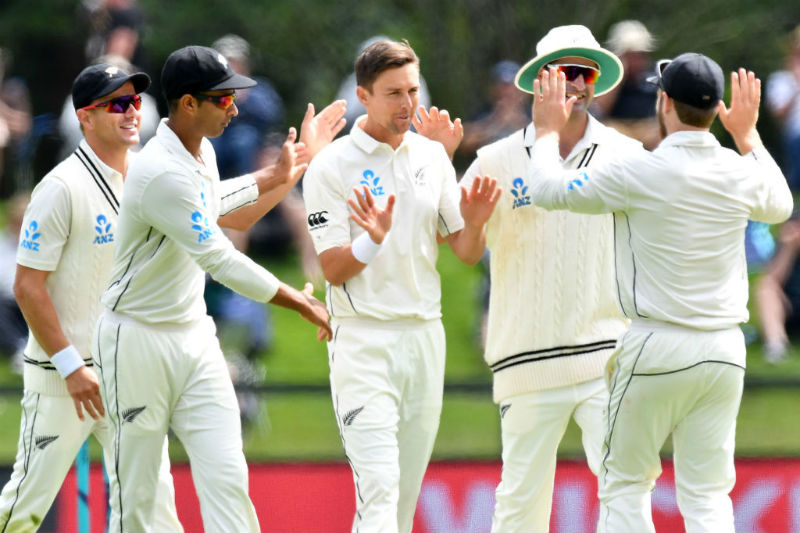 “It’s probably about turning up with the right attitude”

“It’s a funny old game really – it’s probably not how I expected it to happen this morning,” he said. “I suppose it can be easy to get frustrated a little bit, trying to figure out why things aren’t happening.

“I suppose with a little bit more experience – I’m getting old now – I’m realising it can be a funny game, and it’s probably about turning up with the right attitude, and trying to put the ball in the right areas. I was just lucky enough to get a bit of reward.”

After Boult’s carnage, New Zealand openers Tom Latham – unbeaten on 74 – and Jeet Raval – out for 74 – helped the hosts reach 231-2, swelling the lead to 305 runs with eight wickets and three whole days still in hand.