CricViz analyst Patrick Noone examines Joe Root’s first day half-century at The Oval, and explains why it was more worrying than simply another failed chance at conversion.

Joe Root in full flow remains one of the most aesthetically pleasing sights in cricket. Those back-foot punches as he rides the bounce, sweetly timed to the boundary as runs come effortlessly off the middle of his bat.

We know he can bat like that because we’ve seen him do it. Think of his 254 against Pakistan at Old Trafford in 2016, or his 190 against South Africa a year later in his first match as captain. Innings’ of great fluency, class and timing; a champion batsman at the top of his game.

Fast forward two years and things are a little different for Root. The talent remains undiminished but the moving parts that made him such an efficient machine are not quite moving in the right order.

His poor conversion rate from 50 to 100, compared to some of his contemporaries, has been a bugbear of his for some time, but generally the pattern is for him to look like he’ll never get out, reach 50, then find a way to get out.

The scorecard will say that Root once again passed 50 and failed to make a significant contribution beyond that, but this innings followed a different pattern to many of those in the past.

To say Root’s innings today was streaky would be generous. He was dropped three times in the space of 18 balls, first at deep fine leg by Peter Siddle and then by wicket-keeper Tim Paine and Steve Smith at second slip.

Before, Root had only once been dropped twice in the same Test innings; this was the first time he’d been put down three times. Already he was benefitting from hitherto unscaled levels of luck, and that sense of Root not being entirely at the races was further confirmed as he moved towards his half century.

21 per cent of the balls he faced in today’s innings were either missed or edged. Only once has he passed 50 in a Test innings and registered a higher false shot percentage. On that occasion, in Cardiff in 2015, Root played a false shot to 25 per cent of the balls he faced, benefitted from being dropped early on but did at least go on to make 134. 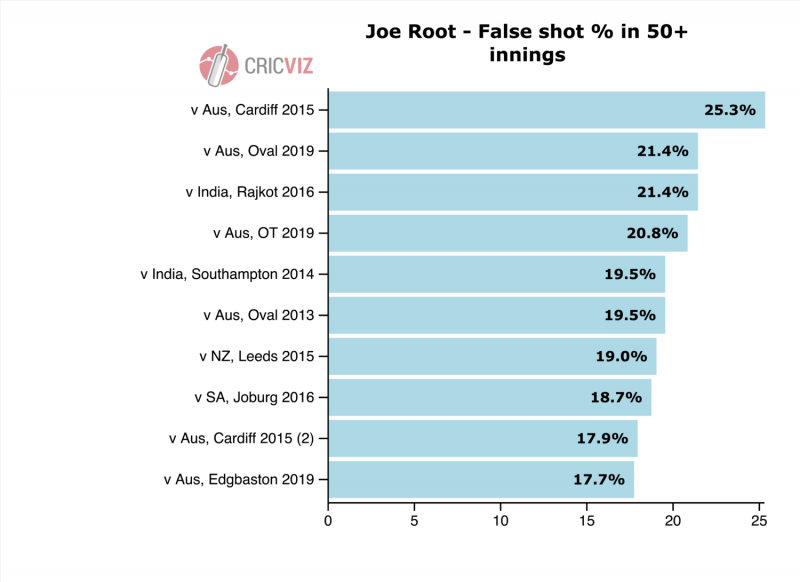 What is perhaps most alarming for the trajectory of Root’s career is that three of the top ten innings on the above graph have come in this series. There are arguably two ways of looking at this – maybe it’s a good sign that even though Root is in such scratchy form, he’s still passing 50 as regularly as ever. Alternatively, one could take the view that such an apparent dip in a batsman’s control is unlikely to ever be a sustainable model for success.

That certainly appeared the case today as Root struggled to settle on a pitch that, according to PitchViz’s deviation rating, was less threatening than any other in the series at this stage of the game. 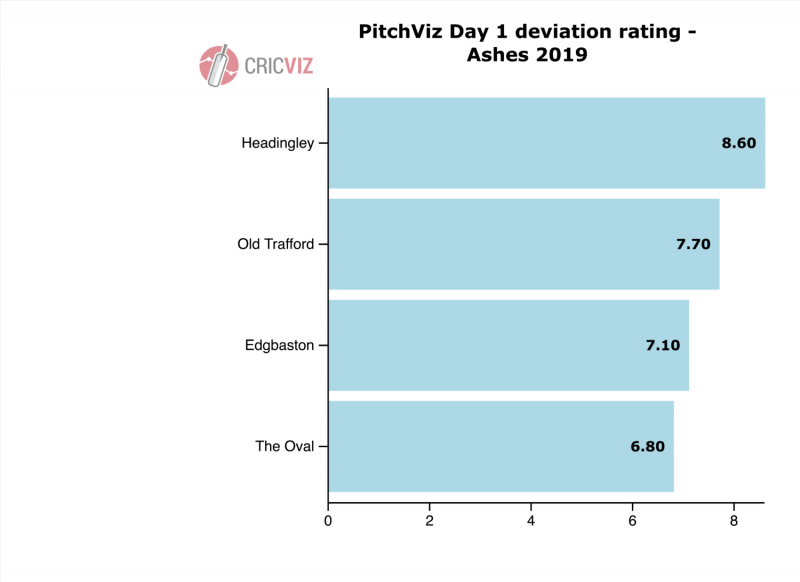 To watch Root today was to watch a man battling with his technique, fighting to get everything going as he knows it can. He appeared to be making a conscious effort to play the ball earlier – utilising positive footwork to try and force the issue as well as negate the movement being found by Australia’s seamers.

But it just never quite clicked. He was unable to make the most of the let offs he received from the dropped catches, unable to power England from an advantageous position into a truly dominant one, unable to perform the role that Steve Smith has in this series and stamp his authority on a match.

To make the harshest of assessments, that has been the story of Root’s career in recent years. 50 and out. Yet there cannot have been many of his innings of that ilk that have felt as much of a missed opportunity as today’s. Here was a chance for Root to remind everyone of what he can do – facing a tired attack who had bowled 107 overs just four days ago, beginning to doubt their decision to bowl first in conditions that were improving for batting, and perhaps missing a little of their bite having already retained the Ashes. Even with these factors seemingly in his favour, it was still 50 and out.

Perhaps the greatest irony of the whole story was that it still took an exceptional piece of bowling from Pat Cummins to dislodge Root, even on a day like today. According to our Expected Wickets model, Cummins’ wicket-ball stood a 10.73 per cent chance of taking a wicket based on the speed, swing and seam movement of the delivery.

It was comfortably the best ball Cummins has bowled to Root in the series, better even than his similarly unplayable ball to dismiss the skipper at Old Trafford. Root might not have been able to keep such a delivery out even if he were at the peak of his powers; in this kind of form, he had no chance.

Root’s innings came to embody England’s as a whole – a missed opportunity, albeit one that was polished slightly by the late innings extravagance of Jos Buttler. In that sense, England are certainly a team that reflects their captain in their current state. Undoubtedly talented and capable of remarkable things, but a recurring tendency to fall well below where they could.