It seems to remarkable to think that it is still two days short of a month since Jofra Archer bowled his first ball in Test match cricket. He’s packed quite a lot into those four matches and 29 days.

Since that explosive debut at Lord’s, during which he bowled perhaps the spell of the summer to Steve Smith, just about every opinion of Archer has been passed. There was serious debate around whether he was England’s most exciting debutant since Kevin Pietersen in 2005; England had finally found what they were missing, and a career of superstardom was guaranteed.

He took five wickets in the match.

Then came Headingley, where he was criticised for bowling too slowly. Suspicions were raised that he was being over-bowled by Joe Root, or perhaps that his recent white ball focus had left him ill-equipped for the rigours of Test match cricket and his pace was suffering as a result. Were England about to ruin their new toy?

He took eight wickets in the match.

Then there was Old Trafford, where concerns were raised about his attitude. Was that open dissent when Root asked him to bowl around the wicket? What was he trying to say by wrapping his jumper around his waist between overs? Should we tolerate such flagrant disrespect for the great game of Test cricket?

He took three wickets in the match.

Of course, players at the highest level of any sport can and should expect criticism. Archer bowled poorly on the first morning at Old Trafford, whatever the reasons, and his performances should rightly be scrutinised to an appropriate level. But Archer seems destined to be a player who polarises opinion and is dealt with almost exclusively in extremes, when in fact he has simply come into the side and made an extraordinarily good start to life as a Test cricketer.

Today was merely an extension of that start. Thanks to his six wickets in Australia’s innings, which took his tally to 22 for the series, Archer now averages 17.27, the best of any England bowler with 20+ wickets since 1956. The last England bowler to average less with the ball with that many wickets to his name didn’t play a Test after the outbreak of World War I. 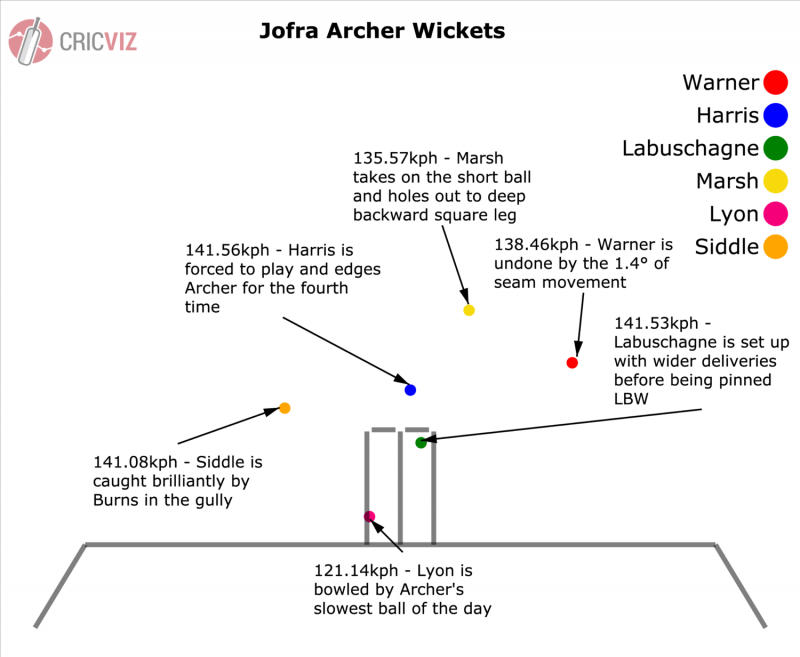 Archer’s full repertoire was on show today as he blew away both ends of Australia’s batting line-up. He forced both openers to nick off, David Warner with a wide one that got the thinnest of outside edges, according to UltraEdge and then Marcus Harris with a snorter that the left-hander had to play at.

It was quick, accurate new ball bowling. The openers only managed one scoring shot between them off Archer, and that was a boundary off the outside edge of Warner’s bat. Opening bowlers are often criticised for not hitting the stumps enough with the new ball, but Archer’s accuracy was such that he didn’t need to. Only two per cent of the balls he bowled in his opening spell would have hit the stumps, the lowest of any opening spell he’s bowled in this series, yet he picked up two wickets.

Archer has shown himself to be able to judge the conditions quickly and adapt his bowling accordingly. His pace might have been down at Headingley, but that match saw him pick up his best match figures of the series. Perhaps it was deliberate, perhaps he is a smart enough bowler that he is able to recalibrate his skills depending on the match situation he finds himself in. The results so far certainly suggest we should trust him.

Marnus Labuschagne was Archer’s next victim and once again it was from a clever piece of bowling that did for Australia’s second-best batsman of the series. The previous over, Archer hung the ball wide outside his off-stump with two bouncers to keep him honest. The next over sparked a complete change of tactic and the ball was speared in at Labuschagne’s leg-stump. 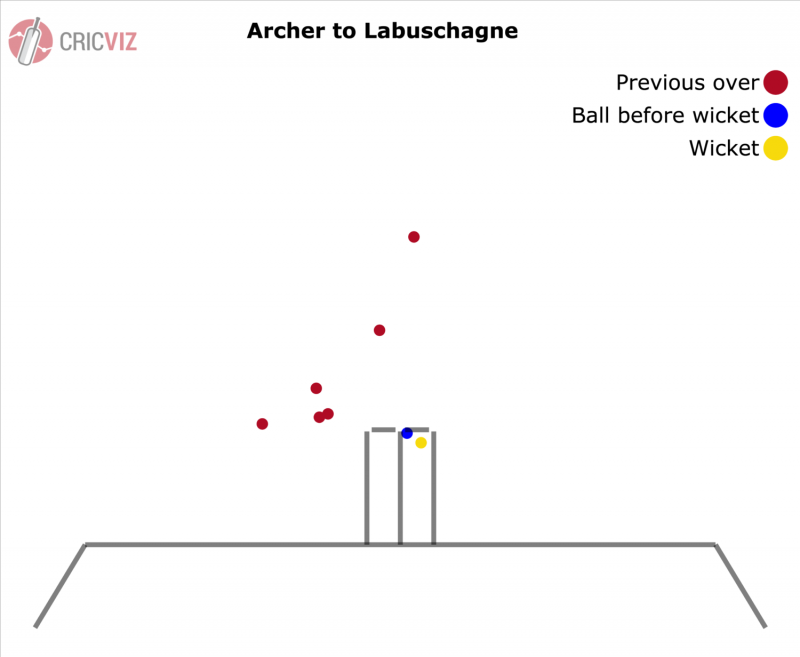 The batsman just got bat on it and Nasser Hussain’s exclamation from the commentary box of ‘you don’t want to miss those!’ was borne out the very next ball as Archer targeted an identical area and this time was rewarded as Labuschagne failed to get his bat down in time. That Archer was willing to repeat the ball after narrowly missing out with his first attempt shows the confidence he has in his ability to execute his plans. It would have been reasonable for him to abandon the idea; the element of surprise having been lost.

Mitchell Marsh departed trying to hoick a bouncer over square leg, the only batsman you could say to have got himself out rather than be got out by Archer today. So, all that was left for Archer to do was to clean up the tail, which he duly did with an expertly executed slower ball to bowl Nathan Lyon and, with a length ball that Peter Siddle fended to gully where Rory Burns pulled off an outstanding catch.

Related Story: ‘He wasn’t as rapid as he is now’ – When Archer got the better of Chase in a Sussex club game

It completed one of the most eventful days of the series so far and one that bore witness to some of the most intelligent, skilful fast bowling we’ve seen. To go from line and length with the new ball, to slower ball yorkers via bouncers to the middle order was a stark illustration of the variety of ways that Archer can pick up wickets.

These are still the early chapters of Archer’s story. He will no doubt play matches in which he needs to dig deeper to make things happen. However, all the evidence to date suggests he’ll be more than capable of finding a way.