Chris Silverwood believes England need to manage Jofra Archer’s workload and “cut him a little bit of slack” after the paceman bowled a wicketless spell in the first innings of the Manchester Test.

“I think we’re just going to be careful with Jofra,” Silverwood told Sky Sports ahead of the start of day three. “He’s playing his third Test match, so we’ve got to cut him a little bit of slack. He’s still finding his way in international cricket. He’s figuring out what it’s all about.

“Test cricket is hard work. You must put the workload in, but it’s there, and he’s trying and we’ve seen what he’s capable of. But he’s not going to do it every day.”

"The hacks scrambled for fresh superlatives for not only the man of today and of the series, but one of the finest cricketers of all time."@Rich_Wisden reports from Old Trafford.#Asheshttps://t.co/4PlfRG05zA

Archer made his Test debut in the second Test of the ongoing Ashes series and returned a brilliant 6-45 in the first innings in Leeds, a Test England won by one wicket courtesy of Ben Stokes’ heroic 135 not out.

In the first innings of the ongoing Test at Old Trafford, however, Archer leaked 97 runs without claiming an Aussie scalp.

"He's still finding his way into international cricket. He's figuring out what it's all about"

“The one thing that we see, sat on the side when he’s running in, he gets his knees pumping and he really attacks the crease,” added Silverwood. “But again, it’s part of his learning process, he is figuring out what he can and can’t do in Test cricket at the moment. And it’s his third game. 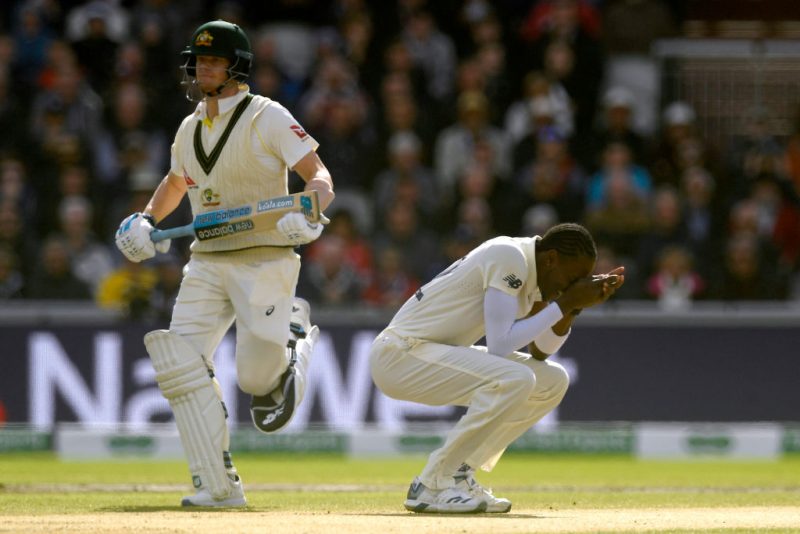 “As fast bowlers, we’re a little bit grumpy, aren’t we?”

“The exciting thing is we know he can hit 90-plus miles an hour but, saying that, I didn’t bowl fast every day either, even though I tried. Sometimes it just doesn’t click.”

The bowling coach believed that England Test skipper Joe Root is also learning how to captain the exciting prospect, especially in the absence of their leading Test wicket-taker James Anderson, who was ruled out of the Ashes series due to injury prior to the fourth Test.

“You’ve got to drip-feed things in,” said Silverwood. “It’s an educational process for Jofra coming into the team, and obviously it’s the same for Joe. He’s learning how to captain Jofra, and hey, as fast bowlers, we’re a little bit grumpy, aren’t we? We normally like to get on with how we want to do it. But you’ve got to be open to suggestions and ideas and try new things as well.”