Australia have gone 1-0 up in the 2019 Ashes series after England were bowled out by the outstanding Nathan Lyon and Pat Cummins on the final day of the first Test at Edgbaston.

The hosts lost four wickets before lunch, and three shortly after, as they capitulated to 146 to hand Australia a 251-run victory in a Test that will be recalled as Steve Smith’s ride to redemption.

With ebbs, flows and sub-plots – Smith’s salvation, questionable umpiring, the potential arrival of Rory Burns – England’s dismal efforts on the fifth day robbed the game of the nerve-wracking finish it perhaps warranted.

Chasing a tall 398 to win, an Australian victory and a draw were the two likeliest outcomes, but England didn’t have enough answers to the brilliance of Lyon and Cummins, who picked up six and four wickets respectively. 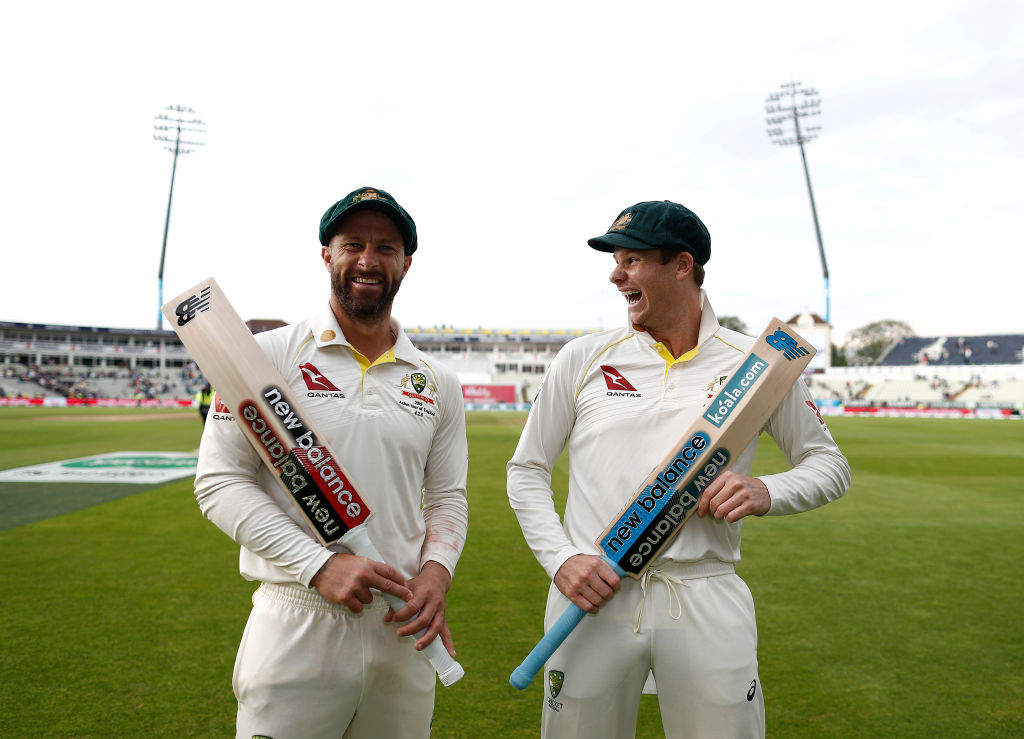 While much of the talk before the final day was about the fourth-innings threat of Lyon, it was speedster Cummins (4-32), whose Test bowling average sits comfortably under 22, who made the first breakthrough after he got one to climb to Rory Burns, who could only fend to point.

Jason Roy was bowled by Lyon after he failed to get to the pitch of the ball whilst skipping down the track and unleashing a naive hoik ill-suited to the task in hand. The Surrey man will deservedly get more time, but with the selectors making a bold call to promote the limited-overs powerhouse to the five-day team, gentle musings over Dom Sibley’s credentials could soon become strident appeals.

The story of the morning so far 👀#Ashes pic.twitter.com/38Jg7hm81s

Umpire Joe Wilson, who produced one of the more hotly debated umpiring displays for some time, continued his unfortunate form when he gave Joe Root out for an lbw that was clearly slipping down leg. Root soon opted for his second successful review after he inside-edged one onto his pads.

After several poor decisions in the opening two days in Birmingham, Ricky Ponting, the former Australia captain who sits on the MCC Cricket Committee, called for the abolishment of the neutral umpire system, believing “the game has come far enough now”, with officials under more scrutiny than ever and assisted by technology. There are currently only five officials on the ICC’s Elite Panel who are not English or Australian, and hence unavailable to officiate in this series, robbing a high-profile event of many of the game’s finest adjudicators. A relaxation of the law appears logical.

Jonny Bairstow gloved to gully shortly after lunch, but not without wasting a review; the out-of-form wicketkeeper hoped it had just evaded his mitt, but replays proved the sweatband had vibrated on impact. Ben Stokes fell next ball, with Lyon finding the edge for his 350th Test wicket, as the tweaker attacked the front pad with a swarm of close fielders.

Chris Woakes (37) refused to go into his shell – his first 29 came off 24 deliveries – penetrating the many gaps in the field. But Lyon (6-49) got two in two, once again winning his personal battle with counterpart Moeen Ali before Broad departed first ball – both edging to slip. Jimmy Anderson, who aggravated a calf injury in the early stages of the game and whose inaction proved costly, hobbled out to the crease before the inevitable ensued. 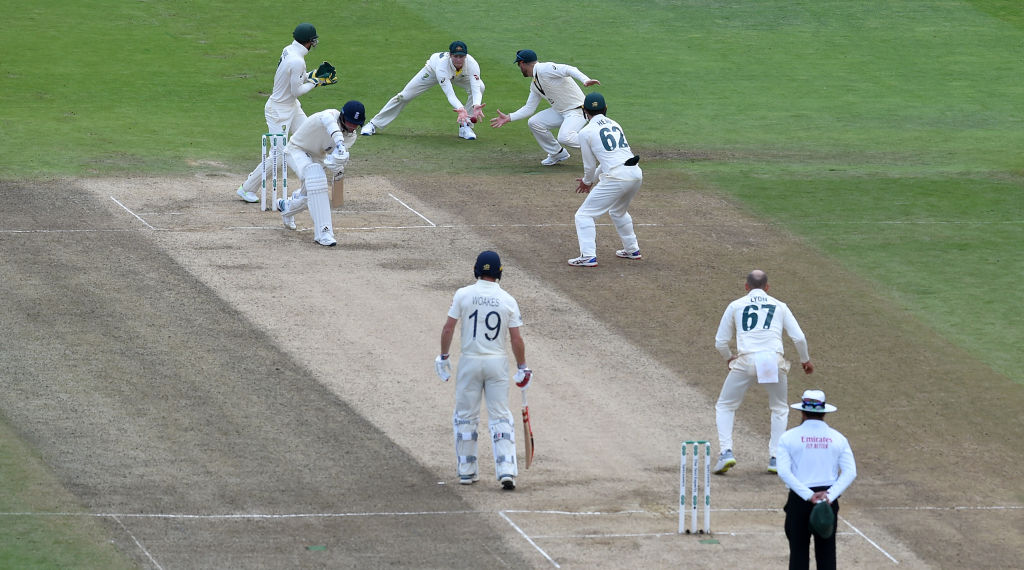 England have some big calls to make ahead of the second Test, which starts on August 14 . The form of Moeen Ali and Jonny Bairstow is a concern. Moeen’s lack of threat with the ball on day four crippled England’s chances – his 2-130 wasn’t enough in spin-friendly conditions – while he confessed ahead of this Test that “my batting confidence is at its lowest” (you couldn’t imagine Shane Warne or Glenn McGrath offering such a bleak confession on the eve of an Ashes series).

Tweaker Jack Leach is primed for a recall after impressing with both bat and ball against Ireland last month, while Surrey stumper Ben Foakes and Jos Buttler remain alternative options with the gloves.

Related Story: Wisden men’s Test innings of 2019, No.3: Steve Smith back where he belongs

With Anderson likely to sit out the Lord’s Test, trading England’s highest ever wicket-taker for World Cup hero Jofra Archer hardly represents an improvement, but it will at least instil another dimension to England’s one-paced attack at Edgbaston. More crucially, the speedster could provide the x-factor capable of unsettling the superior Steve Smith. 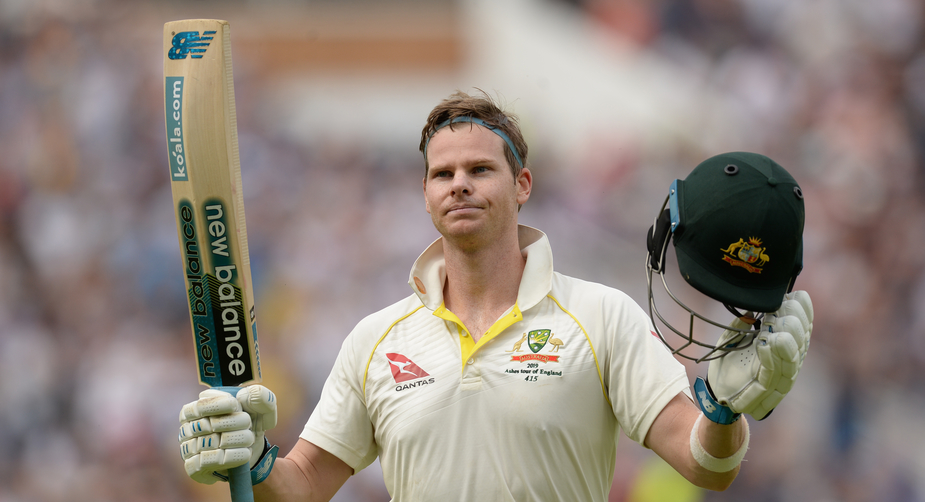 Steve Smith departs after scoring his second hundred of the  match

Smith recorded his 25th century in his 119th innings on day four to leapfrog India skipper Virat Kohli, who achieved the feat in 127 innings. Australia’s No.4 also became the fifth Australian batsman to register centuries in both innings of an Ashes Test.

While the game didn’t enter a thrilling final session, Chris Woakes tendered a fitting finale when he skewed to Smith at second slip. Test cricket has its master back, and England have a mighty task on their hands trying to tame this unique, ruthless cricketer in the remaining four Test matches.

After Kohli’s exhibition in the first Test between England and India last summer, the Edgbaston faithful were once again treated to a masterclass that will live long in the memory. You live every ball when you’re watching Smith; every glorious cover-drive, nervy thigh guard tap and post-leave spasm. He is the batting manifestation of the cricket tragic. Difficult to watch, impossible to ignore. We must saviour him, for we may not see a greater Test batsman in our lifetime, one so dedicated to his art that it hurts. He hurt England over the last five days, and England’s post-World Cup honeymoon period has been rudely terminated.