Former Australia pacer Jason Gillespie, who is currently serving as the head coach at Sussex, lavished praise on his county prodigy Jofra Archer, crediting the 24-year-old with bringing “a new dimension” to England’s Test attack.

Archer, one of England’s heroes in their triumphant 2019 World Cup campaign, has made an outstanding start to his long-format career. The right-arm pacer has already snared 13 wickets in two games, and produced a fiery performance of 6/45 at Headingley in the third Ashes Test.

While Archer’s impact was instantly felt, upon his debut at Lord’s, he brought his best in the next game in Leeds. Gillespie, who has worked with Archer since his Sussex appointment in November 2017, believes that the bowler’s biggest strength is his ability to listen, adapt and improvise.

Steve Smith: “There’s been a bit of talk that he’s got the wood over me, but he hasn’t got me out.”

Jofra Archer: “Well, I can’t get him out if he wasn’t there.”

“At Lord’s, he was going quite hard with a lot of short stuff,” the 44-year-old told BBC South Today. “At Headingley, he saw the conditions were different and he adjusted his game and looked to bowl that little bit fuller.

“Jofra coming in has added a new dimension to England’s attack. We have been saying at Sussex all along that he is ready to go. He has shown that – although he has only played two Tests.”

Archer was first considered a T20 specialist, but has taken giant strides to offer something in all three formats of the game. Gillespie, who has witnessed his transformation from the early stages, said that it took a lot of effort and guidance for the pacer to attune to the requirements of every format. 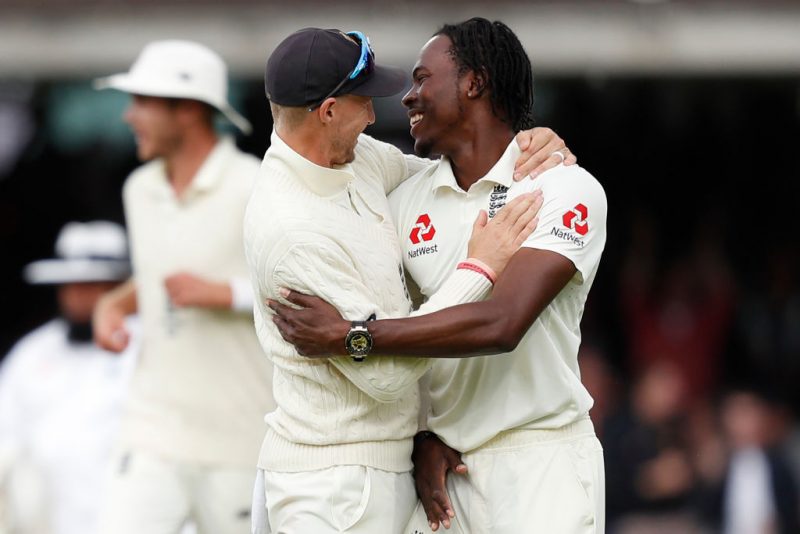 Archer has had a terrific start to his Test career

“In Test cricket, you have to play the long game,” Gillespie said. “Sometimes, I think Jofra’s adjustments from playing T20 and 50-over cricket to the long form – and I have certainly seen it going from T20 to 50-over cricket – he looks to try a lot of different things when you don’t need to.

“Jofra listens, and in the space of one Test, he adjusted and was rewarded. The only thing I have spoken to him about is to make sure he stays disciplined in his line and lengths.

“He is a pretty laid-back character and is doing a wonderful job so far in the infancy of his international career. He is buzzing. He is like a kid in a candy store playing for his country. He is absolutely loving it.”