Australia head coach Justin Langer revealed the conversation he had with Steve Smith before the No.4 batsman returned to the crease, after being forced to retire hurt earlier, with a blow to the back of his neck by a searing Jofra Archer bouncer.

Smith, who has been hands down the best batsman in the Ashes so far, has already accumulated 378 runs in three innings at an average of 126. Having racked up scores of 144 and 142 in the first Test at Edgbaston, Smith had reached 80 in Australia’s first innings on the fourth day at Lord’s when he copped the brutal blow. The impact was so severe that Smith immediately went down and physios rushed onto the ground to his aid. 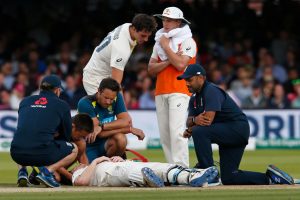 It took a while for the 30-year-old to gather himself and walk back to the pavilion. But 45 minutes later, he stunningly made his way back to the middle, after the loss of Peter Siddle’s wicket. Smith had undergone three concussion tests before that, and cleared all of them, to the satisfaction of team doctor Richard Saw.

Langer also said that Smith had assured him that he was okay to go out, and revealed that the blow was hardly what was running through the batsman’s mind when he checked on him.

“I was saying, ‘mate, are you sure you’re okay?’ These are like my sons right, so you’re never going to put them in harm’s way, even though you’re always in harm’s way with Test cricket,” Langer said after play on Saturday. But he’s going, ‘mate, I’ve got to get out there, I can’t get on the honours board unless I’m out batting’.

“He wouldn’t have gone out there unless we thought he was okay. We asked him over and over again. I asked him behind closed doors two or three and times and in front of the group. What else do you do? The medics cleared him, he wanted to get out there.”

“The stage was set, the other players merely extras. This, this right here, was what we came to see.”@benjonescricket on an incredible battle between Jofra Archer and Steve Smith. https://t.co/fYuAgb6oRp

But while Smith returned to the crease, he looked skittish and unsure of himself, and could manage only 12 more runs before falling on 92 to Chris Woakes. The former captain prefers to not have a stem guard, an accessory that could have softened the blow, attached to his helmet. However, Langer admitted that Smith might have to rethink his decision after Saturday’s incident, which sparked memories of Phil Hughes’ death in 2014.

“I’m sure after today it’ll get talked about again, I know they [stem guards] came in after the tragedy of Hughesy [Phil Hughes],” Langer said. “He might rethink it now, after seeing what happened today.”

"These are like my sons right, so you're never going to put them in harm's way, even though you're always in harm's way with Test cricket"

As for the game itself, Langer was excited about the prospect of a run-chase in front of a packed Lord’s crowd on the fifth day. “Who would have thought, we’re playing at Lord’s, we’ve lost nearly a couple of days to rain, and it’s absolutely game on tomorrow,” he said.

“It’s tough to bat on, which I don’t mind, and it’s going to be a great day’s Test cricket tomorrow.”