After three days at Edgbaston, the first Ashes Test is inclined towards England, but with Steve Smith still batting, things could go either way, and England fast bowler Chris Woakes acknowledged as much.

Much like in the first innings, Smith looked in sublime form, going to stumps looking ominous at 46*, having taken Australia into the lead. Having already made three breakthroughs, though, England would still feel confident about their prospects, but are well aware that another Smith hundred could upset their plans. 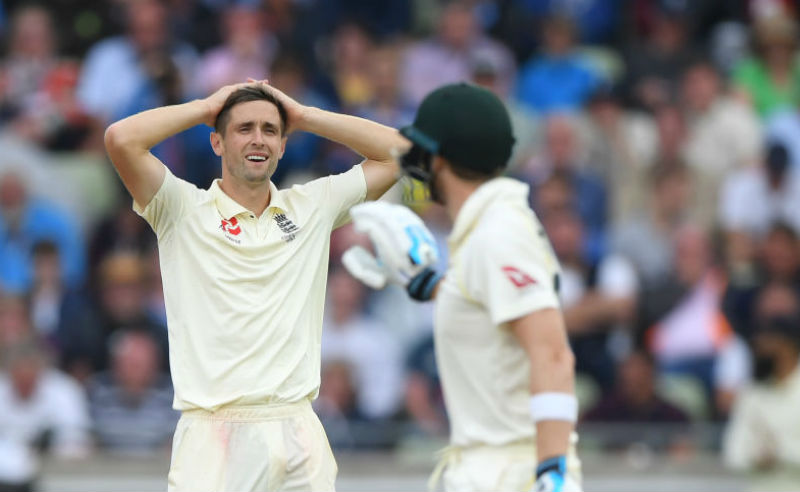 “On this surface, in particular, it’s hard to force the issue as a bowler”

“He’s a world class player, Steve,” Woakes said. “We’ve got to find a way to get him out, I think. On this surface, in particular, it’s hard to force the issue as a bowler. A lot of pace has gone out of the pitch. So you’ve to find ways to build pressure and attack at the other end and hold at one to try and get the batsman to make mistakes.

"I was talking to the press before about great players and how they always stand up when you need them. And I think he's done that in this game. Without him, we would be in a bit of trouble"

“But Steve doesn’t make too many mistakes. We’ve got to find a way. We’ll look at a few plans overnight and see what we can come up with.”

However, if those plans against Smith don’t come to fruition for whatever reason, England will have to channel their energies towards causing damage at the other end. Woakes, however, insisted that such an approach would be England’s least preferred choice, especially given that Smith was able to raise Australia to 284 from 122-8 in the first innings after having found unlikely partners in Peter Siddle and Nathan Lyon.

“Obviously, Steve’s a very good player – don’t get me wrong, we’ll try to get him out as well – but whenever you get a new player at the crease, you try and attack him as much as possible. That’s when you are most vulnerable as a player,” he said.

"Every time he plays in England whites it feels like Woakes is on trial."@Yas_Wisden on an all-rounder who doesn't get the credit he deserves, but still has much to prove.#asheshttps://t.co/xgPHFiv4bA

“We saw in the first innings, we built a lot of pressure on the other end. We’ll try and do that as well, but at the same time, we’ll certainly be looking to get Steve out if we can. We saw how destructive he was in the backend of the first innings, it’s important that we try to get him out as well.”

From Australia’s point of view, their best hopes of setting England a daunting, or even tricky, target are pinned on Smith. Fast bowler James Pattinson, who claimed the wickets of Jason Roy and Joe Denly, was effusive in his praise for the former captain.

“Look, he’s a fantastic player,” he said at the end of day’s play. “I was talking to the press before about great players and how they always stand up when you need them. And I think he’s done that in this game. Without him, we would be in a bit of trouble.

“He’s been copping a bit from the crowd, which has amused a lot of people, but to his credit, he just gets on with it. He’s someone who lifts the group when he’s out there.”