Emotions ran high for Steve Smith after making 144 of Australia’s first-innings 284 in the opening Ashes Test – a classic knock that rescued them from 122-8.

The former Australia captain admitted to being at a loss for words to sum up the depth of what he was feeling, as he came back from a year where he became a much-maligned figure in public, lost his captaincy, a spot in the team, and “a bit of love” for the sport as well.

Smith, who was playing his first first-class game since the Newlands Test, said after the day’s play on Thursday, August 2, that the time when he was recovering from the elbow injury he picked up during the Bangladesh Premier League hit him the hardest.

"This extraordinary tangle of arms, legs and searing clarity has produced a batsman with the front and record to tap Bradman on the shoulder and enquire what it’s like up there."@Phil_Wisden reports on day one of the #Ashes Test at Edgbaston.https://t.co/3ryS7XKJE4

“There were times throughout the last 15 months where I didn’t know if I was ever going to play cricket again,” he said. “I lost a bit of love for it at one point, particularly when I had my elbow operation.

“It was really bizarre – it was the day that I got my brace off my elbow that I found my love for it again. I don’t know what it was, it was like a trigger to go say, right, I’m ready to go again, I want to go out and play for Australia and make people proud and just do what I love doing.

“I’ve never had those feelings ever before, where I didn’t have a great love for the game and it was there for a little while. Fortunately, that love’s come back and I’m really grateful to be in this position now, playing for Australia again and doing what I love.”

Coming in at 17-2, in the eighth over of the day, with the ball doing a bit and Stuart Broad and Chris Woakes in flow, Smith said he aimed to “trust his defence” and keep it simple. Even as wickets fell at the other end, he dug in, partnering with Peter Siddle and Nathan Lyon to take the team close to 300 and bringing up, by his own admission, one of his greatest centuries.

“I had to work really hard,” he said. “I got beaten a few times but I just had to let that go and concentrated on the next ball and kept digging in. I know that the first Test of an Ashes series is always big so I didn’t want to give my wicket up easily, I wanted to keep fighting. 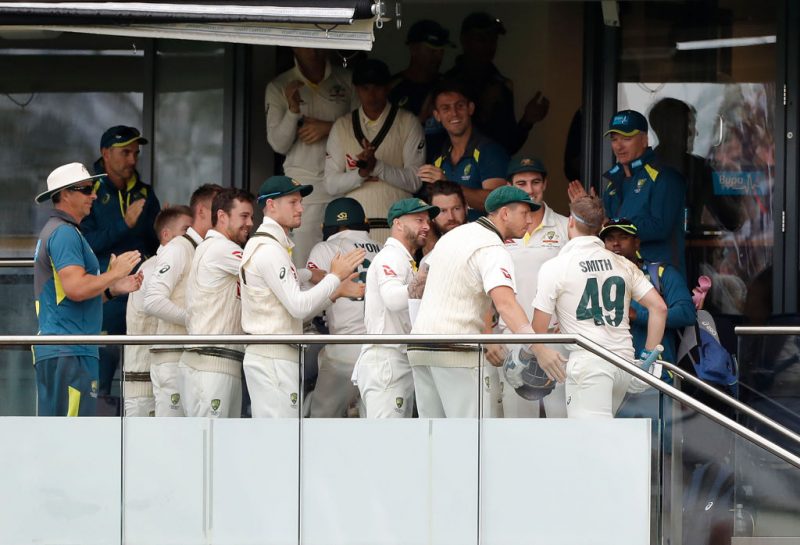 “I’m just proud that I was able to dig in and fight through the difficult periods and get ourselves to a competitive total.”

The hundred, when it came, was a special moment. Smith had been welcomed to the middle by a chorus of boos, and the Edgbaston crowd kept the volume up through his innings. But even they were forced to stand up to acknowledge a remarkable innings. Smith, meanwhile, blocked all of that out. His eye was on the dressing-room and his celebration directed at his ecstatic team-mates – their reaction, he said, sent “shivers down my spine”.

“I thought Peter Siddle did a magnificent job,” he said, grateful for the support he got in the middle as well. “That partnership we were able to form, and Nathan Lyon as well, he was magnificent. He actually said to me, ‘That’s the most nervous I’ve ever been out in the middle batting,’ so to be able to get to my hundred and give him a really big hug and let all my emotions out, that was really special.”