After registering his first half-century of the ongoing Ashes series, Australia opener David Warner acknowledged the role of luck in helping him put behind the poor form that has plagued him since his return to Test cricket.

After making scores of 2, 8, 3 and 5, Warner gritted it out in tough, overcast conditions on the opening day of the third Test at Headingley to make 61 – one of two noteworthy contributions, alongside Marnus Labuschagne’s 74. Together, the duo accounted for over 75% of Australia’s runs.

Marnus Labuschagne (74 runs) and David Warner (61) were terrific against some brilliant England bowling.

Our Aussies all out for 179 at stumps #Ashes pic.twitter.com/VYPGK0OLfx

It wasn’t all easy going for the left-handed batsman, however, as he survived many close chances. But he said that his approach to batting in England was what it’s always been. “My theory has always been the same when I come to England,” Warner said. “For me, it’s about taking out that lbw equation but then not trying to get out nicked off from a good length ball and knowing where your off stump is there. You want them to come into your pads when you bat outside off, and you can get the cheeky one inside midwicket. That’s the thought process behind it.

“It’s been challenging, but coming into it mentally, I felt like I was in form. I’ve had three balls where I probably couldn’t have done anything with them.

“Today was about trying to negate that good ball and not get out to it. I had a lot of luck, I played and missed quite a lot, but I kept my bat nice and tight. That’s what I wanted to do and I was happy to get out if a good ball was going to get me out. I was very pleased with the way I adjusted. I moved across a little bit more, so my bat was covering that off stump, allowed me to leave a little bit more.”

Warner and Labuschagne came together at the fall of Usman Khawaja’s wicket, at which point the tourists had been reduced to 25-2. From there, the duo stitched together 111 for the third wicket, but Australia once again collapsed once the partnership was broken to lose their last eight wickets for 43 runs and be bowled out for 179. 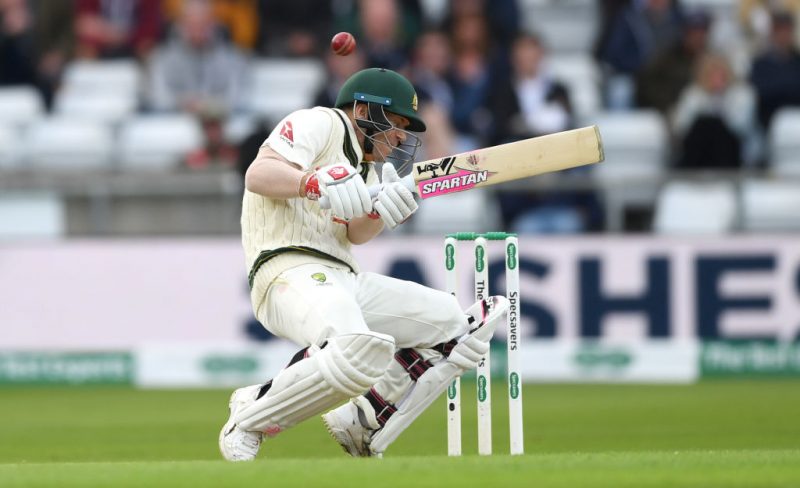 “We always knew that partnership with me and Marnus, that’s how cricket goes, you’re going to lose one straight away, if not the next five overs. But if you get through that, as a new batter, it can get a lot easier. Early back in their second spells there, it’s challenging. That’s the beauty of this game. It’s hard to start, especially when you have two world-class bowlers coming on, who are hitting their line and length impeccably.

“You are always nice and sharp when you have a lot of movement out there, you have to commit to the front foot or the back foot, you can’t get caught on the crease. They [Stuart Broad and Jofra Archer] bowled unbelievably. It’s always challenging, but as a batsman, you have to stay in a positive mindset. A play and miss is a good shot.”

"My theory has always been the same when I come to England. For me, it's about taking out that lbw equation but then not trying to get out nicked off from a good length ball and knowing where your off stump is there."

Warner was also all praise for young Labuschagne, who in his first two innings as Steve Smith’s replacement, has made scores of 59 and 74 against world-class fast bowling. “He’s just taken the bull by its horns, he’s got that opportunity and he’s working his backside off to reinstate himself into the Test arena, and he is doing himself every favour by hanging in and batting the way he is.

“So, obviously, it wasn’t ideal that Steve couldn’t play, but [Labuschagne] got another opportunity to come out and play. He’s a fantastic player and he has got a lot to offer and we have seen it first hand there.”