After a series of dramatic events, Kevin Pietersen was recalled to the England squad for the India tour. What followed was a bludgeoning of all bowlers involved. Phil Walker reminisces on a knock that was voted No.3 on our men’s Test innings of the decade series.

Let’s forget the whole circus, the naughty messages (“BECAUSE THEY’RE MY MATES!”), the fallout, and the preposterous charade that saw Kevin Pietersen, sombrely suited and head bowed, ‘reintegrated’ into the fold. Remember the match. Remember the knock. Remember what the point of Pietersen was in the first place.

It probably had to take place in the heart of Mumbai, right in Sachin’s back garden. Pietersen, a natural-born iconoclast, was never more alive than when he was pulling up someone else’s geraniums.

England were already one down. (It hadn’t been the best of moves, picking those medium pacers at Ahmedabad; Pietersen, meanwhile, not trusting his defence, had been clean-bowled for 3 by the left-armer Ojha.)

India batted first. Pujara hunkered down, but Sachin, felled by a brute from Monty Panesar, was spun literally off his feet, muddying his palms on the filthy ground. After Tendulkar went, Yuvraj was shotless and Dhoni becalmed. It was Swann and Panesar, imposters in the heat, spitting bouncers off a length on day one. All things considered, Pujara’s hundred was deemed to be crucial.

Some time on day two Pietersen walks towards his new captain with the score 68-2. Mumbai cranks up again. He may have styled himself as a citizen of nowhere, but this is Pietersen’s kind of place. In India, an icon of any hue is lionised as one of their own.

Pietersen has never been much for plotting his way around a thing, he prefers to walk right along the ridge of its spine, bones cracking underfoot, staying upright as long as he can. He faces his first ball a few minutes before tea. Harbhajan Singh lands it in that dried puddle on a length. Pietersen check-slaps it through the covers for four. A quiet single off Ojha, and off he walks.

It’s Harbhajan to resume after tea. His fourth ball’s short, and cut behind square. The next, fuller, is dumped over mid-wicket. Pietersen turns then to Ojha, running at him, ripping a drive past mid-off. Four overs later, he goes over the same fielder. 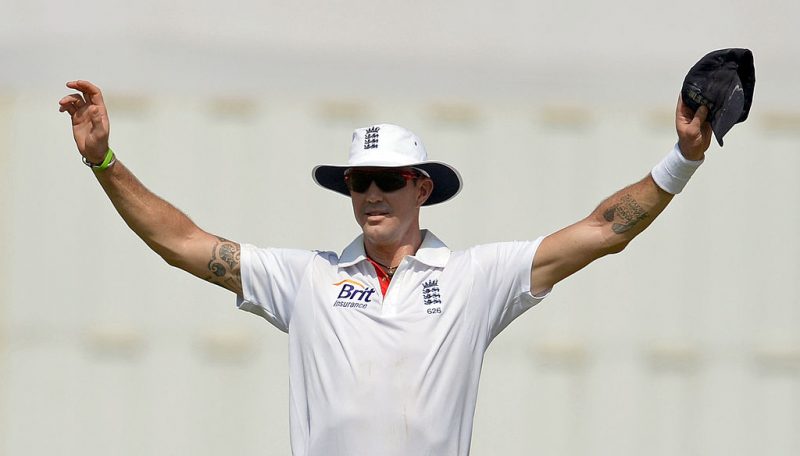 Kevin Pietersen was back, and how!

Against the spinners, he’s by turns expansive and compact. The levers stretch out to smother the spin, alerting the wrists against the turn, the bat way out in front. For the sweep he gets low and hits late, and down the ground, he makes himself vast. A back-foot punch takes him to a 62-ball fifty. That will do for the day.

England resume on day three 149 behind. Reconciled, making a go of it for the kids, Cook and Pietersen walk out together. At first Pietersen’s skittish, almost running out his captain, but they inch up to 196-2 (Cook 94, Pietersen 73) by the start of the 71st, and it’s Ojha again. The first two balls are blocked back to the bowler. Third too. The fourth turns, but too much. There’s a half-shout but it’s missing. The fifth spits, it’s kicked away, the ball running up the body like scurvy. Pietersen’s nowhere near the sixth, so he whacks it straight over mid-on.

The first ball of Ojha’s next over is short and wide and slapped for four. Next over, Ashwin’s arm ball is drilled through the covers. A Harbhajan off-break is swept behind square for four more. Suddenly he’s on 96.

Harbhajan goes round the wicket to a leg-side field. There’s only one idea left. Pietersen reverses the hands to guide it past the only remaining slip fielder. He raises his arms in slow motion, momentarily stunned by what he’s just done.

There’s still time. The second-fastest 150 by an overseas batsman in India. A shot off Ojha that would become one of the two favourite shots of Pietersen’s career.

Unpack that sentence. Inside it you’ll find the genesis of his genius, and the reason why he turned good men to drink.

I asked Pietersen about this once (in a cranky and unforgettable interview that took place on the eve of the 2013/14 Ashes tour which concluded, a little worryingly, with the line: “It will all come out in my book”). At least he seemed to like this question. “The shot that sticks out? Ojha, bowling over the wicket, landing the ball on the stumps and hitting him over extra-cover for six. Occasionally I look back and go, ‘How the hell did you do that?’”

Decade in review series is brought to you in association with Perry designers of distinctive club blazers made in Yorkshire since 1946.