It looked ugly. It was ugly. Middle stump was down, and Grant Elliott’s feet were all over the shop. He’d just felt a disturbing force: full, swinging, lightning-quick Mitchell Starc. It was Elliott’s first and final ball.

“That ball I got from him – I was just… nowhere,” Elliott told me earlier this year. “He was on fire.”

After my interview with Elliott, Starc went to the World Cup and put together an impressive highlights reel. I mean, who will ever forget that ball to Ben Stokes? Curving inwards, the base of off stump the target, the soon-to-be great Stokes floored. With 27 wickets, Starc finished as the leading wicket-taker in the tournament.

He’d done the same four years earlier, topping the pile with 22 (alongside Trent Boult). Sixteen of them came in winning contests, but it was the six-for in a loss that proved unforgettable. 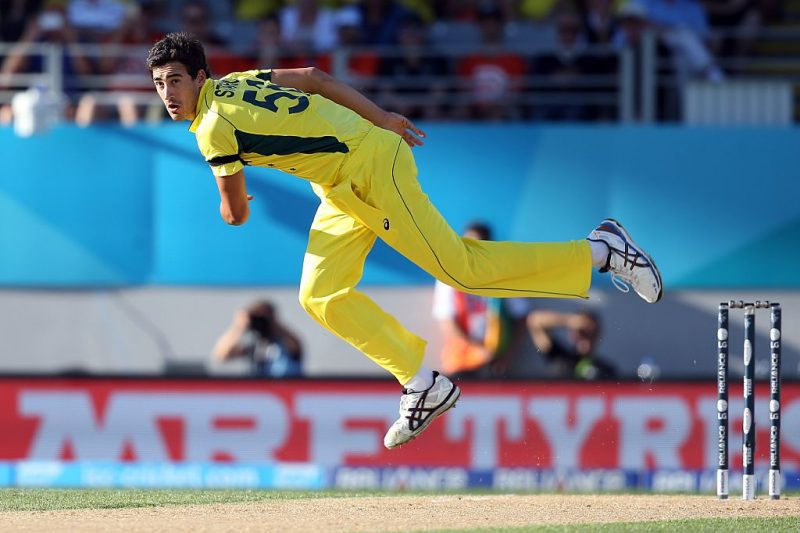 Eden Park was the picturesque setting, and it seemed that Boult’s five-for was to be the lead act, with Australia routed for 151 inside 33 overs. Brendon McCullum’s blitzkrieg of a half-century had New Zealand looking home and dry. Out in the eighth over, McCullum left his side on 78-2, a demolition job looking more than likely.

But the fun was just getting started. Starc, who already had Martin Guptill’s wicket, began the ninth over with a ball you wouldn’t wish upon your worst enemy: the inswinger, designed for destruction, left Ross Taylor’s off stump in a world of hurt. Elliott then came and went.

Still, New Zealand had the game. With 13 runs left to go and five wickets in hand, there was little tension in the air. (I decided to turn off the television and head elsewhere – the regret has yet to leave me.) Luke Ronchi then felt the heat of an extraordinary bouncer. His expert sway should have saved him and yet, somehow, Starc found a way to get a tickle on the glove.

He returned to the more scenic route by rattling Adam Milne’s stumps, and Tim Southee could do little about the deathly yorker that left Australia just a wicket away, with New Zealand still needing six runs. Starc’s will had combined with his ability to produce this obscene display, to put Australia in reach of a victory they shouldn’t have had any right to be near. Aaron Finch leapt into his arms to say it all: Starc’s teammates believed he could save them.

Boult somehow survived the onslaught and before Starc could bowl his 10th over, Kane Williamson cracked a nerveless six off Pat Cummins. New Zealand in ecstasy and Australia in agony. Starc was denied perfection.

A month later, it was the Australians who were smiling. Back on their own turf, a seven-wicket win at the MCG handed the serial winners another World Cup. Starc took home a winner’s medal and the Player-of-the-Tournament award too.

Out of bowlers with over 100 ODI wickets, nobody has a better strike-rate than Starc, with a wicket arriving every 25 balls. There have been few finer sights this decade than Starc running in with the white ball.

The first stump-splattering. The swing, the pace, the length – Taylor’s horizontal swipe was never going to do the job. Starc raised his finger and smiled. The wheels were in motion for the marksman to let loose and provide New Zealand with the greatest of scares.