Marlon Samuels’ 78 in the World T20 2012 final, which helped West Indies secure their first global title for over 30 years, sits at No.2 in Wisden’s men’s T20I innings of the decade.

Oh Marlon Samuels. Magnificent, misunderstood, much-maligned Marlon Samuels. Look at those numbers, averages hovering around 30 and strike-rates at the low end of acceptable, and you’d imagine an honest trier, who made the most of his ability, not the would-be world-beater who could do it all when the mood took him, the tragedy and the beauty being that only the most trying of circumstances saw him summon very best.

Never in a World Cup final has one batsman stood so far ahead of all the other batsmen on show; none of Chris Gayle, Kumar Sangakkara, Mahela Jayawardene, Angelo Mathews, Tillakaratne Dilshan or Andre Russell could get to grips with a surface among the tackiest and trickiest produced for a global showpiece.

The first of those has made a career out of biding his time before exploding. Here he made a funereal 3 off 16, and almost took West Indies’ title hopes with him. At the halfway stage they were 32-2, and Samuels was 20 off 32. Then he flicked the switch.

As is natural for a player who shines when spoiling for a fight, he took aim at Sri Lanka’s best, Lasith Malinga. The full-and-straight specialist went for five yorkers in the 13th over, nailed two, missed the other three by a combined distance of about a foot, and Samuels, sitting deep, smashed him twice over the leg-side, and once over extra cover for six more. If to everyone else it seemed audacious, for Samuels it was pre-ordained. “I already played Malinga in my mind last night so I decided to take him on,” he explained after the game.

The result no longer forgone, a game of cat and mouse began between Samuels and Ajantha Mendis, as Samuels made mayhem at one end and the mystery spinner inroads at the other. Ajantha removed Dwayne Bravo in the 14th; Samuels plundered Jeevan for four and six in consecutive balls. Ajantha raised, scalping Keiron Pollard and Russell in consecutive balls; Samuels went all in, carving Malinga for four, mistiming a hook but still managing six, before timing one as sweetly as anyone has timed anything, on a pitch where no one else timed a ball all evening, and sending it all of 108 metres back. At this point, 51 runs had come off his last 17 balls. 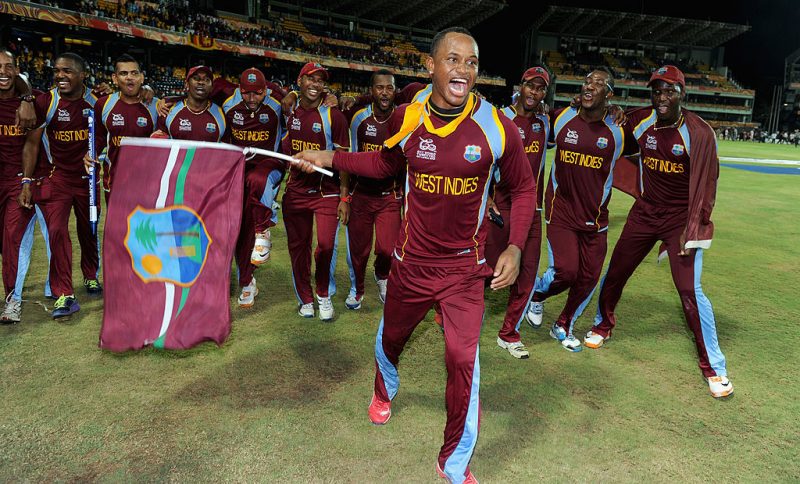 Marlon Samuels: “This is a victory for the entire Caribbean”

He fell two deliveries later, but his final maximum had taken West Indies past the 101 that was all Sri Lanka would be able to muster. Whether that too was a premonition, Samuels didn’t say, but after a 30-year absence from World Cup Finals, in which time cricket in the West Indies had been reduced and ridiculed, an embarrassment on their long-awaited night had been turned into an exultation. “This is a victory for the entire Caribbean,” said Samuels. It must have tasted all the sweeter for the man who made it so.

As close to a yorker as Malinga came in that fateful 13th over, but by this point Samuels’ mind was set. With the front leg cleared, those hands and arms came into play, with Samuels opening the bat face to slice rather than trying to get properly underneath it. So good was the timing that it flew 80 metres. He was away.