During his extended peak, AB de Villiers was the most talented cricketer on the planet whose versatility was unrivalled. Ben Gardner profiles one of the five Wisden Cricketers of the Decade.

Above all else, AB de Villiers should be remembered for his blocking. Only one other batsman this decade – Hashim Amla – has faced more than 200 balls in a Test innings for less than 50 runs. De Villiers has done so three times, a feat putting him level with New Zealand’s John Wright atop this particular all-time tree.

There are, of course, many lists which de Villiers heads, most of which demarcate his status as the most limitless batsman of his generation, including the treble of the fastest ODI 50, 100, and 150. But it’s the anti-hitting record which gets to the heart of what makes de Villiers untouchable. Put simply, during his extended peak, he was able to do basically everything, and do it better than basically everyone else in the world. 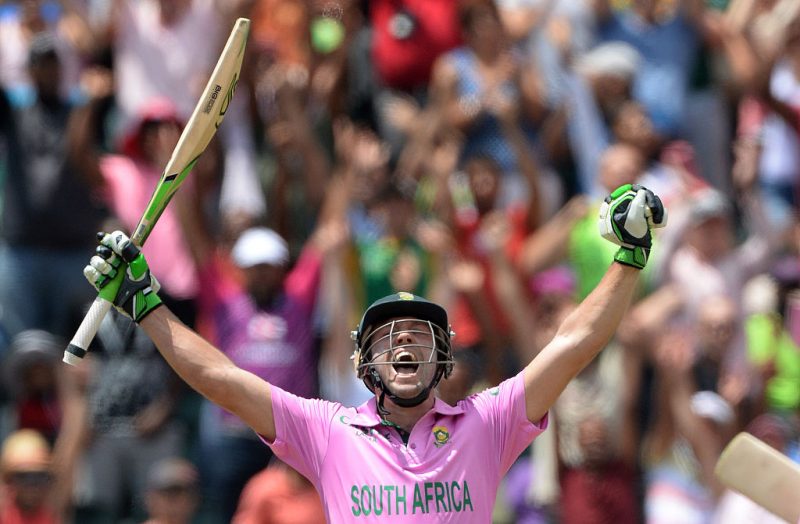 It’s why the nickname ‘Mr. 360’ suits him perfectly. Not for its original intention of indicating his ability to hit any ball bowled in any conceivable direction, but because it marks him out as the most complete batsman of the modern age.

Watching him elicits a unique feeling. Not one of witnessing someone able to do almost anything conceivable with a bat in hand, but of someone able to mould that supernatural ability to every given situation. His clarity of thought is on a par with his raw talent. Forget changing gears seamlessly, de Villiers is automatic.

And yet, de Villiers hasn’t always found a natural place in the hearts of all cricket fans, particularly those who love sport for its narratives, its relatable, aspirational tales of triumph over something. How can you identify with someone who can do it all while looking like he isn’t even trying?

A comparison with the other Wisden Cricketers of the Decade is instructive: Steve Smith is the chubby leggie who became the best since Bradman, Ellyse Perry the opening bowler who turned herself into the best batter in the world, transcending her sport all the while. Virat Kohli conquered his Test demons while bearing the weight of a billion hopes, and Steyn’s popping temples tell their own visceral tale. But it all seems to come too easily for de Villiers, and while purely beautiful in quite the same manner as Ian Bell or David Gower, everything he does seems effortless. It’s impossible not to admire him or be in awe of him, but for some, adoring him has been a step to far.

However, as is the case with many cursed with the blessing of grace and good timing, de Villiers could only make it look easy by working hard, and working smart; his genius isn’t in existing constantly in a zen mindset of pure reaction but in recognising that headspace as something to be actively pursued, and central to all training, no matter the discipline.

“When I’m playing at my best, I’m really still at the crease, I play the ball as late as I can, I don’t premeditate at all, I don’t think too far ahead,” he told The Nightwatchman this year. “I literally just try and hit the ball in front of me. [When practicing] I just play 10 to 20 balls where I just do that: I literally let the ball almost hit me before I just block it dead.

“I do these drills every single format, every single game I play in. It’s not about what shot I’m playing; it’s literally just seeing the ball and letting it come to me, almost allowing it to hit my stumps before I play it. Once I’ve done ten of those, I’m ready to play in any format, anywhere in the world.”

It might be why the captaincy never quite sat right, a constant needle popping de Villiers’ bubble. And yet, it also coincided with his apex, at the 2015 World Cup, when de Villiers had a campaign to rival that of Lance Kluesener in 1999 for pure untouchability – 482 runs at 96.40 with a strike rate of 144.31

Though that semi-final against New Zealand is rightly regarded as one of the greatest of all time, the end of South Africa’s innings is rarely mentioned. De Villiers was 60 off 38 balls with 12 overs to go when the rain came. His flow interrupted, he managed just five off seven in the  five overs remaining after the reduction and resumption. What could South Africa have made in another 12 overs of AB? 150? More? It remains one of the great what ifs, de Villiers’ knock a footnote in a long line of South African World Cup heartbreak.

As much as he says otherwise, a world title remains de Villiers’ Moby Dick. Though he insists that the controversy around his return during last summer’s World Cup was a friend-to-friend offer – you need me, I’ll be there – blown out of proportion, the tempting romance of the all-conquering comeback must have played a part. Ahead of next year’s T20 World Cup, his mooted return seems much more than the subject of tabloid fodder and social media debate, but a real, concrete prospect. The story of AB, the man who could do it all, might still have one final chapter yet to be written.

AB de Villiers’ 149 against West Indies at the Wanderers in 2015, No.2 on Wisden’s list of ODI innings of the decade, arguably didn’t influence the result of the match it came in one iota. Coming in in the 39th over, promoted to No.3 after a first-innings stand of 247 – de Villiers himself wanted David Miller to go in – even a mediocre finish would have propelled the Proteas far beyond the reaches of a listing West Indies. It’s a mark of de Villier’s own greatness that in such circumstances, in a settled game in a glorified World Cup warm-up, he was still able to summon something completely unforgettable.

The thin air, 6,000 feet above sea level, flat pitch, and hefty platform provided the perfect playground, and as the roar of the crowd, already in party mode for ‘Pink Day’, increased in volume, the milestones came faster and faster. The first 50 runs came in 16 balls, the fastest by anyone in ODIs, the second off 15, de Villiers’ 31-ball hundred beating the previous mark by nearly an over, and his next 45 off 12, before he fell, trying to bring up 150 from 44 balls. Pure carnage, the like of which we may never witness again, from a player capable of doing things the rest can barely even dream of.