After another day of dominance against South Africa, Rupin Kale examines the return to form of Ajinkya Rahane, who went to stumps within 17 runs of his first home Test century for three years.

Rohit Sharma continues to see the red cherry like a football; Virat Kohli looks on from the dressing room with ceaseless confidence – India have a lot to smile about after the opening day of the final Test against South Africa. It might just be Ajinkya Rahane’s performance, however, that gets them most excited.

Before the tour to West Indies two months ago, Rahane was in the worst rut of his career. He had gone without a century for two years, 17 Tests and against five different opponents. His average from August 5, 2017 to August 5, 2019 read a meagre 24.85.

Rahane’s nightmare ended in the Caribbean earlier this year, when he scored 183 runs across two innings in the first Test. The right-hander recorded his 10th Test hundred in that game, and was also adjudged Player of the Match.

Breaking the century drought has kickstarted an uptick in form. Since August, his scores read 81, 102, 24, 64*, 15, 27*, and 59, along with the unbeaten 83 against South Africa today. Five matches, three not-outs, and 455 runs at an average of 91. Praveen Amre, Rahane’s coach since childhood, believes it’s hard to overstate how vital that North Sound century was. “The West Indies innings was critical. That hundred was so important for him to gain confidence,” he tells wisden.com.

It's more than three years since he made a Test hundred at home.

“There were very few technical changes we had to make. It was more of a mental challenge, and you have to give credit to him for rising to it.”

Rahane seems to have rediscovered himself at the crease, and is not afraid to play on the front foot on Indian tracks, where the bounce is significantly lower. According to CricViz, he had never averaged more than 27.33 in a year in India when playing on the front foot, but this year, that number has shot up to 98. 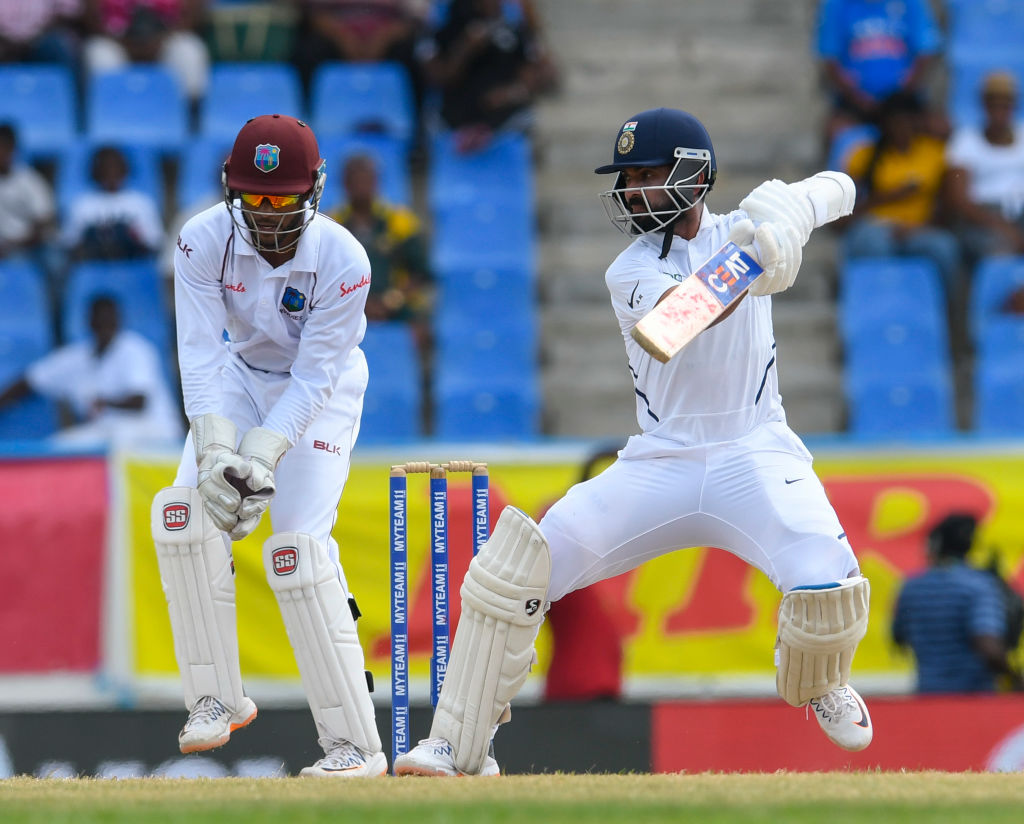 Rahane scored a crucial 102 against West Indies at North Sound

Also key with Rahane is how he starts off. His best knocks tend to take on a counter-attacking feel, at least to start, and today was no different. Coming in with India in trouble at 40-3 in 15.3 overs, his aggressive approach pushed South Africa onto the back foot. At one point, he was 40 off just 42 balls, before consolidating to finish unbeaten on 83 off 115, and, according to Amre, right from the offset, the signs were there that today would be a profitable one.

“Getting two doubles in that first over was very important. I felt his timing was perfect from the very beginning today. Coming in early helped. He used to struggle to build momentum against the soft ball as he came in after the 50th-60th over. Today he got the hard ball, and that adds value to your shots.”

Excellent passage of play for the hosts.
Rohit Sharma and Ajinkya Rahane have added 76 runs from 15 overs post lunch and are looking set for a big score.

The 100-run partnership is up for the fourth wicket.

Another factor that might’ve added to Rahane’s self-assurance is his improved batting arsenal. He has always been a strong player against seam, hence his successes overseas, but has often struggled against slower bowlers in Indian conditions: he averages 48.3 against pace at home, as opposed to 33.64 against spin. In this series, however, his average against spin has improved to 44.5.

In the summer, Rahane spoke extensively about adding sweeps – paddle and reverse – to his range of shots. While he hasn’t used these shots extensively so far – he’s gone for the sweep just seven times this year – he has specifically worked on them. Just the knowledge that he has more options, especially against the spinners, seems to have done him a world of good.

“This time, he worked on the sweep shot more than anything,” says Amre. “But then, you should always have more shots in your tank but also, you need to know when to use them. Today, it was more about the footwork than the sweeps.

“The counterattack at 40-3 was crucial. He did not let any loose balls go, his boundary conversion was superb. It was Rahane at his best.” 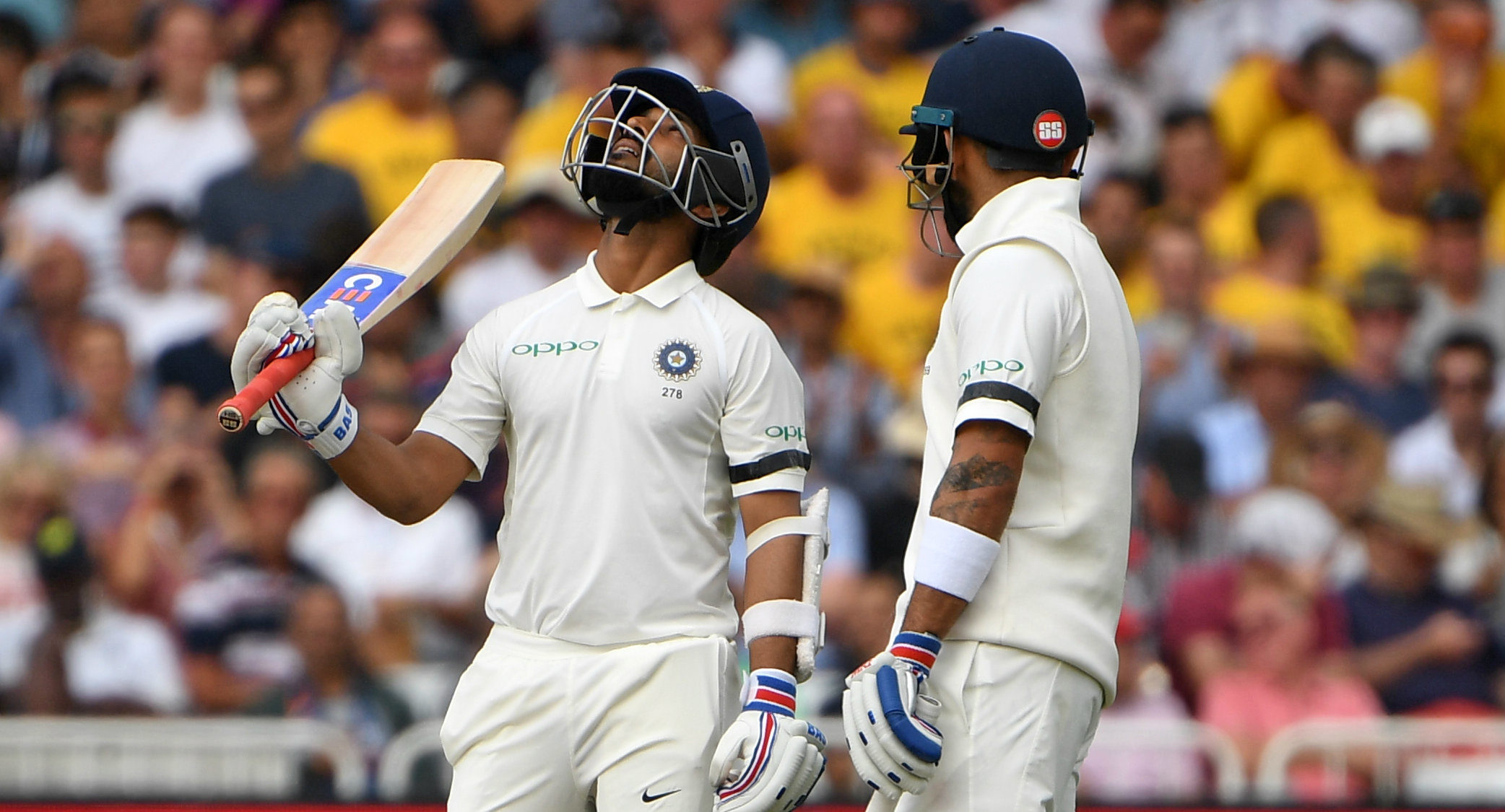 Rahane averages 91 in Tests since August

One of the major concerns in Rahane’s career so far has been him losing focus just before or immediately after an obvious milestone. He has been dismissed 12 times between 40 and 60 in Tests, but just thrice between 60 and 80, and Rahane has spoken of his struggle not to get distracted by impending landmarks.

“During these 17 Test matches [when] I was batting well but not getting hundreds, I was thinking about the century and it was going away from me,” he said before the series. “So when I went in to bat in the West Indies, I told myself that I’m not going to think about the three-figure mark, and I’m going to enjoy batting.”

It’s the marker of a player reaping the benefits of experience. “You learn by your mistakes,” says Amre. “That’s what experience gives you. He now reads the situation early and acts accordingly.”

India’s next overseas assignment is perhaps their toughest of the World Test Championship, against New Zealand, the No.2 ranked side in the world and where they haven’t won in over a decade. Rahane’s form will be crucial if India are to extend their lead at the top of the standings. If the early signs are anything to go by, the future looks promising for India and their deputy.