Cricket finally has a 3D interactive game that faithfully simulates the real thing. WCM’s editor-in-chief Phil Walker visited the games room at the Lord’s MCC Museum to try it out.

Growing up in the Eighties, cricket to me consisted pretty much exclusively of Botham, Gower, and a curious table-top knockabout called Test Match.

My version, naturally enough, was endorsed by our two heroes, complete with their mugshots on the box – Beefy draping his vast Duncan Fearnley over the shoulder, Dave leaning raffishly against his pal – and I played it for months on end, ironing out the starchy pitch, Velcro-ing the boundary markers to its edges, positioning my iconic red-capped fielders in a cluster, and finally, when all was in place (and I’d found someone to play with), rolling a ball-bearing down an angled plastic chute to a rather limited right-hander down the other end. In all my months and, yes, years of playing it, I don’t think I ever hit a shot on the leg side. Certainly not through the tiny diamond scoring area at mid-wicket that signalled a six.

CricketLive: The game that gets real

It would seem, dear reader, that the world has moved on. Visit the MCC Museum games room today and you’ll find among the dusty old boxes of Stumpz, Subbuteo, Owzat! and, yes Test Match, a supremely 21st century of my beloved old game. CricketLive is still a table- top game, and its fielders are still inanimately hunched, waiting to gobble up a chance. But thereafter, the similarities end.

The brainchild of Aditya Dayal, a US-based inventor, CricketLive replicates the trajectory and speed of real cricket. The first three- dimensional game of its kind, it’s designed on the principle that cricket is a fast game played in the air.

“We designed it to follow the realism of cricket”, Dayal says. “On our game table the ball isn’t rolling along the ground, it’s actually flying through the air. The controls allow the bowler to change line, length and speed just like in the real game. More experienced players can even spin the ball! To replicate the quickness of the game, the batsman has the same time to react as the pros. The fastest ball takes less than half a second to fly from the bowler to the batsman, equivalent to a 100mph delivery on a 22-yard cricket pitch.” 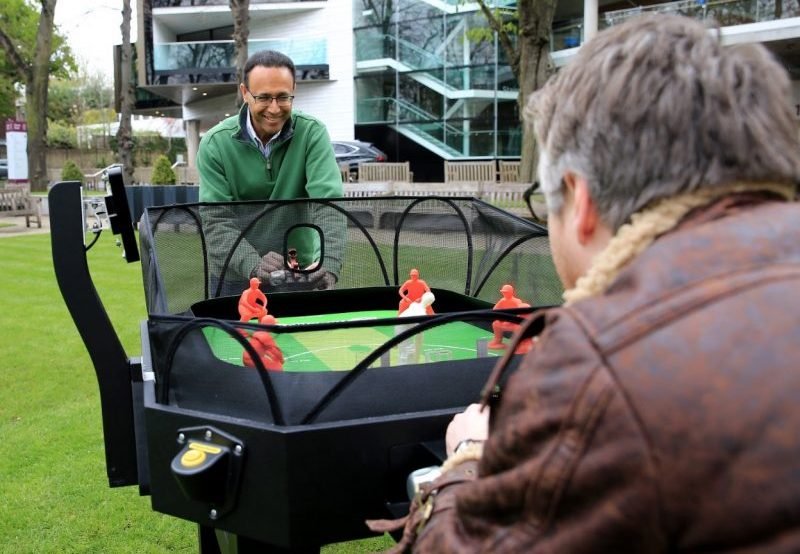 CricketLive is the brainchild of Aditya Dayal

How that delivery is propelled involves the user feeding the ball into the bowler cupped hand, lining up the direction of the bowling arm, and pulling back and releasing the figure to launch the ball.

For the batsman, the full repertoire of shots is available (OK, the reverse-paddle-lying- down has yet to be incorporated, but it’s early days…), as is access to the full arena. Runs can be scored through backward point just as effectively as wide long-on, along the ground or in the air. “And if you time the ball right,” Dayal says gleefully, “you can even hit it out of the stadium.”

The matches are recorded digitally on a scoreboard, with a hidden network of sensors and software that enable live commentary, and the ability to track scores and stats. “As a player,” Dayal adds, “you can track your batting average or strike rate, monitor your rank on the batting or bowling leaderboards or simply view the wagon wheel of your last innings.”

Needless to say, we had a match. And needless to say, Aditya beat me. But I had my moments. That pick-up shot over straight mid-wicket against his quicker ball, sailing out of the arena and onto the manicured turf of the Grace Gardens, is up there with the finest shots the ground has ever seen.