As England head off to the Caribbean for three Tests, five ODIs and three T20 Internationals, Peter Miller recalls the 13 Caribbean-born players who have turned out for England.

The list includes a one-cap wonder, unfulfilled potential, an England captain, the first black cricketer to represent England, and two tragic tales of players passing away before their time.

With Barbados-born Jofra Archer about to qualify to play for England, there could be a 14th man added to this list in 2019. 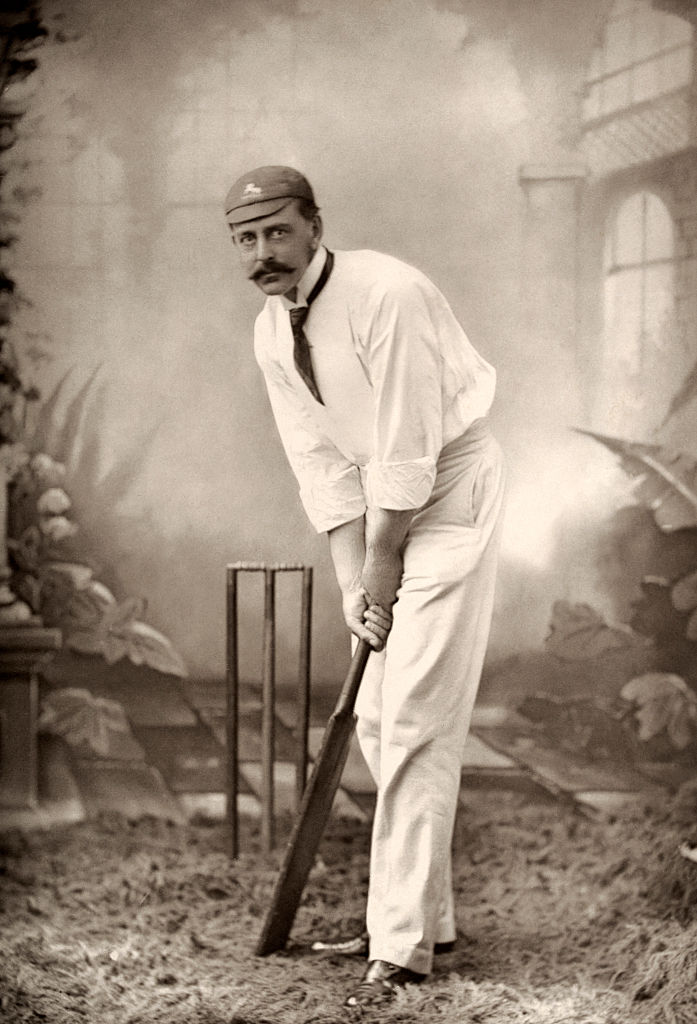 Lord Harris, captain of Kent and England, circa 1880

Colonel George Robert Canning Harris, 4th Baron Harris, was born in Trinidad while his father was the Governor of the country, but it is unlikely he had much recollection of his time there. By the time he was three-years-old his father had been reposted to India. Harris played for Kent immediately after leaving Eton in 1870 and also represented Oxford University. His first Test came in 1879, but it was only given that status retroactively. He played for England four times, including the first-ever Test in England in 1880. His first-class career lasted an incredible 42 seasons, playing his last match in 1911.

Born in Trinidad and educated in Barbados, Sir Pelham “Plum” Warner played first-class cricket for Oxford University before going on to represent Middlesex. He made his Test debut against South Africa in 1899 and was captain in 10 of his 15 Tests, including when England regained the Ashes in 1903/4. Warner was a Wisden Cricketer of the Year in 1904 and 1921, making him one of only two players, along with Jack Hobbs, to have been given the honour twice. 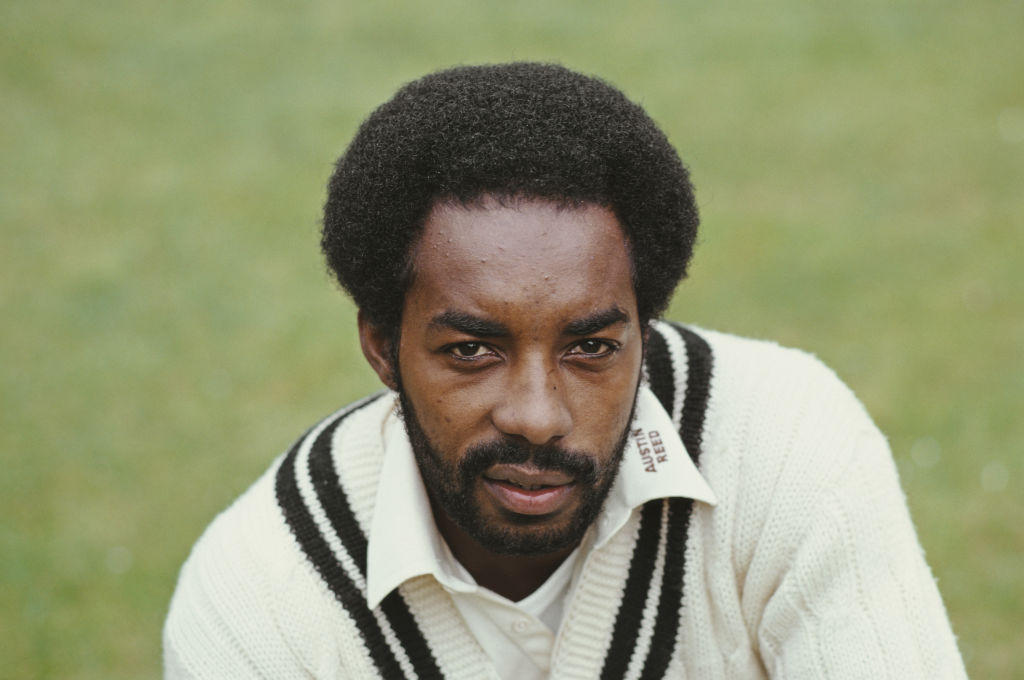 Butcher came to England as a 13-year-old and played for Middlesex between 1974 and 1990. Known for his attacking batting in the middle order, Butcher became the first black player to represent England. His international career was a short one, though, featuring just six times between 1980 and 1981. He moved into coaching at the end of his career, and became Director of Sport of the Cave Hill Campus of the University of West Indies in his native Barbados.

England’s 500th Test-match cap went to Norman Cowans, a Jamaican born quick who played for Middlesex and Hampshire in the 1980s. Nicknamed “Flash” due to his ability to bowl with menacing speed, he wasn’t always accurate but he entertained the crowds. The high point of his international career was the match-winning 6-77 in the Boxing Day Test at the MCG in 1983. His was also Richard Hadlee’s 200th Test scalp. 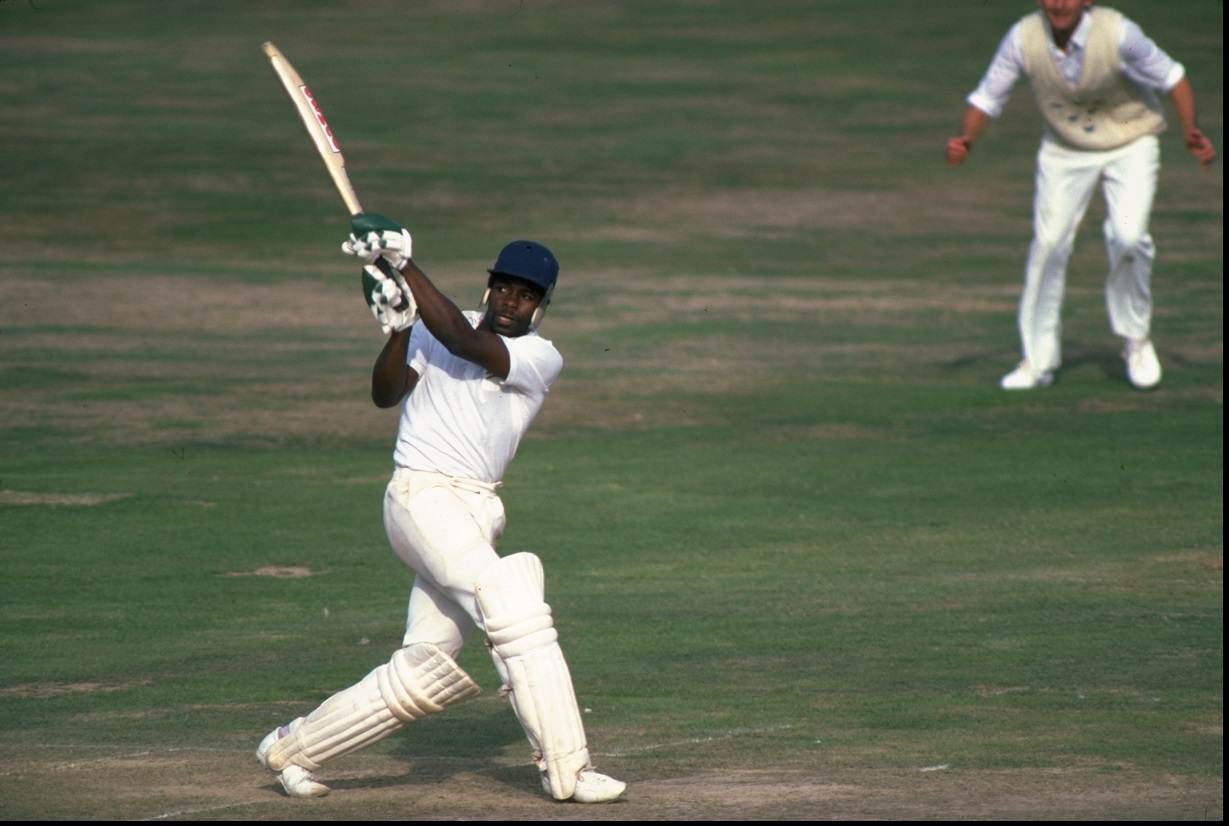 Wilf Slack played for Middlesex from 1977 to 1988 and appeared for England five times in 1986. Two of his three Tests came in the Caribbean where he was a late replacement for Mike Gatting. He failed in the first of those appearances and was dropped for the next two matches before returning for the final Test of the tour and making 52 while opening the batting with Graham Gooch. Slack also played for his native Windward Islands between 1981 and 1983. The batsman suffered from blackouts while playing cricket with no cause ever found. Tragically, he collapsed and died while playing in The Gambia in 1988 at the age of 34.

Of all the players on this list the man who played the most for England was Phil “Daffy” DeFreitas. He played for Leicestershire, Lancashire and Derbyshire in a county career that lasted 20 seasons. He made his Test debut for England on the Ashes tour of 1986/87 and was an England regular for more than a decade. His two most fruitful series in Test cricket came away from home: 22 wickets in the West Indies in 1990/91 and 21 scalps in New Zealand in 1993/94. He was also part of England’s World Cup squads in 1987, 1992 and 1996. 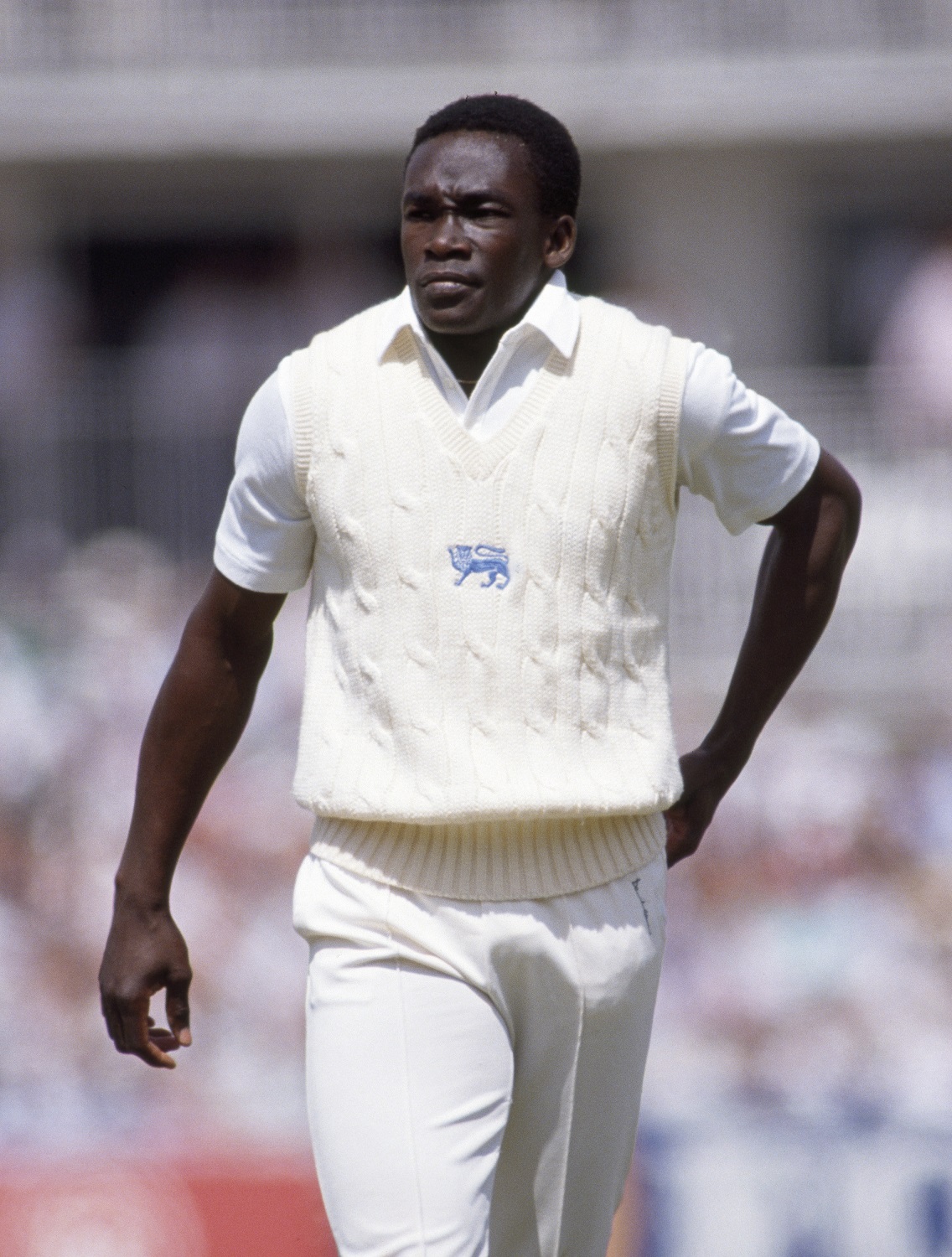 Gladstone Small during the second ODI between England and New Zealand, the Oval, 1990

Gladstone Small arrived in England as a teenager and went on to be a big part of Warwickshire’s success in the early 1990s, including the all-conquering team of 1994. He made his England debut in 1986 and went on to play in both the 1987 and 1992 World Cups for his adopted country. He later became the director of the Professional Cricketers’ Association.

Monte Lynch arrived in the UK as a child and went on to play three ODIs against the West Indies in 1988. He played county cricket for Gloucestershire and Surrey from 1977 to 1998 and also played one season for his native Guyana. With more than 18,000 first-class runs and 8,000 List A runs, plus the the ability to turn his arm over to good effect, he was perhaps unlucky to not get more games for England, but he didn’t make the most of his chance, with just eight runs in three matches. 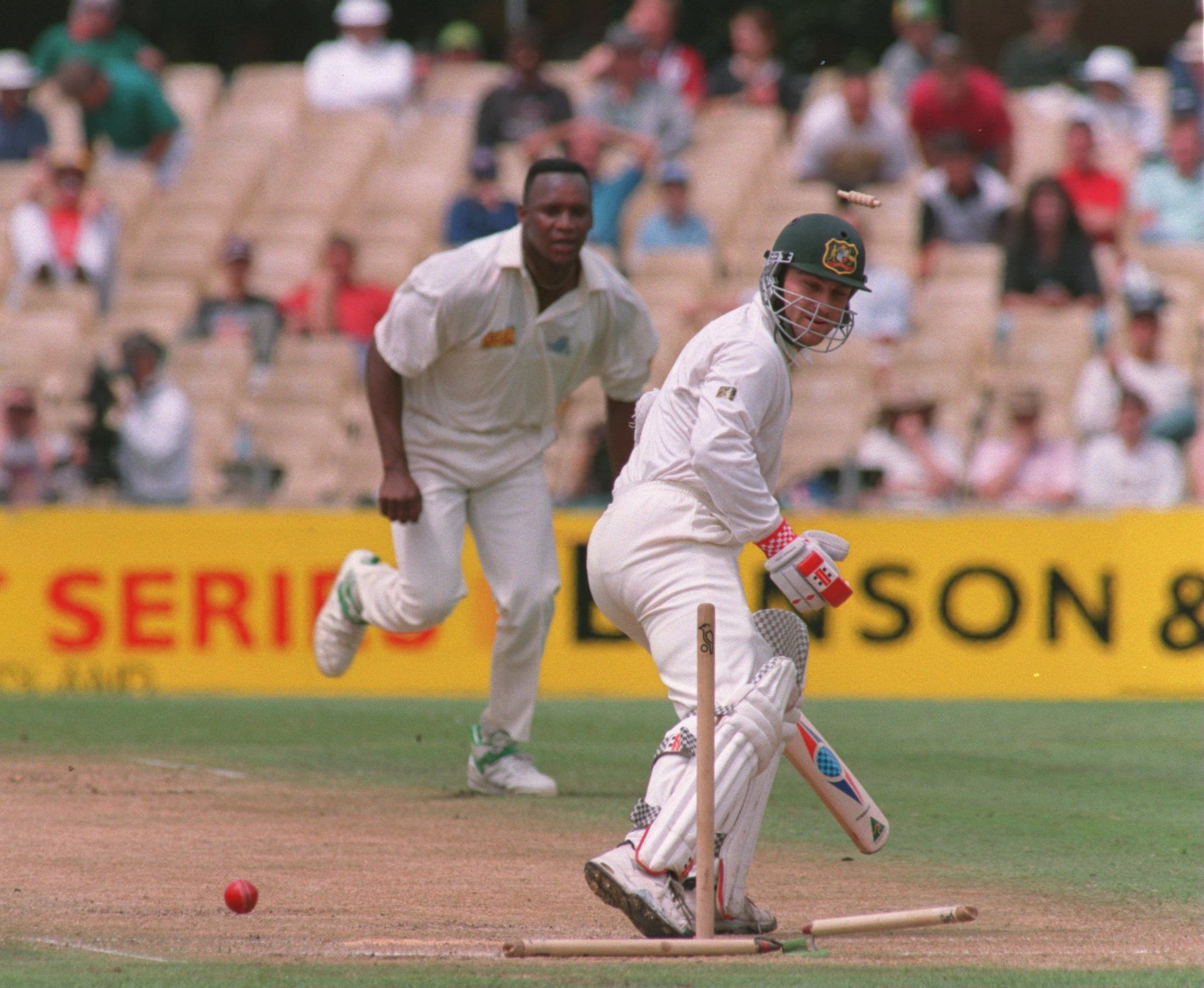 Capable of searing pace – and spraying it all over the place – Devon Malcolm was one of the more mercurial talents in English cricket in the 1990s. Malcolm made his Derbyshire debut in 1984 and qualified for England three years later, but it wasn’t until the 1989 Ashes that he made his international bow. Malcolm’s game clicked into place when he claimed 9-57 against South Africa at the Oval in 1994.

Chris Lewis has had a roller-coaster life on and off the field. Ridiculously talented, capable of turning matches on his own, a fine bowler, an athletic fielder and an attacking batsman, Lewis should have had a great international career. As it was, apart from some fine performances in the 1992 World Cup, Lewis never truly realised that potential. In 2008, at the age of 40, Lewis returned to professional cricket on a “Pay as you Play” T20 contract with Surrey after eight years away from the game, which perhaps suggested he found his niche too late in life. Things fell apart dramatically when he was arrested for cocaine smuggling in December 2008. 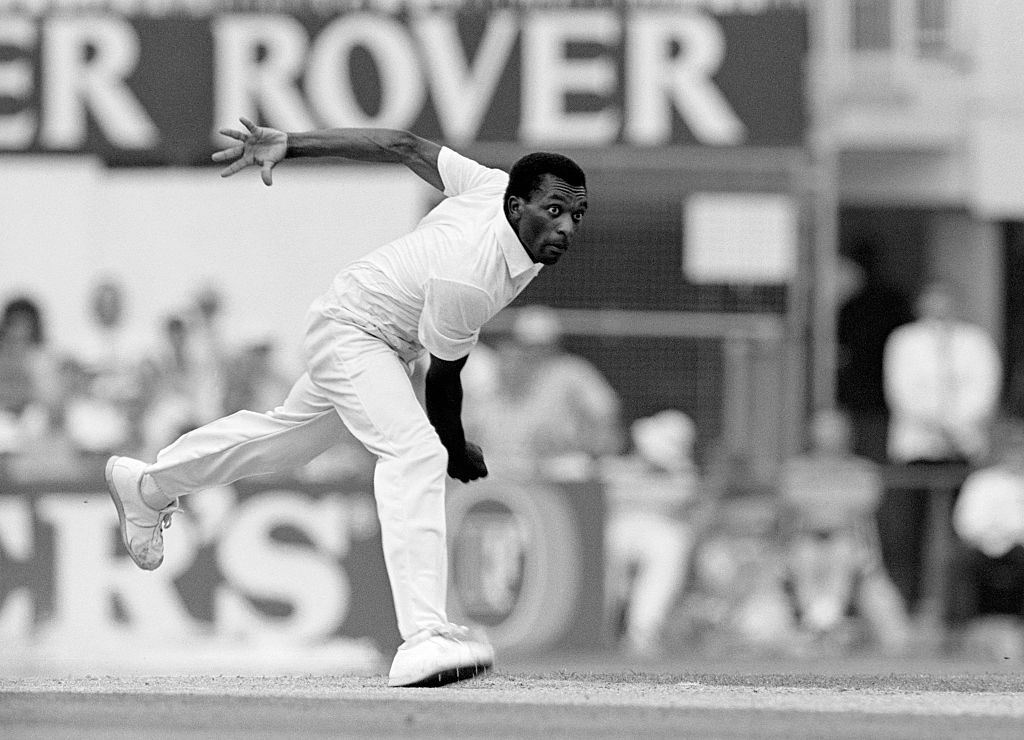 Neil Williams bowling for England during the third Test between England and India, August 1990

Neil Williams replaced Chris Lewis when he played his one and only Test match, against India at the Oval at the end of the summer of 1990, after the all-rounder pulled out with a migraine. Williams was hastily called up and took the wickets of Sachin Tendulkar and Mohammad Azharuddin, and also scored 38 as nightwatchman. He never got the chance to turn out for England again, however. He played for the Windward Islands for three seasons in the 1980s before retiring to St Vincent where he suffered a stroke at the age of 42. He passed away three weeks later.

A reliable rather than spectacular bowler for Surrey, Benjamin earned a Test call-up on the back of his best-ever county season in 1994, when he claimed 80 wickets at an average of 20.72. He took four wickets in his only Test – the same match where Devon Malcolm took 9-57 – and it was enough to earn him a tour to Australia that winter, where he played in his only two ODIs. A difficult relationship with then England coach Raymond Illingworth dented his chances of further appearances. 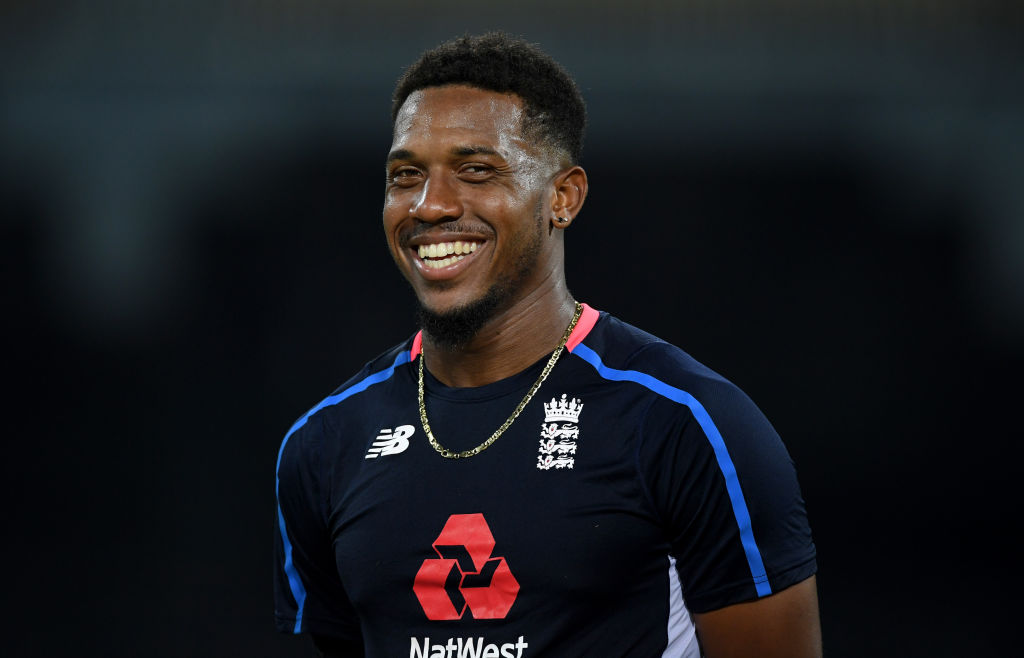 The most recent addition to the list of Caribbean-born England players is Chris Jordan, who was born in Barbados but came to England when he won a scholarship to Dulwich College. Now a mainstay of England’s T20I team, Jordan has also played eight Tests but is currently utilised as a white-ball specialist at international level. Jordan is also capable of some brutal lower-order batting and is one of the best fielders in the game.