Rob Smyth finds something comforting in the recurring nightmare of an England batting collapse.

A study by Harvard University and Google in 2010 suggested that there were 1,022,000 words in the English language. Sometimes all 1,022,000 are redundant, as a look can convey something more powerfully than even the most eloquent tongue. I am in love with you; I am in hate with you; I am truly sorry; and have you seen the bloody England score?

You could make a great silent movie out of reactions to an England batting collapse. All it would require is a series of variations on one basic look. It’s a look English cricket fans know intimately, pitched somewhere between exasperation and hilarity – or, in this acronymous age, between FFS and LOL. Watching England lose five wickets for eight runs to some wobbly dobber is such a perfect introduction to life’s vicissitudes that they should stick it on the curriculum. 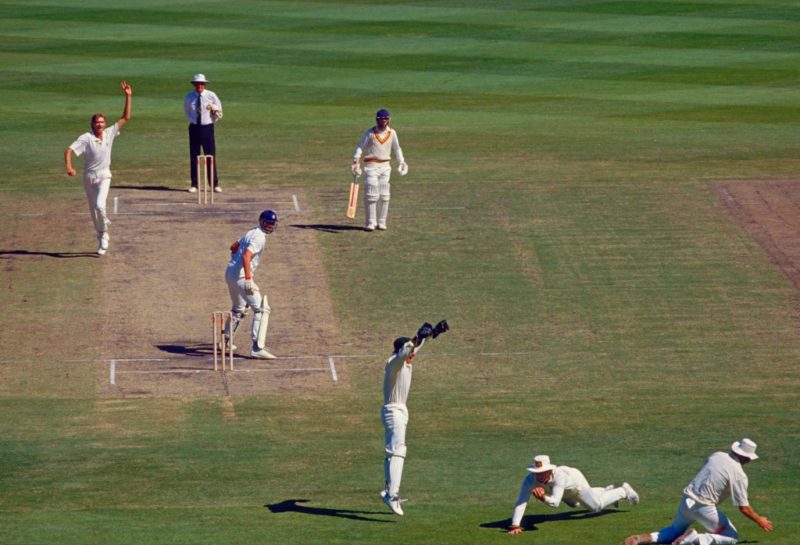 For those who grew up in the 1980s and ’90s, adolescence was a relentless trial of beavering self-doubt, crushing insecurity and England batting collapses. At least the latter offered a little levity. Even now, the sight of England’s middle order disappearing in a hurry leaves grown adults tittering at the back. It would be difficult to explain to sports fans in most other countries; in England, however, gallows humour and self-deprecation have always been vital comedic devices. It’s not quite self-schadenfreude, as that’s an oxymoron, but it’s as close as you can get. It’s not that we don’t want England to win; quite the contrary. But if you can’t laugh at your own team, who can you laugh at?

Everyone has a favourite collapse. It might be Melbourne 1990, when England slipped from 103 for 1 and 147 for 4 to 150 all out, surrendering another Ashes series faster than you could say “squeaky-Pom time”. Or Headingley 1992, when 270 for 1 and 292 for 2 became 320 all out in a mesmeric blur of reverse swing from Waqar Younis, and England’s numbers  six to 11 scored a gloriously pathetic two runs between them. Or the 1979 World Cup final, when the middle order went roaming in the gloaming against Joel Garner and lost their last eight wickets for 11.

It is one of life’s more perverse pleasures, a dry celebration of your own hopes being crushed in the comedy style

Generally, sport is far too important for such a reaction, especially in the 21st century, although there are hints of a similar culture in Scottish football and English tennis. Yet even they do not quite compare to an England batting collapse, which has an exquisite pain all of its own.

It is one of life’s more perverse pleasures, a dry celebration of your own hopes being crushed in the comedy style. It’s also one of life’s great shared experiences – the guilty pleasure it’s OK to admit, because everyone else is at it. Maybe there’s an element of the support group too: a shambles shared is a shambles halved. You certainly need some coping mechanism. At times it feels like some corner of a foreign field is forever hosting an England batting collapse.

One corner in particular will always be associated with this particular sub-genre of failure: Adelaide. After Shane Warne’s awesome heist in 2006, the entire extended English cricket family was left with a million-yard stare. Occasionally these collapses are too traumatic for even wry amusement. At Barbados in 1990, when a heroic rearguard from Robin Smith and Jack Russell, two of cricket’s most likeable characters, was ended by Curtly Ambrose’s first great wrecking spree, Wisden Cricket Monthly said it “brought a lump to the throat”. 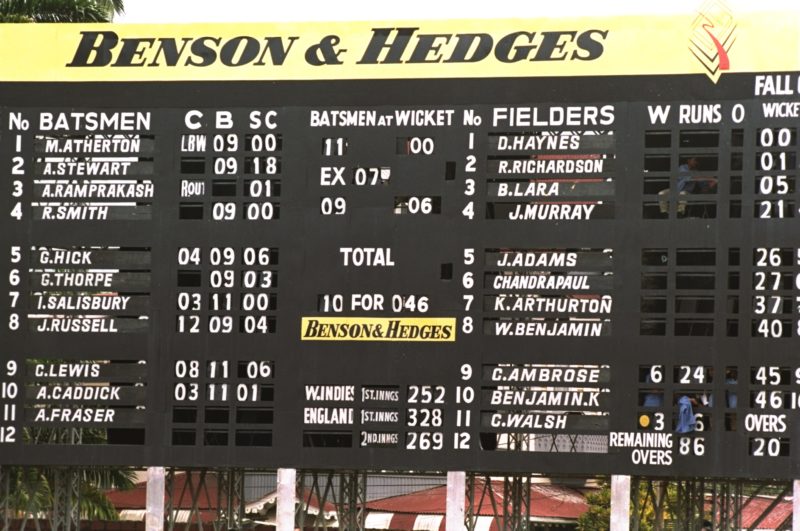 30 Mar 1994: The scoreboard shows England are bowled out for 46 against the West Indies

While many of England’s collapses have been to mediocre spinners or workaday seamers, a few have been the consequence of greatness in the opposition – a greatness that cricket’s two-eyed nature allows us to appreciate, even if it’s only with hindsight. Warne; Ambrose; Ambrose again when England were obliterated for 46; Glenn Effing McGrath, to give him his full name. And of course Pakistan, who script more English collapses per head than any other country. The summer of 1992 will forever be the summer of the English collapse, when Waqar, Wasim Akram and Mushtaq Ahmed regularly ensured the tail started at number four or five.

When England exhibited a remorseless excellence in 2010–11 – with a couple of collapses for the road at Perth and Trent Bridge, of course – it was genuinely unsettling. If we hadn’t seen such poverty we could live with being rich. Then, on the first morning of the first Test against Pakistan in 2012, England’s first as No.1 in the world, they collapsed to 43 for 5. The world was back on its axis and three of those 1,022,000 words in the English language – England, batting and collapse – were back where they belonged. Together.

This article was first published in issue 1 of The Nightwatchman in 2013. Buy a hard copy of this article today or get £5 off the 2018 Collection (issues 21-24) with coupon code WCM7.