It may be time for a reinvigorated Adil Rashid to shuffle onto centre stage once and for all.

Abdul Rashid was just a boy when, in 1967, his father took the family from Pakistan to Halifax to start work in a local textile mill. In due course, Abdul himself would follow Rashid Snr into the business. But when the time came to consider options for his own sons, Abdul had bigger plans.

A keen club player, Abdul pushed them towards cricket. He set up coaching devices to be used around the house, the favourite being a tennis ball on a rope attached to the ceiling of the basement to be whacked in perpetuity. At 18 yards’ length, the basement itself wasn’t quite long enough to bowl properly. Still, it would have to do.

He was 18; when he took six wickets in the second innings to win the game, the English game went a little berserk

Living in this cricket factory, all his boys would show promise. But it was Abdul’s third son, Adil, rolling a taped-up tennis ball over his fingers around West Bradford’s backstreets and, occasionally, even the local cricket ground, who would shine the brightest.

Playing against his elder brothers, the formative standard was high, and the progress precocious. At 13, Adil took all 10 wickets in an adult league match for Bradford & Bingley against Gomersal. Spying a good story, Bradford Council duly flew the legendary Pakistani leggie Abdul Qadir over from Lahore to conduct a few one-to-one coaching sessions.

A kind of local celebrity befell the boy. Five years later, Adil Rashid would become just the third Yorkshire-born Asian cricketer to play for the county. 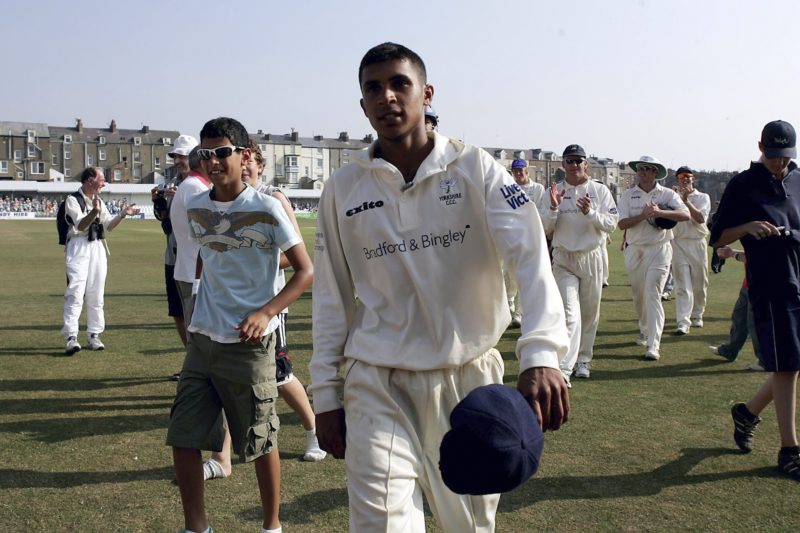 Rashid’s debut match came in late July 2006 against Warwickshire at Scarborough. He was 18; when he took six wickets in the second innings to win the game, the English game went a little berserk.

He was 21 and still developing emotionally as much as technically when England summoned him for his ODI debut in 2009. He played five ODIs that autumn, took three wickets, and was discarded for the next six years.

This is how we’ve tended to treat our leg-spinners.

The isolation years were hardly unfruitful, as Rashid set about building the numbers – first-class figures that now read 500 wickets, not to mention 10 centuries – to make the case.

In 2015 he was brought back in to an ODI side in dire need of something different. And as we know, since his return, he’s slowly but emphatically become the lynchpin of their attack. A spinner, a leg-spinner, who marries control with threat, adding bite in those middle overs where his team traditionally goes limp. He is the most successful slow bowler in England’s 50-over history.

Next to this, almost as an aside, he has been offered 15 Tests in three years, in which he’s taken 48 wickets. In his longest single run of seven Tests across the 2016 winter – two against Bangladesh and five against India – he took 30 wickets. In the India series itself, he took 23; the next best English bowler was Moeen, with 10. They weren’t cheap, those wickets; but at least they happened.

After that tour, Rashid was not seen in Test whites for the best part of two years.

“If a leg-spin bowler in England has a bad day,” he told me in 2017, having been overlooked for the first few Tests of that year, “it’s such a big deal. But generally in cricket, a player has more bad days than good – that’s cricket.

“A leg-spinner needs the backing of his captain, that belief that it doesn’t matter how many runs you go for, just look to spin the ball and get the wickets. There’s not enough of that, there’s too much of… ‘You’ve got to keep it tight’.

“As a leg-spinner, if you stop trying to spin the ball, you end up bowling darts. You should be encouraged to spin the ball and not be scared to be hit for runs. It’s a risk, spin; but it’s a risk you take.”

Rashid’s Test return last season, fronting England’s summer of risk, was as stirring as it was surprising. Seemingly the call had come after another ODI showing, this time against India and featuring the clean-bowling of Virat Kohli. But it was actually hatched beforehand, by a new national selector whose distaste for past missteps and personality clashes – and his preparedness to overlook Rashid’s decision to not play red-ball cricket that summer for Yorkshire – would transfer to Joe Root, the captain who’d felt he could do without Rashid up till then.

Those five Tests last summer were neither here nor there, but he took 10 wickets (actually from four matches, as he barely touched the ball at Lord’s), nicking off Kohli on day one from Trent Bridge and finishing the summer with two big wickets to stall India’s rampant run-chase at the Oval. 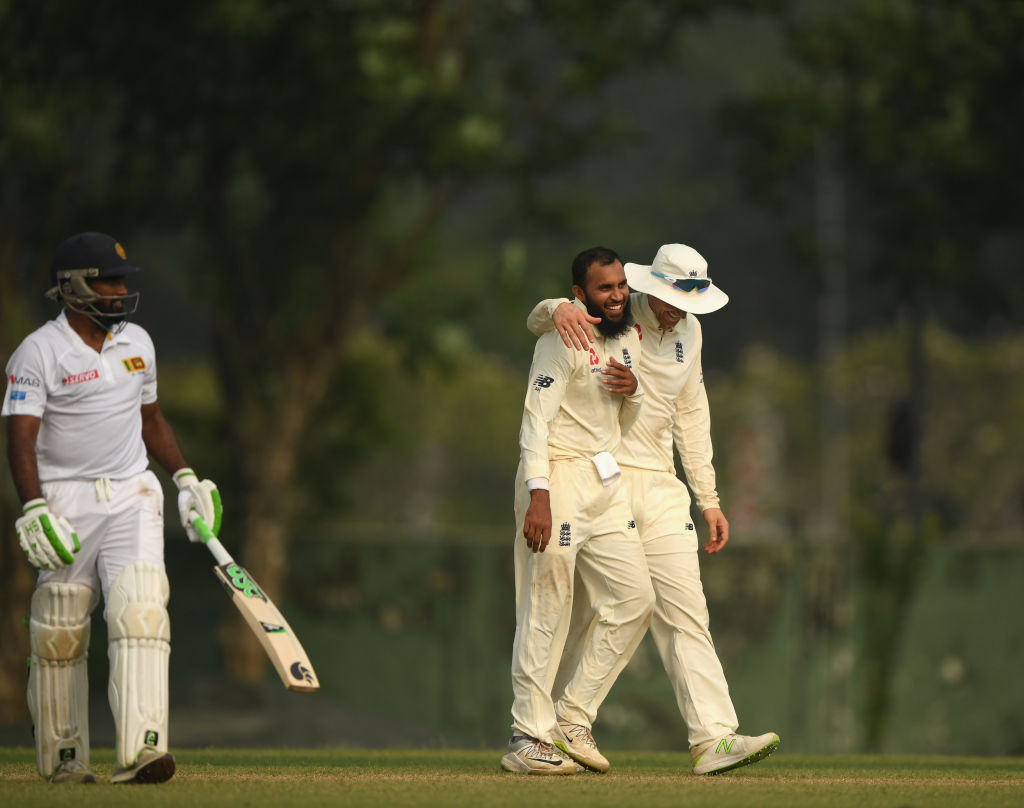 Rashid now seems to have the backing of Joe Root

The ball to remove KL Rahul, ragging square out of the rough to take the centurion’s off bail and put an end to 348 minutes of dominance, was his most telling contribution in a Test shirt to date.

Comparing Rashid to other contemporary Test leg-spinners is tricky not least because there aren’t many going around, which in itself shows what he’s up against. Yasir Shah is one, and, at a push, Imran Tahir another.

The latter, though, was a busted flush at Test level, neutered by the safety-first nature of five days to play the last of his 20 Tests in 2015. Tahir took just 57 wickets, but while Rashid’s record is better – there are seven four-wicket matches to Tahir’s three, and from five fewer games – there’s not a huge difference in the bottom-line figures.

Yasir, however, has claimed 173 wickets from 30 matches, albeit on generally receptive pitches. Rashid bowls a touch slower than Yasir, and indeed the average leg-spinner, but has quickened up a tad each year in international cricket, which suggests a determination to inject more energy into his bowling, impart more action on the ball. His stock leg-spinner – as opposed to the ever-dangerous and rather beautiful googly – has too-often felt passive.

Where the two differ is in economy rates. Rashid is more expensive than Yasir. He has a worse dot percentage and a worse boundary percentage; according to CricViz, 23.8 per cent of Rashid’s deliveries are wide. For Yasir, the number is just 8.4 per cent.

The Bosanquet of Bradford has arrived. Can he stay for good?

In previous eras, such numbers would have seen him cast aside. But this team begs to be seen differently. A top-class seam attack bowling dry frees up space for slow bowlers to tinker and dare and drag a few down. In modern Test cricket, give us 3-94 in 18 overs any day of the week. Shots will be played.

So it may be time for Rashid to shuffle onto centre stage once and for all. His personal situation with Yorkshire, who were distinctly peeved at his red-ball absence last season, has now been sorted. He was brilliant, and googly-heavy, in the recent ODIs against Sri Lanka. He’s got the possibility of six Tests on turning tracks this winter, and comes into them as a successful England player in his own right, whatever happens from now.

I once saw him physically manoeuvred into a chair to mumble a few barely-discernible quotes to a bunch of journalists (“Go on, Rash, mate, just a couple of minutes…”), and this was after he’d bowled out Australia. These days he walks differently, talks differently. The Bosanquet of Bradford has arrived. Can he stay for good?