Having been granted their first Boxing Day Test for more than 30 years, New Zealanders are desperate for Kane Williamson’s side to land some blows. Jo Harman explores a complicated sibling rivalry.

Whitney, a famously awful batsman, survived 18 deliveries in all, thwarting Hadlee’s search for the wicket that would make him the most prolific Test bowler of all time, having earlier dismissed Tony Dodemaide to draw level with Ian Botham. (Kiwi fans might also recall a huge lbw appeal from Danny Morrison against Craig McDermott in the penultimate over of the match, which left umpire Dick French unmoved.)

Since that classic encounter in 1987, six countries have been invited to fill the primetime slot in the Australian cricketing calendar: England (on eight occasions), India (seven), West Indies (five), South Africa (five), Pakistan (three, plus another Test at the MCG played in mid-January) and Sri Lanka (twice). Meanwhile, their ‘friends across the ditch’ have been waiting by the phone for a call that never came. Until now.

Come Boxing Day 2019, the long wait will finally be over, with 16,000 New Zealand residents having bought tickets for day one at the MCG, dreaming of what would be just a fourth Test win on Aussie soil.

“It’s been frustrating as hell, to be honest,” says Paul Ford, co-founder of The Beige Brigade, the New Zealand supporters’ group. “Obviously we don’t see the backroom machinations behind the scheduling decisions but we’ve had a very competitive Test team for a few years, and yet Australia hardly ever deign to play us.

“It’s been a ridiculously long time between drinks breaks at the MCG. It’s nice to have earned the right. It’s hard to remember a game in living memory with this degree of anticipation.” 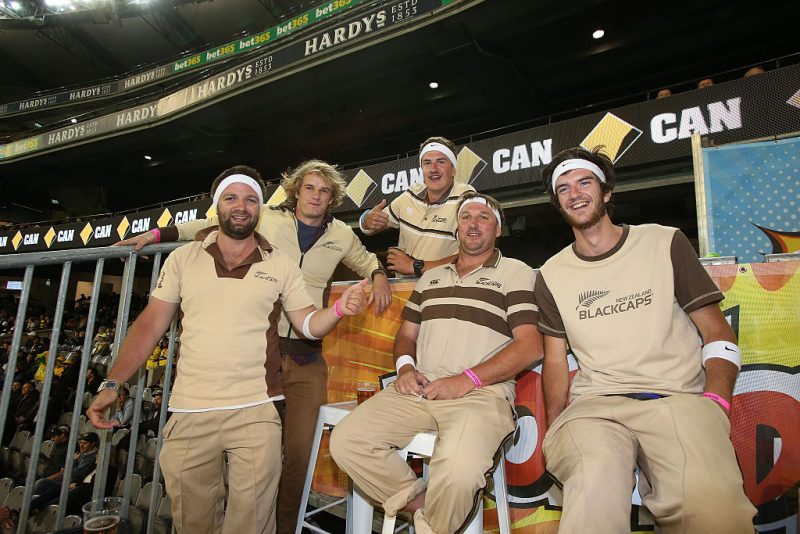 The Beige Brigade at the Melbourne Cricket Ground in 2016. An ODI rather than a Test, naturally

So why the long wait? Australia’s reluctance to play New Zealand, wherever the venue, stretches back as far as the two countries have been putting out teams. The Kiwis became a Test nation in 1927 but had to wait 20 years to play their first match against Australia. When it finally arrived, it was a humiliation: New Zealand bowled out for 42 and 54 in a one-off Test at Wellington, losing by an innings and plenty in a match which lasted one-and-a-half days.

The Kiwis didn’t get another crack at their neighbours until Australia hosted a three-Test series in 1973/74, with the hosts winning the first and third matches by an innings but New Zealand having the better of a draw at Sydney in the second.

Even as New Zealand made dramatic improvements in the 80s – winning back-to-backs series against Australia in 1985/86, including the famous Richard Hadlee-inspired win on Aussie soil – Test series between the two sides remained relatively rare. And that trend has continued, with only 11 Test matches played between the two sides in this decade. (By contrast, Australia and England have played 30.)

Ian Smith, who kept wicket for New Zealand in that ’87 Boxing Day Test, has pointed out that the All Blacks have played more rugby matches at the Melbourne Cricket Ground than the Black Caps have played Test matches. 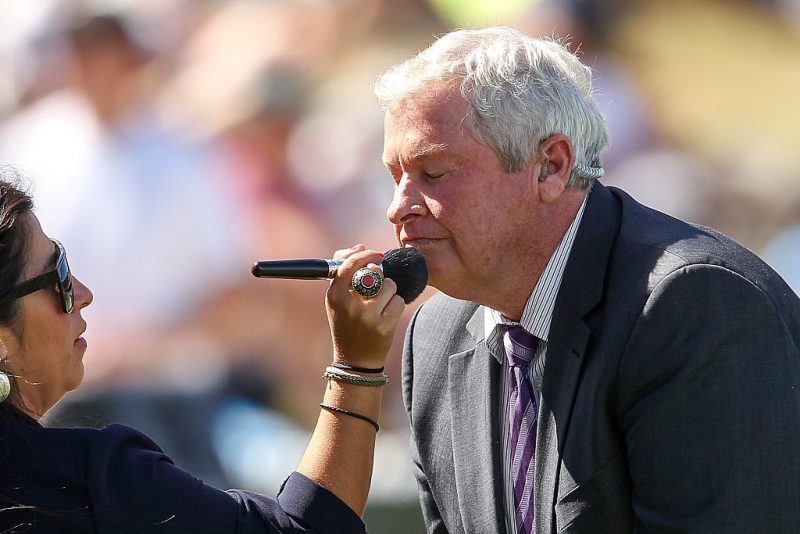 While New Zealand’s Test record against Australia remains poor, the argument that Trans-Tasman clashes are a mismatch has long since worn thin. Kane Williamson’s side currently sit second in the Test rankings, three places ahead of Australia, and have lost just one of their last 10 series, winning eight. But long-held perceptions have been tough to shake off.

“New Zealand, Sri Lanka, Pakistan and Bangladesh have been playing each other in an endless round of Test series, while we watch India, Australia, England and South Africa play each other,” says Murray Edmond, an Auckland-based poet and playwright, and lifelong cricket follower. “This of course is less about Australia/New Zealand relations than about the pan-global commercial enterprise of cricket business. It’s about brand recognition and market perception. And, once again, New Zealand has been excluded from the Australian cricket machine.

“The basic relationship between Australia and New Zealand has been compared to an older brother refusing to take the young brother seriously. But, actually, I suspect that the relationship is of an older brother deriding a younger sister. In terms of gender politics, New Zealand cricket is basically for girls, which is why Shane Warne wrote in his autobiography No Spin: ‘I’ve read that we should play the New Zealand way. No we shouldn’t’.”

“It’s a classic big brother/little brother, love/hate situation,” adds Ford, who’s been busy sending out beige clobber to Kiwi supporters ahead of the big day. “We love to have a few beers, and a lot of laughs, and we obviously have a lot in common. But they also like to beat us up, and on the flipside we are relatively sensitive and want to impress them, to prove that we’re tougher and better than they give us credit for.”

Adam Collins, Wisden Cricket Monthly’s Australia correspondent, believes the Aussie perspective of the rivalry is influenced by which part of the country you’re from. “Coming from Victoria, an Aussie Rules state, we don’t traditionally have a huge amount of animosity towards New Zealand. Friends of mine from Sydney talk about New Zealand very differently, and I’m convinced that’s due to the fact that in rugby New Zealand have dominated Australia for the vast majority of my lifetime. I think there is a distinction between how those who follow the rugby codes and how those people from Aussie Rules states understand New Zealand. In Victoria they’ve been less front of mind.”

In recent years, the rivalry has predominantly been built around white-ball cricket, with the Chappell-Hadlee Trophy, which had run from 2004 to 2010 before slipping away from the international calendar, reinstated as a regular bilateral series after New Zealand insisted on its return as part of a deal which saw the Black Caps play the first ever day-night Test at Adelaide in 2015. 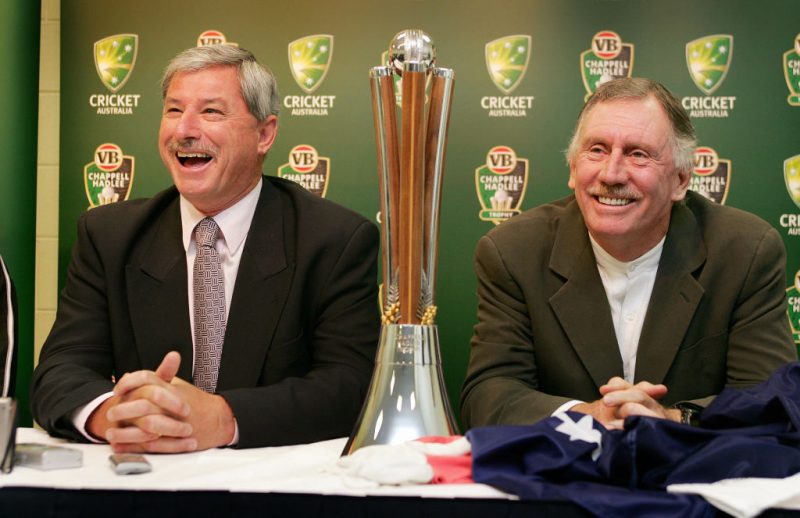 In recent years, New Zealand and Australia have largely contested for the Chappell-Hadlee Trophy in white-ball cricket

“There was a commercial deal struck,” says Collins. “Cricket Australia said to New Zealand Cricket, ‘If you want to play us more, that’s fine. You be the guinea pigs for the first day-night Test’.”

New Zealand have won two of their last three bilateral ODI series against Australia and Collins picks out the Black Caps’ group-stage victory at the 2015 World Cup – a thrilling one-wicket win at Eden Park, sealed with a straight six by Kane Williamson – as another landmark in the relationship between the two teams.

“There’s been a perception of New Zealand being off-Broadway,” says Collins, “that they don’t have what it takes to play against the big brother on the big stage on the big days in the calendar. That endured probably until the 2015 World Cup when New Zealand beat Australia in one of the most exciting limited-overs internationals ever played.”

Australia had their revenge in the final but the manner in which New Zealand played under Brendon McCullum’s unflinching captaincy during that tournament left its mark. The Black Caps are now a slightly different beast under the more pragmatic Williamson, but perhaps even harder to play. 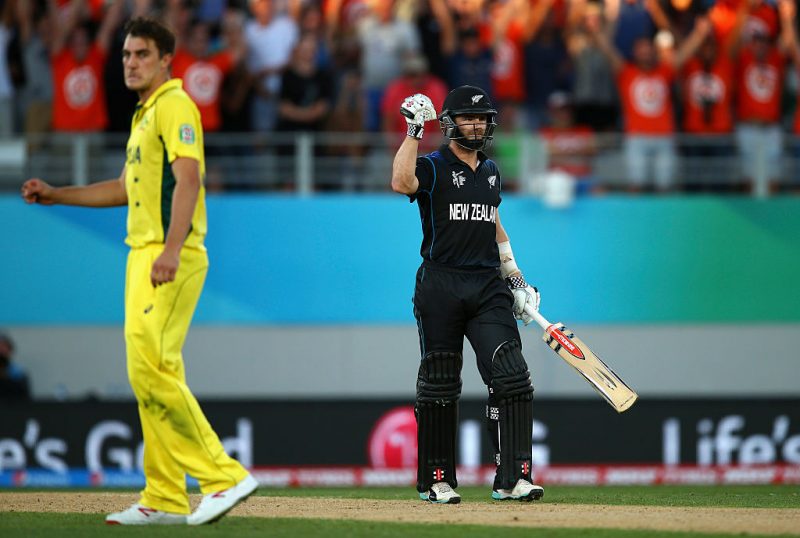 “When I was captain we needed to get back to what was important about playing the game,” said McCullum shortly after his international retirement in 2016. “But it wasn’t overly professional! My captaincy always had a shelf-life. But now that our soul’s back, Kane will bring about that level of professionalism. He knows how to bring a team together.”

It’s proven an accurate forecast. A 2016 study by the Australia-Indonesia council showed a third of Australians didn’t even name New Zealand as a regional neighbour, but on the cricket field they have become impossible to ignore.

A series of quietly impressive Test victories, at home and overseas, should probably have been supplemented by at least half a World Cup trophy in their cabinet, and the familiar trope that the Kiwis are ‘better than the sum of their parts’ is misleading when you consider five of their batsmen feature in the top 17 in the world and their three leading quicks sit at No.3, No.10 and No.14 in the bowling rankings. By any measure, this is a strong outfit.

In the first Test at Perth they didn’t really show it, losing by 296 runs after their batsmen came unstuck against Mitchell Starc on a pacy deck. If recent matches are anything to go by, the Melbourne pitch will be a good deal slower, possibly suiting the tourists’ more attritional style of play.

“Put simply, we think Australia are an arrogant, entitled, unsporting and often-disrespectful team”

For Ford and the Beige Brigade, and all the Kiwis who’ve waited for their team to have the chance to show they deserve the platform of a Boxing Day Test, the opportunity to bloody the nose of their neighbours can’t come quick enough.

“There is definitely an intensity that sits just below the surface,” says Ford. “Put simply, we think Australia are an arrogant, entitled, unsporting and often-disrespectful team. And, in relation to the Black Caps, you could throw in a heavy dose of patronising behaviour too. That Australian cricketing persona jars enormously with what New Zealanders genuinely revere: we like the winning but we’d prefer our heroes to be humble, team-first and respectful.

“This New Zealand team know that beating Australia in the ‘Lucky Country’ will command respect from the cricketing world. It will also ensure that this group can stand tall among the three New Zealand teams that have managed to pull off that coup in the past 46 years.”