Long renowned for his uncanny ability to retain composure in the tensest situations, former India captain MS Dhoni said that he, too, is human and feels angry at times, but put his incredible success as a leader down to his ability to manage those emotions better than others might in similar situations.

Dhoni has been India’s most successful captain across formats, leading the team to World Cup wins in both the limited-overs formats, and a Champions Trophy win in 2013, in addition to taking them to the top of the Test rankings in 2009. All through, he has displayed the ability to absorb pressure like a sponge and to think clearly under pressure, which has often enabled him to take important, match-defining decisions on the fly.

Related Story: ‘Be careful what you wish for’ – Nasser warns critics against pushing Dhoni into retirement

Making his first commercial appearance since India lost the 2019 World Cup semi-final to New Zealand, Dhoni was quoted as saying by PTI: “I am like everyone else, but I control my emotions better than some of the other individuals. I would say I feel equally frustrated. I also feel angry at times, disappointed. But what is important is that none of these feelings are constructive.

“What needs to be done right now is more important than any of these emotions. What is the next thing I can plan? Who is the next individual whom I can use? Once I get into it, I am controlling my emotions in a much better way.”

After stumbling in the semifinal of the 50-over World Cup earlier this year, India now have their sights set on the T20 World Cup that takes place next year in Australia. Dhoni was the captain when India won the inaugural edition of the shortest format’s flagship event, in 2007 in South Africa. 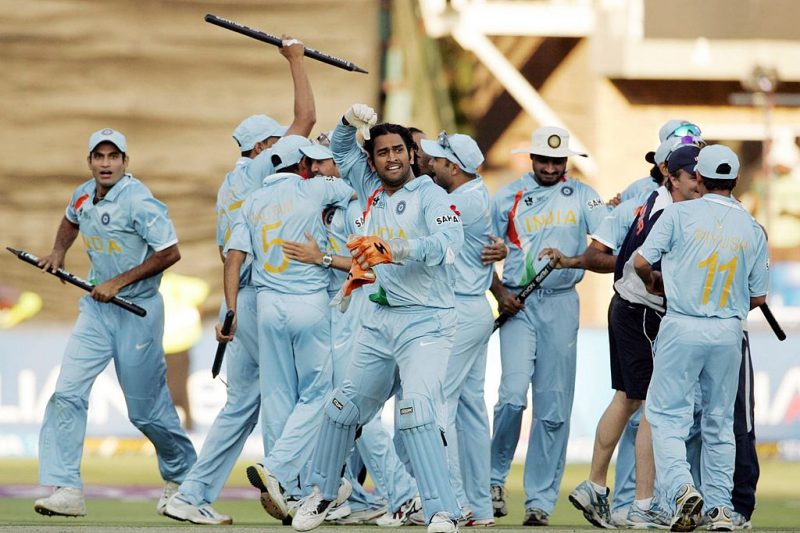 MS Dhoni celebrates with the rest of his team, after leading India to victory in the inaugural World T20 final, over Pakistan

In his first tournament as India captain, Dhoni impressed many with his shrewd, calculated decision-making, as India out-wit and out-strategised the opposition on their way to the title.

“What you want to achieve as a team is to win the tournament but that’s a long-term goal,” he said. “Ultimately, what you do is to break it into smaller things. And It’s not always about few of the individuals performing a lot better than the whole lot. What you want is for everybody to contribute. That one wicket at that right moment, that outstanding catch.

"I would say I feel equally frustrated. I also feel angry at times, disappointed. But what is important is that none of these feelings are constructive."

“Ultimately, winning or losing comes to each and every individual who is part of the team. In a team sport, everybody has a role and responsibility. Throughout the [2007] T20 World Cup, the roles and responsibilities given to individuals was fulfilled to the best manner possible. That was the reason we won the tournament.”

Among the calls he made en route to that memorable title win are turning to Robin Uthappa and Virender Sehwag, neither of them frontline bowlers, to win India their group stage clash against Pakistan via a ‘bowl-out’ after the scores had been tied.

“There was something particular about that World Cup. The ‘bowl-out’ was one of the things. I remember we would go for practice. Before every practice session, we would practice ‘bowl-out’ before or after the warm-up. We said it very clear, it is for fun, but at the same time, whoever hits the wicket most number of times, we will use him if the situation arises.

“It has got nothing to do with I am a bowler, this is my job. It’s like a performance thing and we will keep doing it every day, and whoever has the best hit-ratio are the ones who will be used.”