West Indies batsman Chris Gayle has clarified that he has not retired from ODIs and continues to be available for West Indies Cricket in the 50-over format “until further notice”.

“I didn’t announce any retirement,” Gayle stated in a short clip posted by Windies Cricket after the concluding ODI of the three-match series against India.

Gayle appeared in his 301st ODI at the Queen’s Park Oval, amid indications of the match being a possible one-day swansong for the 39-year-old.

With West Indies batting first, Gayle walked out wearing a special jersey with the number ‘301’ embossed on the back, instead of his customary No.45.

After enjoying a 115-run stand with Evin Lewis for the first wicket, Gayle departed for a rapid 41-ball 72, with the Indian players congregating around him, and greeting him individually. He walked off with his trademark helmet-on-handle celebration, acknowledging the Port of Spain fans.

"To my knowledge, he hasn't retired. But today was an example of his career. The knock he played was outstanding"

In the previous game, Gayle, who debuted in 1999, overtook Brian Lara’s ODI tally of 10,405 runs to become West Indies’ highest run-scorer in the format.

In February this year, Gayle had announced that the 2019 World Cup would be his last ODI assignment, stating that “definitely, in 50-over cricket, the World Cup is the end for me”. Towards the latter half of the tournament, however, he reversed his decision, declaring that he would “definitely play” the home series against India in August. 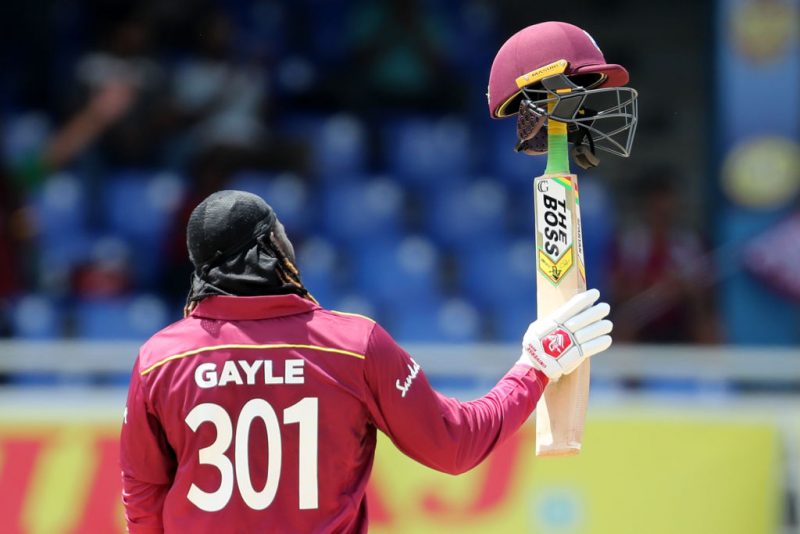 Gayle sported a special ‘301’ jersey at Port of Spain

Indian captain Virat Kohli, oblivious to Gayle’s latest declaration, was effusive in his praise, calling him a “gem of a human being”.

“Chris, I would like to congratulate him for a great, great career playing for West Indies. He has done so much for West Indies cricket, and he is an icon all over the world. [He is] one of the nicest human beings around. That to me is his nicest quality. For me Chris Gayle the person is the best part of him. He is a gem of a human being. I think he can be really proud of that firstly.”

“To my knowledge, he hasn’t retired. But today was an example of his career. The knock he played was outstanding. He got us off to a really good start. He was entertaining, he showed presence, and that’s just what people have come to expect of Chris Gayle over the years.”