For years, the explosive Glenn Maxwell has promised plenty without always living up to the expectations and not always getting the opportunities to. But in Australia’s hour of need he is finally taking the mantle and the results have begun to show.

The last 11 months or so have been among the most difficult the Australian cricket team has faced in modern history. After the ball-tampering scandal broke out in Newlands, which resulted in lengthy suspensions for David Warner, Steve Smith and Cameron Bancroft, the team tumbled and fumbled into a long downward spiral.

After that episode, Australia couldn’t seem to buy themselves a series win against a full member country across the three formats. They were bruised by Pakistan in UAE, battered by South Africa at home and conceded their first Test series defeat to India on home soil; the win against Sri Lanka came as some solace.

CENTURY! What an extraordinary performance from Glenn Maxwell to bring up his third T20I century from 50 balls. Take a bow! #INDvAUS pic.twitter.com/IsYCMOGRo4

Australia’s problems in limited-overs cricket have been more deep-rooted. Since January 2017, they haven’t won a single one-day international series, even losing at home to England, South Africa and India in that period, their woes stretching back to well before the ball-tampering scandal broke out.

"It'd be nice to bat higher (in the ODIs), but there's obviously a lot of well-credentialed players in our top four and top five that thoroughly deserve their spot"

Their struggles in the shortest format were masked as they pulled off an impressive victory in the trans-Tasman triangular series featuring England and New Zealand in early 2018. Their only other ‘series’ win since February 2017 had come against associates United Arab Emirates in a one-off game.

It is against that backdrop that one must judge the enormity of the Maxwell-inspired T20I clean-sweep of India, that too in India’s backyard against a side featuring Virat Kohli, Jasprit Bumrah and Yuzvendra Chahal. To add greater context to this narrative: India last lost a T20I series at home back in October 2015.

All smiles after a couple of cracking T20s. Bring on the ODIs starting Saturday! #INDvAUS pic.twitter.com/CxdKnByz3s

Maxwell was Player of the Match in both games. In the first he laid the foundation for what should have been a comfortable chase of 127 with a measured 43-ball 56. His dismissal sparked a mini-collapse, but Australia managed to win off the final delivery. In the second game, chasing a more daunting 191, he came out all guns blazing to compile an unbeaten 55-ball 113, sealing victory with a couple of balls to spare.

There was a certain madness to Maxwell’s batting, but behind the towering sixes was a calculative mind picking his options well. This trait was exemplified in how he dealt with Bumrah in the death. With 44 required off the last four overs, Maxwell decided that playing him out in the 17th could’ve swivelled the game India’s way, so he struck a couple of boundaries. Then in the penultimate over, with Australia requiring just 14 off two, Maxwell was content to play him out.

“I think we needed 43 or 44 off the last four overs and [Bumrah] came back on. I suppose it was a key over. If that only went for four or five, suddenly you need 13 an over. And it only takes six good yorkers from him to push that up to 18-19,” Maxwell said. 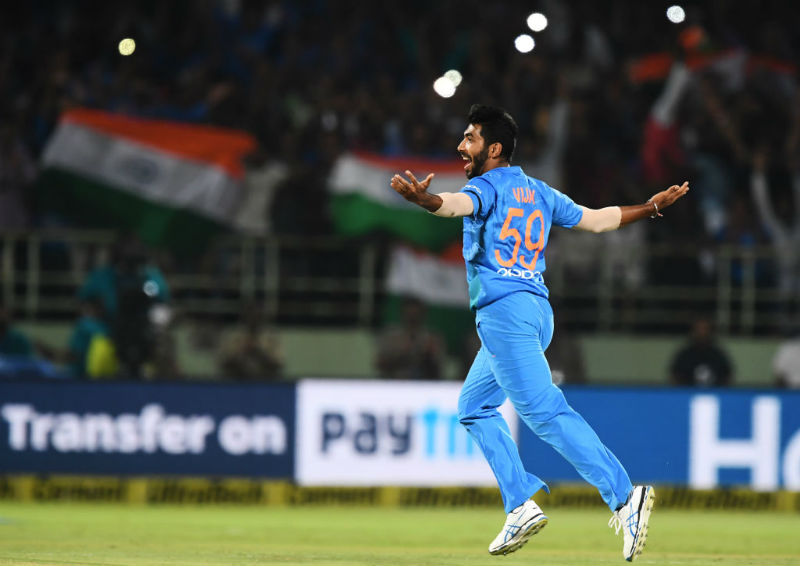 “I’ve sort of changed my approach to him a little bit. Been able to wait for a ball that’s slightly off and capitalise on that. I was able to get him for two boundaries in that over, and keep the run rate in check. I was able to target Siddarth [Kaul] next over and then we only needed 14 off 12 balls, which sort of made the 19th over – as long as we didn’t lose any wickets – pretty comfortable.”

It was also heartening that he’d learnt from his dismissal in the first game, no longer falling into Chahal’s plan to bowl wide outside off to him, while remaining attacking.

Maxwell’s exploits came at No.4 in both games, and that might prompt the Australian management to reconsider his batting position in the ODIs, where he’s been coming lower down the order. During the recent home ODI series against India, coach Justin Langer stuck to his guns in saying that Maxwell’s big-hitting skills could be better utilised in a finisher’s role.

“There’s always been that, sort of in the background, where we’re trying to move forward but we know that these guys are going to be back at some stage."

Paine can't wait for banned trio to return, and to 'completely move on' from the sandpaper scandal.https://t.co/PA6HaQ6lYw

When asked whether he would like a promotion in the upcoming ODIs, Maxwell offered a balanced response while acknowledging that if the opportunity arose he would “love to take it”.

“It’d be nice to bat higher, but there’s obviously a lot of well-credentialed players in our top four and top five that thoroughly deserve their spot,” he said. “So if an opportunity does come up, I’d love to take it.

“Even when I came in tonight, there were 15 overs to go, I think. That’s still 15 overs to bat and I was able to get 100, so even if I’m doing that at No.7 or No.6 it doesn’t really matter. I suppose it’s just about me making the most of opportunities when I do get them.”

When you get a good stick, never ever give it up ? #INDvAUS pic.twitter.com/X2tOY97Zjb

Maxwell has always been an entertainer, on and off the field. But like with his batting in the series, there was an air of self-confidence and maturity in the way the 30-year-old spoke in the press conferences after both games, while still retaining a distinctly mischievous flavour which had the mostly Indian contingent of journalists smiling. “The crowds keep calling out Dhoni and Kohli non-stop the whole time … even when they’re not batting,” he observed with a cheeky smile when reflecting on the challenges touring teams faced in India.

This series win will be a mighty morale-boost for Australia, and with the ODI World Cup looming on the horizon that is going to be crucial. In accomplishing this, Australia have shown that they can defeat the best of teams even without Warner and Smith. There’s little doubt that those two will only fortify the team’s batting stocks. But if Australia are to truly be a contender for their sixth title, one suspects Maxwell will have a key role to play.